PARIS — Swarovski has outfitted a second store for its brand-reboot project, remaking an outpost on the French capital’s Avenue des Champs-Elysees with entire sections swathed in pale green, pink or yellow, and wall-to-wall carpet.

“Colors are very important to the strategy,” said Swarovski creative director Giovanna Engelbert. She and chief executive officer Robert Buchbauer spoke to WWD from a curvy yellow velvet sofa on the second floor of the newly-outfitted boutique to discuss the brand’s new products and image.

Under Buchbauer’s direction, Swarovski is seeking to nudge the brand upscale, moving away from the competitive, accessibly-priced space with a more timeless approach and Engelbert overseeing creative direction.

Engelbert likened her involvement with the house to having the keys to a crystal Willy Wonka factory. She said she started out by reviewing hand drawings by the group’s founder Daniel Swarovski, from over a century ago, as he set up the crystal-cutting machines.

She began with jewelry that emphasizes crystal cuts. Her “Collection I,” made up of necklaces, earrings and bracelets, features large, cushion-cut stones with nearly invisible, suspended settings and without the coat of shiny backing often used for a mirror effect.

“The choker, for me, it’s ‘Let’s strip down design,’” she said, then pointed to a bracelet. “All you see is crystal flying around your wrist,” she added. “That was the starting point, the clear crystal to just look at the crystal in its pure geometry.”

Color was added next, evoking the spectrum shown when light is refracted in a crystal. Possibilities are endless, when one considers the cuts, shapes, colors and coatings, noted Engelbert.

Merchandise is presented in octagon-shaped compartments reminiscent of retro jewelry boxes. They line the walls, each compartment filled with a piece of jewelry or a figurine – or shiny, miniature statues of people in real-life situations, layered with jewelry.

“She’s on the phone making calls, she’s drinking coffee, she’s voguing,” said Engelbert, nodding at the various statues jutting out of the velvet-lined walls, made from three-dimensional scans of real people from different cities.

Walls are organized with merchandise arranged from thigh-level to above the head. Oversize crystal components serve as decoration, lining the strip of space below, while large, pear-shaped crystals — the kind you’d see on a chandelier — decorate the area near the ceiling.

Customers are invited to sit on a sofa while salespeople bring the products on trays for a personalized experience, Buchbauer and Engelbert explained, noting that the current set up serves as an installation to show the new branding.

Engelbert said the idea was to appeal to a wide audience, “from the grandma to the kid to the mother to the fashionista.” 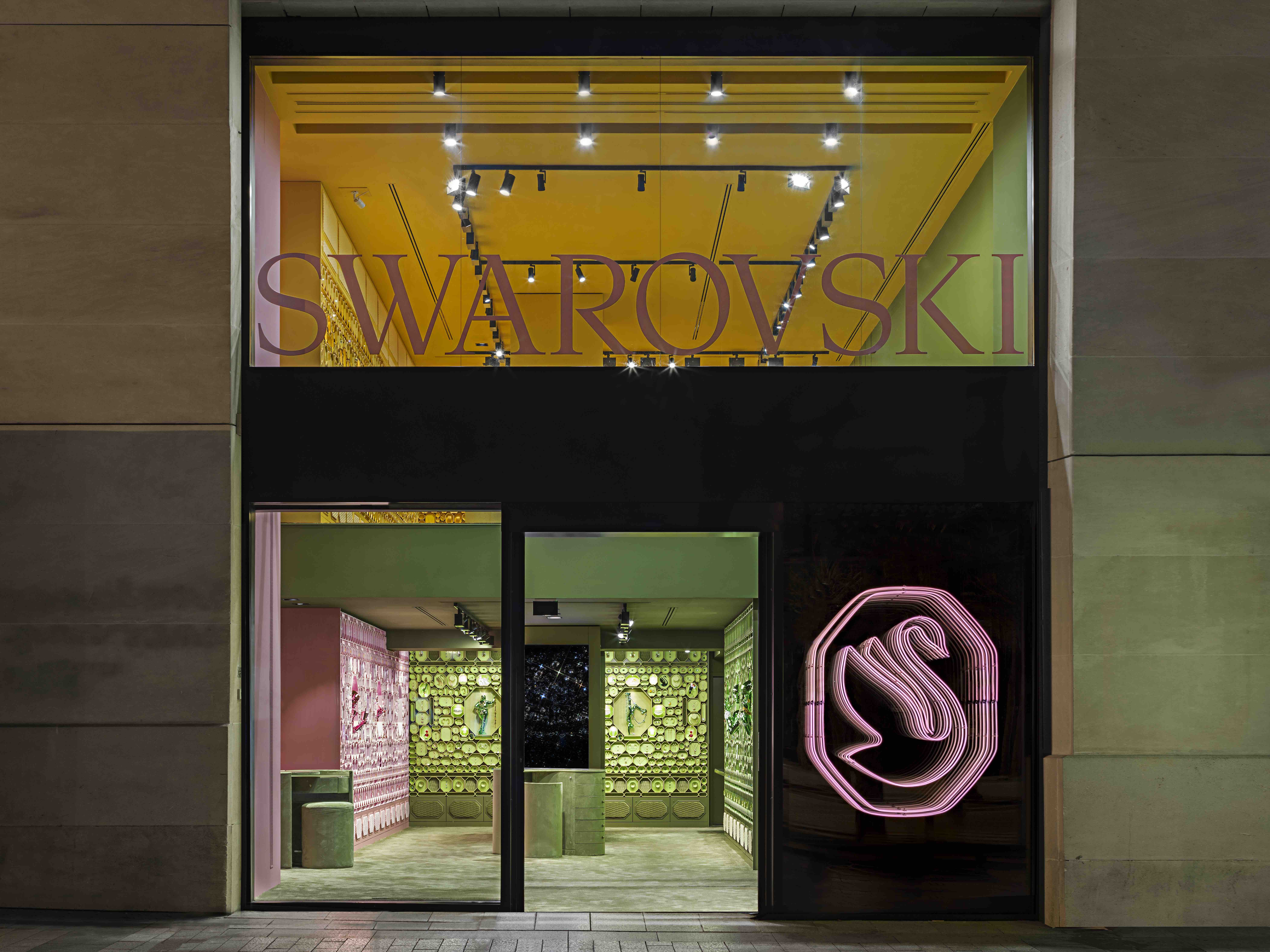 Product categories are mixed together, and include small figurines, pens and jewelry — a mini Batman figure posed valiantly in one compartment, for example, with a delicate pair of earrings on one side, and a watch on the other. Would that prompt unintended purchases?

“I would call it enhanced browsing, because people really like to explore. First you see a huge number of things,” said Buchbauer. He noted that people tend to zero in on the contents of the little compartments.

“If you ask us about store metrics, we could tell you it’s being received really well and we’re happy with the results,” he said, cautioning that it is still early in the process.

“These few stores have the main task of showing what we’re up to, there’s something entirely new at Swarovski and the starting point was to artistically curate our offering,” he added. The pair opened the first store with the new concept in Milan last month; New York is the next stop, slated for April.

Rolling out the concept into hundreds of locations would call for a certain amount of standardization and sales processes, which they continue to work on. The brand began testing new omnichannel services before the pandemic hit, an area it intends to continue developing. Digital channels add a convenience to the sales process, in how products and services are presented, as well as interaction with customers, noted the executive.

“It’s early days, we haven’t even started the advertising campaign; It’s still word of mouth and teasing…reactions are fantastic,” said Buchbauer.
“We used this worldwide crisis as an opportunity to rebuild everything and come out even stronger and people appreciate that because there’s a lot of positive messages built into this approach and into this repositioning strategy,” he added.

The company, which has workshops in Wattens, Austria, has been phasing out the lower end of the components market as part of the upscaling drive, but plans to continue working with a select group of fashion designers.

“We have two approaches, one is what the designer envisions for creations and the other hand, what we have in our huge archives,” he said, noting there are around 100,000 SKUs in loose stones.

Crystals could be plucked out of the archives, or something entirely new can be created.

Top categories at Swarovski vary from market to market, due cultural preferences. In France, for example, prominent earrings and rings are especially popular, Engelbert noted.

As for the digital realm, Buchbauer noted the company generated 30 percent of revenue through online channels last year.

“Digital has been a buzzword for so many years — during the past twelve months, everything that we’ve talked about before had now to prove what it can do for us,” he said, noting that up to 90 percent of the label’s stores were closed at one point.

The executive added that technology played a key role in drawing up the new brand identity over the past year.

“Everything you see, thousands of products designed from sketch to finished, technically developed products, on Zoom, on Teams, on Skype — you name it,” he said.

“Lots of Fedex,” chimed in Engelbert.