Home » Business » The Case of the LVMH Letter 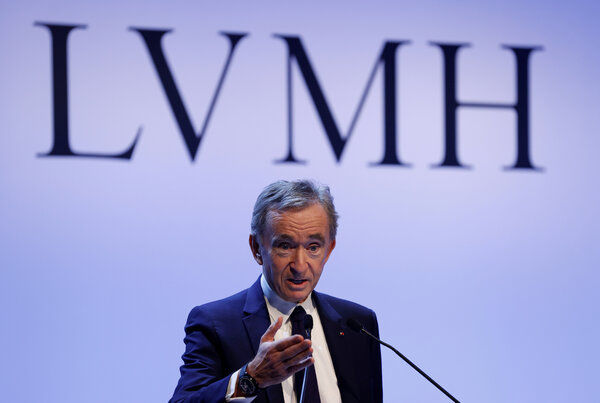 We are holding a DealBook Debrief call today as part of The Times’s special project for the 50th anniversary of a seminal Milton Friedman essay that changed the course of capitalism. R.S.V.P. here for the call at 11 a.m. Eastern and see below for more details about our special guests.

Want this in your inbox each day? Sign up here.

LVMH declared yesterday that its $16.2 billion takeover of Tiffany was effectively dead, citing a highly unusual request by the French government to delay the closing of the deal. Not surprisingly, Tiffany has sued to force completion, dismissing LVMH’s “baseless, opportunistic attempts to use the U.S. social justice protests and the Covid-19 pandemic to avoid paying the agreed price.” The fight over the deal, agreed to nine months ago, is full of drama, M. & A. machinations and political intrigue.

BREAKING — LVMH’s latest maneuver: The company plans to bolster its case by claiming that Tiffany has been mismanaged, violating the terms of the deal, in a countersuit expected within days. LVMH also plans to file for E.U. regulatory approval, which the conglomerate believes undermines Tiffany’s argument that it is slow-walking the deal process.

A key factor in the fight is a French government letter to LVMH. The foreign ministry asked the company not to close the deal until January — well after the transaction’s late November deadline — as France looks to “dissuade the American authorities” from imposing threatened tariffs on luxury French goods. LVMH sent Tiffany a translated copy of the letter, but hasn’t released the French text. (A representative of Tiffany has reviewed the original letter, according to a source.)

Language — and intent — matter here. Under the merger agreement, LVMH is not required to close the deal if there is an “order” from the French government. Whether the letter meets that standard is under debate — and litigation.

• Bloomberg reported that Bernard Arnault, LVMH’s chairman, sought help from the French government in pulling out of the deal. When asked by a reporter whether LVMH requested such help, its C.F.O., Jean Jacques Guiony, said: “You must be joking. Are you seriously suggesting that we procured the letter? I don’t even want to answer that question.” He later said that the letter had arrived unsolicited.

Whether France really wants to intervene is another matter. It wouldn’t have been the first time — France effectively blocked G.E.’s takeover of Alstom’s train unit, and once deemed Danone yogurt a product of “national importance” after rumors of a bid from Pepsi — but it’s unclear whether Paris has the appetite to use the Tiffany deal as part of its trade fight with the U.S. That said, Reuters, citing a French government source, reported that the letter was meant merely as “advice,” not an order.

This may get resolved in court. Tiffany’s shares closed down 6 percent yesterday, but their value remains well above pre-deal levels, suggesting that investors expect the deal to end up renegotiated rather than scrapped. Advisers to the American jeweler argue that their lawsuit, filed in Delaware, is strong: They had been preparing for a possible walkout for months. And LVMH has plenty of U.S. assets that they could pursue for damages, they say. 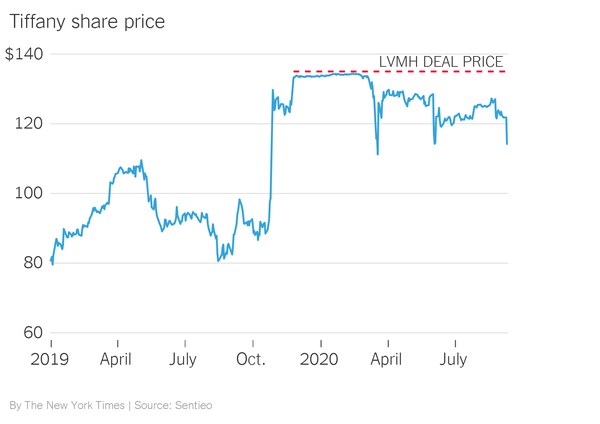 If the deal dies, what’s Tiffany’s plan B? The pandemic has hit tourism, a key driver of luxury retail, and that comes on top of a long-term decline in marriage rates, which has dampened demand for rings. Despite these challenges, Tiffany renegotiated its debt covenants this summer and beat analysts’ earnings expectations in its latest quarter.

• If the deal goes down, it would be the second-largest to fail this year, behind Xerox’s aborted $35 billion bid for HP and ahead of the $12.7 billion takeover attempt of Qiagen by Thermo Fisher.