Every year women do trillions of dollars’ worth of unpaid household work. In the United States alone, that total amounted to roughly $1.2 trillion in 2019, a figure nearly the size of the New York State economy.

The fact that the economics establishment counts these chores as work — work still done disproportionately by women — and assigns them value is a win for feminist economists who spent decades arguing that much of women’s contribution to society was economically invisible.

Now Nina Banks, an associate professor of economics at Bucknell University, is taking that idea another step. She argues there is another form of work that has been historically overlooked and uncounted: community activism by Black and other marginalized women.

“Not only are we doing paid work for our communities and unpaid work in our households,” Dr. Banks said. “We are also doing a third layer of community work — we’re exhausted.” Recognizing this collective activism as work reveals the extra burden Black and brown women are under, she said.

In an article published in the December issue of The Review of Black Political Economy, Dr. Banks traces this unpaid community work to the early 20th century and the creation of cooperatives and other associations to provide services governments neglected.

She argues that these activities outside the market economy — with no buying or selling of goods and services, and no paid labor — were incorrectly considered political activity. But the grass roots organizations behind the community work improved the environment, housing and access to food. Simply put, if someone else had been paid to do it, it would have been counted as work, and a contribution to the economy.

Dr. Banks has spent years trying to right the historical record on behalf of Black women, a mostly lonely endeavor in economics. While she has been scouring archives, much of the rest of the economics profession has followed the trend toward more math or data-based research in other topics.

Dr. Banks’ interest in revisiting history is less surprising when you consider her most distinctive early memory of economics: As an undergraduate at Hood College in Maryland in the 1980s, an adjunct professor explained the gender and racial wage gap with theories about human capital and worker productivity, suggesting that white men are simply more productive.

She was the only Black student in the class, and during a break she went to the basement and cried by the vending machines. “I was so startled and hurt by what he was saying, and I knew it wasn’t true,” Dr. Banks said. “But I didn’t have the tools to be able to confront him.”

Dr. Banks, 57, grew up in Chambersburg in southern Pennsylvania and earned her Ph.D. in economics from the University of Massachusetts Amherst, choosing the department specifically for its unorthodox approach. 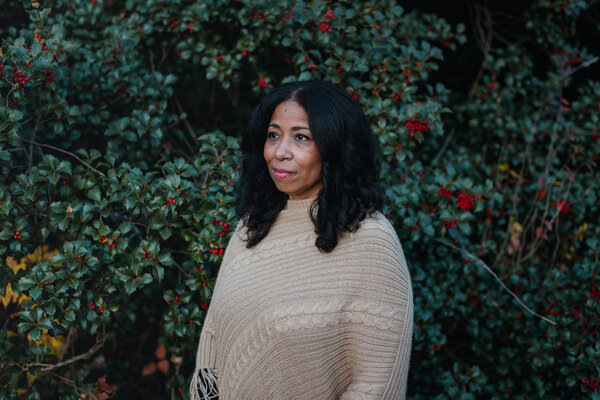 This week, she took over the presidency of the National Economic Association, which has promoted minority economists in the profession for half a century. Former leaders of the group include Lisa Cook, Darrick Hamilton and Olugbenga Ajilore, whose policy ideas and expertise have been sought in Washington. It is a milestone in a career fraught with hurdles, and in a profession where women and people of color have confronted discrimination and harassment.

Two years ago, Dr. Banks said she felt like an “island of one” in economics because she didn’t know others pursuing similar research on collective action as unpaid work and her other historical studies. She’d struggled to get her research published, finding that the economists tasked with reviewing her work didn’t have the right expertise. It happened again with her recent paper on unpaid work, she said. The Review of Black Political Economy, which is affiliated with the National Economic Association but has all articles peer-reviewed, was the third publication she submitted the paper to.

Publishing academic papers is a notoriously slow and frustrating process. But there is a broader concern that the lack of diversity in economics also means certain ideas don’t get as much attention. (And proportionate representation is still far off; just 4 percent of economics doctorates awarded in 2019 to American citizens and permanent residents went to African-Americans.)

It’s partly why some prominent Black economists study economic history, especially those working toward present-day policy ideas to reduce inequality. They first needed to uncover the evidence of systemic disparities.

Dr. Cook, a professor at Michigan State University, spent 10 years getting her research on innovation theory published. She had found that violence toward African-Americans in the late 19th century and early 20th century led to fewer patents filed in the United States, causing a long-term drag on economic growth.

“So much Black economic research,” she said on the NPR podcast Planet Money, “is about first proving that Black people are coming from a historic disadvantage.”

Since Dr. Banks’s 1999 dissertation on African-American women migrating to Pittsburgh in the 1920s, her career has been devoted to uncovering the experiences of overlooked Black women. And so she is particularly well known for charting the life of a fellow Pennsylvanian, Sadie T.M. Alexander, who received a doctoral degree in economics in 1921, the first African-American woman to do so.

Dr. Alexander couldn’t find work as an economist and went on to become a lawyer, notching up another first — the first Black woman to be admitted to the Pennsylvania Bar. But she still considered herself to be an economist, Dr. Banks said, and delivered speeches on the working conditions of Black men and women, using her research skills to defy the dominant ideology of the time of racial inferiority as a legitimate reason for the denial of civil rights. This summer, Dr. Banks will publish a book on the life and speeches of Dr. Alexander.

Today there are more Black economists, but navigating the profession still poses challenges. Over time, support systems have developed, including the National Economic Association and The Review of Black Political Economy, established 50 years ago to be an “hospitable arena” for Black economists to study inequality, Robert Browne, the founding editor, said at the time.

The journal is still where research about race, “especially if you are pushing the envelope,” is published, said Rhonda Sharpe, a co-editor.

The American economics profession has begun to grapple with the diversity problems in its field. In June, when Black Lives Matter protests swept across the United States and then the world, the American Economic Association — the establishment voice for economists — acknowledged “that our professional climate is a hostile one for Black economists.”

More diversity and inclusion initiatives, research avenues and high-profile promotions have sprung up since a 2019 survey by the association found that experiences of sexual harassment and assault were “not rare” for women, and Asian, Black and Latino economists reported “substantially worse experiences” of discrimination than their white colleagues.

Dr. Banks’s career bears these scars too. Her study of Dr. Alexander is the result of a career knocked off course. She originally planned to become a development economist, a field that studies the growth of low-income economies. But in the 1990s, during an internship at a U.S. government agency focused on development, she was sexually harassed by an economist.

“I decided not to pursue development economics as a result of that experience,” she said. Only a little more than two years ago, emboldened by the #MeToo movement, Dr. Banks complained to that workplace.

“When it came time to write a dissertation, I really wanted to focus on something meaningful to me,” she said. “Something that honored the long history of Black women engaging in work for the African-American community.”

The legacy of this switch is apparent in her latest paper. Her goal is to develop a theory “to elevate the community” as a site of production that deserves as much scrutiny as other work. And to highlight the long-lasting impact of these women.

She goes all the way back to 1908, when the Atlanta Neighborhood Union was founded, led by Black women to survey the needs of their community and provide basic social and health services that the city failed to give. It inspired the Women’s Political Council in Montgomery, Ala., which worked to increase voter registration and later engaged in political protests, including the Montgomery bus boycott. It resembles some of the work done today by Black women, such as those in Georgia, to register voters in service of improving their communities and reducing inequality, with remarkable consequences.

In 1985, a group of Black women in Los Angeles came together to stop the construction of a toxic waste incinerator in their neighborhood, enlisting professors and health officials to their cause. Two years later, the city dropped its plans. The group, Concerned Citizens of South Central Los Angeles, still exists as a nonprofit, developing affordable housing, running youth programs and cleaning streets.