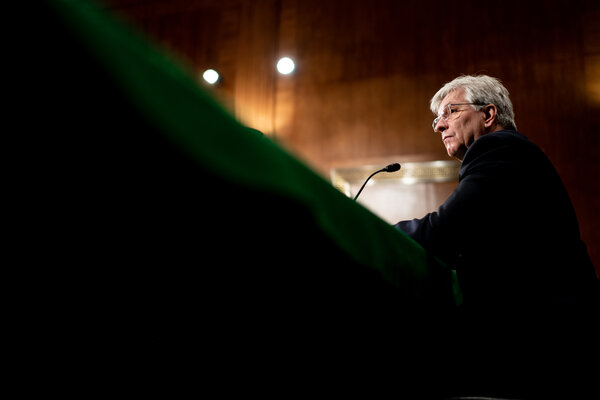 Christopher Waller, the newest governor on the Federal Reserve’s Washington-based board, said on Friday that he expects an unfolding acceleration in inflation — which is expected to intensify in the coming months — will prove short-lived.

“I do buy into the idea that this is going to be temporary,” Mr. Waller said on CNBC, during his first television interview since President Donald J. Trump nominated him to the role and the Senate confirmed him. “Whatever temporary surge in inflation we see right now is not going to last.”

Inflation data are being measured against very low readings from 12 months ago, causing a mechanical year-on-year jump, he noted. Spending tied to government stimulus and supply chain constraints will also have an effect.

“We know the stimulus is going to have some impact, but once the stimulus checks are spent, they’re gone,” Mr. Waller said. “We also know that the bottlenecks that are currently there are going to go away.”

The Consumer Price Index, a closely watched inflation measure, rose 2.6 percent in March from a year ago, the Labor Department said earlier this week. But it was skewed by the comparison to March 2020, when prices of some items fell as consumers pulled back spending in the face of the pandemic.

While the C.P.I. and other inflation gauges are expected to rise even higher in coming months, Fed officials and most economists project that they will settle back down before long. Many officials see key measures hovering near the central bank’s 2 percent average inflation target by the end of the year.

Mr. Waller said that investors themselves are not betting on “outrageous, runaway inflation” and that even if the data show a stronger pickup, the Fed stands ready to contain that and is not going to just let inflation “rip.”

“I don’t think anyone would be very comfortable if it got to three, three-plus and stayed there for a while,” Mr. Waller said, noting that the bigger concern would be if inflation expectations jumped.