Home » The Most Important Lawsuit You’ve Never Heard Of 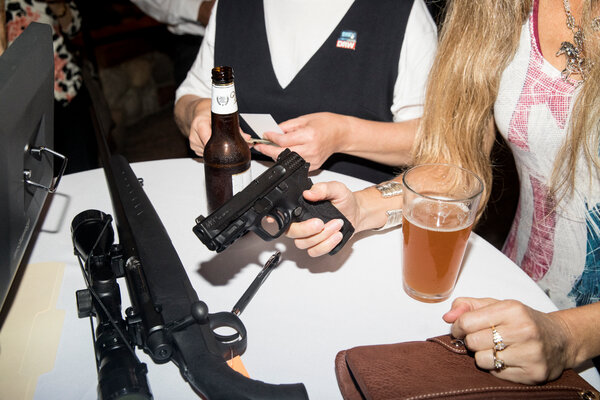 A new front in the gun control fight

Federal laws have protected gun makers from liability from gun crimes and deaths. But officials in New Jersey are taking a novel approach to investigating the industry that hasn’t drawn much attention, Andrew writes in his latest column: They’re going after Smith & Wesson, one of the biggest manufacturers, over its advertising practices.

New Jersey has taken aim at Smith & Wesson’s marketing, in what it describes as a “garden-variety” investigation by the state’s consumer affairs division. At issue are ads like a TV commercial that shows a woman carrying a pistol in a handbag everywhere she goes, from the office to the gym. But nearly everything in that ad is illegal in most states if she didn’t have a concealed carry permit. New Jersey said it’s investigating potential advertising fraud.

The real aim is to unearth internal documents from Smith & Wesson, with the goal of exposing the industry’s workings. Gun manufacturers have been able to resist previous legal fights for such material, including by filing for bankruptcy.

Smith & Wesson’s response: The investigation “seeks to suppress and punish lawful speech regarding gun ownership in order to advance an anti-Second Amendment agenda that the attorney general publicly committed to pursue,” the company argued in a lawsuit to prevent New Jersey from enforcing its subpoena for documents. The company adds that its advertising is protected by the Second Amendment and a federal law meant to shield the gun industry from frivolous lawsuits.

But there’s an exception: The law excludes “an action in which a manufacturer or seller of a qualified product knowingly violated a State or Federal statute applicable to the sale or marketing of the product, and the violation was a proximate cause of the harm for which relief is sought.” In other words, investigating advertising is fair game.

The big takeaway, according to Andrew: This might be the case that finally produces the sort of exposures that helped turn the tide against tobacco companies in the 1990s. “When the industry in question has long felt protected by special laws,” he writes, “it’s possible that the material could be particularly revealing.”

Exxon Mobil adds the activist investor Jeff Ubben to its board. The oil giant appointed Mr. Ubben and Michael Angelakis, a former C.F.O. of Comcast, amid pressure from hedge funds to boost its stock price and shift from fossil fuels. Separately, a top oil industry trade group plans to endorse putting a price on carbon emissions.

The pandemic didn’t hit state finances as badly as once feared. New figures show that many states averted disaster, thanks largely to $600-a-week federal payouts that let the unemployed keep spending — and generating sales tax. The data stoked debate about the additional funding for states included in the $1.9 trillion stimulus bill.

Is it finally time for infrastructure week? President Biden is focused on passing his stimulus proposal, but is expected to call soon after for billions in spending on highways, bridges and more. It won’t be easy: He’ll need either complete unity from Senate Democrats or some support from Senate Republicans.

Private equity C.E.O.s record nine-figure paydays despite the pandemic. Steve Schwarzman of Blackstone received at least $615 million last year, while Leon Black of Apollo collected at least $225 million. Much of that came from dividends paid by their firms.

President Biden expresses solidarity toward Amazon workers seeking to unionize. In a video posted to Twitter, Mr. Biden avoided a direct endorsement of efforts to form a union at an Alabama warehouse. But he warned that “there should be no intimidation, no coercion, no threats, no anti-union propaganda.”

Gary Gensler, President Biden’s nominee to lead the Securities and Exchange Commission, fields questions regularly as a professor at M.I.T. But today, his audience consists of senators on the banking committee, who will vet his nomination by asking him about some of the same topics as his students — like cryptocurrency and financial market plumbing — in a more pointed fashion.

Republicans’ focus, a person familiar with the committee minority’s thinking told DealBook, will be on Mr. Gensler’s record as the chair of the Commodity Futures Trading Commission under President Barack Obama. They believe he revealed a tendency to “aggressively” advocate for regulation and stretch regulatory power to its limits. Their fear is that he will write rules to advance liberal policy priorities, citing climate change specifically.

Corporate climate disclosures will be a hot topic. The S.E.C. last week said it would look more closely at corporate climate statements, and Mr. Gensler’s opening statement calls for “strengthening transparency and accountability in our markets” in general. Democrats say they welcome this.

Bob Menendez of New Jersey intends to ask about increased disclosure of corporate political spending, a spokesperson said. He wants companies to reveal more about their donations and seek shareholder approval for spending.

Chris Van Hollen of Maryland is curious about the rules and limits on the timing and disclosure of insider stock trades.

And then there is GameStop. The committee chairman, Sherrod Brown, Democrat of Ohio, railed against Wall Street during the meme-stock frenzy, and that episode is sure to come up today. A spokesperson for Jack Reed, Democrat of Rhode Island, said that he intends to probe Mr. Gensler about payment for order flow.

The Bitcoin senator meets the blockchain professor. Cynthia Lummis, Republican of Wyoming, is the first senator to hold Bitcoin; she will focus on the nominee’s commitment to “financial regulations that foster innovation,” according to a spokesperson. Mr. Gensler, who teaches cryptocurrency courses at M.I.T. and is also a former Goldman banker, should be game. Alluding to his job at the intersection of finance and technology, the banker-turned-regulator-turned-academic cautiously acknowledged the promise of fintech in his statement and said rules must evolve with new tools.

“We all want to go back to the office, right? We are stuck in our home for such a long time, so painful.”

— Eric Yuan, the C.E.O. of Zoom, on the company’s earnings call

Can private equity craft a deal for Michaels?

Private equity firms are circling the craft supply retailer Michaels, DealBook’s Lauren Hirsch reported yesterday. Though like many brick-and-mortar chains it had struggled to compete with e-commerce, it saw its shares soar during the pandemic as people turned to hobbies under stay-at-home orders and it upgraded its online capabilities.

Companies are looking to capitalize on pandemic business bumps. Jo-Ann Fabrics and Crafts, which was recently on credit ratings watchlists, has filed for an I.P.O. The high-end grill maker Traeger and the golf equipment brand TaylorMade are both considering multibillion-dollar deals.

It’s not clear whether Michaels will agree to a deal, but its biggest shareholder, Bain Capital, may see a good opportunity to cash out 14 years after it acquired the retailer, with Blackstone, for $6 billion. Private equity firms were buying a lot of retailers back then, only to be caught out by the rise of Amazon and prowess of big box retailers like Walmart. Bain took Michaels public in 2014 in a deal that valued it at about $3.5 billion. Its current market cap is around $2.5 billion.

Private equity has money to spend. Buyout groups have about $1 trillion in so-called dry powder. But the competition for targets is fierce, given the billions that SPACs have raised and the lofty valuations they’ll offer any company with growth potential. In retail, there is a stark divide between pandemic-era winners and losers.

A crucial question: What pandemic trends will stick? Michaels has invested in e-commerce, winning accolades from analysts. It’s also started a bulk-buy program catering to entrepreneurs and small businesses. Whether that’s enough to bolster it against a potential downturn in crafting, as people spend less time at home, is a needle a new owner may have to thread.

Democracy for the economy

Today, the Supreme Court will hear arguments in a voting rights case that has elicited a friend-of-the-court brief from over 70 companies, and more than 200 academics and business leaders. At stake is what The Times’s Adam Liptak calls the court’s “most important election case in almost a decade.”

“Business leaders have a strong interest in this case,” the signatories wrote in their brief, which calls for the Supreme Court to side with the Democratic challengers. They argued that “the strength of America’s economy and markets rest on one of the founding principles of our democracy: the right to vote,” and added, “This is not a partisan issue.”

Their brief points to data showing the economic benefits of diversity in employment, and argues that a “diverse and inclusive voting population is “vital to creating an environment that fosters economic growth.”

In going-public news: The online real estate brokerage Compass and the TV maker Vizio have filed for I.P.O.s, while the Korean e-commerce giant Coupang plans to raise as much as $3.6 billion. (Bloomberg, Reuters)

Senator Elizabeth Warren reintroduced a proposal to impose a 2 percent tax on the net wealth of Americans above $50 million. (NYT)

Some White House economic advisers are pushing to weaken the dollar to help American manufacturing. (NYT)

In cryptocurrency news: Goldman Sachs is said to have restarted its crypto trading desk, while MicroStrategy has bought yet more Bitcoin. (CNBC, Business Insider)

Best of the rest

The Boy Scouts of America announced a bankruptcy reorganization plan that would have local councils contribute at least $300 million to trusts for victims of sexual abuse. (WaPo)

Spanish police raided the offices of F.C. Barcelona, as part of an investigation into allegations that the soccer club sought to spread negative comments about its own players. (NYT)

A senior Nike executive resigned after a news report about her son running a sneaker resale business that she helped finance with her credit card. (Bloomberg)