Home » Business » Trump Wants to Discredit the Election. This Nerd Could Stop Him.

The Fox Corporation these days reminds me a bit of America: The elites have lost control, and partisan noise drowns out almost everything. But there are pockets where traditionalists cling to fading norms.

One of those pockets is a new office on the third floor of Fox’s headquarters on the Avenue of the Americas in Manhattan, known by employees as the “nerdquarium.” That’s where a prickly, bespectacled 65-year-old named Arnon Mishkin and his staff of data-crunching wonks will come to work on Election Day. And this Nov. 3, Mr. Mishkin may be the last bulwark against the most frightening prophecies of electoral insanity.

Mr. Mishkin runs Fox News’s “decision desk,” the team responsible for telling Fox viewers — also known as Donald Trump’s base — who won the election. The team and its sister polling unit are among the few endeavors at Fox that have proven immune to the president’s takeover of the network. Mr. Mishkin is a straight shooter — a registered Democrat who told me he voted for Hillary Clinton in 2016, and is paid as a consultant, not as a Fox employee.

“There will be no one putting their finger on the scale in either direction,” he told me with matter-of-fact confidence in an interview on Friday from his Upper West Side home.

Election night is shaping up as a dangerous, high-pressure moment for the country and for television journalists, who traditionally play an outsize role in telling Americans who won our decentralized, locally run national elections. President Trump spent last week working overtime to cast doubt on the validity of the coming election.

But at no place is the tension higher than at Fox, which has served as platform, megaphone and cheerleading squad for Mr. Trump and his counterfactual claims for the better part of four years. And on the night when the stakes are highest, it is up to the unassuming Mr. Mishkin, more than any other individual, to represent reality.

“We’re going to come under enormous pressure,” another top Fox figure told me of election night.

The nightmare scenario goes like this: It’s a close race, and Mr. Trump leads in the early vote count in Pennsylvania, and needs just that state to win the election. Tens of thousands of votes are still untallied, and the counting may take weeks — but Mr. Trump has already declared that he’s been re-elected. He’s demanding that Fox do the same, making calls to Fox Corporation’s co-chairman, Rupert Murdoch, or working back channels to the executive who effectively runs the network, Viet Dinh. Mr. Trump’s most loyal acolytes at Fox, the prime-time hosts Sean Hannity and Laura Ingraham, are backing the president’s claim on the air. And Fox faces the temptation it often succumbs to: offering its audience the alternate reality it wants.

“There’s real concern about the choice Fox is going to make given its own history,” said Vanita Gupta, the president and chief executive officer of the Leadership Conference on Civil and Human Rights, which is among the groups pushing journalists to take their time in covering the vote counts. “Are they going to be a state media organ and sabotage our democracy in the process, or are they going to show up as media that is going to be thoughtful and careful about prematurely calling results before all the ballots are counted?”

I spoke this past week to Mr. Mishkin and other current and former Fox News employees about whether that nightmare situation could play out. Somewhat to my surprise, many said that while they expect Mr. Mishkin to have to compete with Mr. Hannity and others who will echo Mr. Trump’s claims, Fox’s bizarre and chaotic internal politics will probably protect him and the decision desk from any actual interference.

The problem for a meddling president is this: If you want to speak to Fox News — whom do you call?

Outsiders often view Rupert Murdoch’s right-wing media empire as a well-oiled machine, but it is, in truth, a shambolic, shoot-from-the-hip organization. These days, it seems more like the creaky court of an aging monarch than a high-powered or efficient corporation.

It’s been unclear who is in charge at Fox since the network’s founder, Roger Ailes, resigned in disgrace in 2016. Is it Mr. Murdoch, 89, who has been weathering the pandemic in his country manor in Oxfordshire and who is often asleep by prime time in the United States? Or his son Lachlan, the network’s chief executive? A better bet may be Mr. Dinh, the little-known but influential insider who runs Fox News’s parent company for the younger Mr. Murdoch. Or perhaps the network’s chief executive, Suzanne Scott, though Fox insiders say she has long since given up on trying to control her on-air talent?

Mr. Mishkin, for his part, operates independently with an eight-man (they are all men) team of statisticians, political scientists, pollsters and journalists. When I asked him whom he reports to, he fell silent and then tried to remember who approves his expenses.

“The weird thing is the decision desk doesn’t really report to anyone,” a person familiar with the operation told me, on the condition of anonymity so as not to be seen as undermining Fox’s attempts to present itself as a normal news organization. Mr. Mishkin said that executives in Fox’s control room can “kick the tires” when he makes a call. (Mr. Mishkin’s team not only declares a winner of the presidential contest, it calls the results in individual states based on live vote tallies and data analysis.) Fox’s senior executive vice president of corporate communications, Irena Briganti, who participated in my call with Mr. Mishkin, said the decision desk is part of the news division.

Mr. Mishkin and Fox’s chief pollster, Dana Blanton, are part of the wonky, reality-based community of election nerds who populate similar decision desks and polling operations across the media. Mr. Mishkin and Ms. Blanton have also led the charge to create an alternative to traditional exit polls, the large surveys of voters conducted before and on Election Day called VoteCast, in partnership with The Associated Press. The emergence of Twitter has made much of their work transparent to anyone who wants to follow their abstruse if enthusiastic Election Day debates about historical voting patters in key precincts in Waukesha County, Wis. And it is clear that Fox’s operation is well-regarded by its peers.

“Arnon and all the people working on their data are really scrupulous, and I think they do a very good job,” says Ariel Edwards-Levy, the HuffPost’s polling editor.

Mr. Mishkin came to Fox in 1998 with an elite résumé — Andover, Yale, Harvard Business School — and a background in political polling. He got his start working for the New York political consultant David Garth, who helped elect Mayors Edward I. Koch and Rudy Giuliani and advised a local developer named Donald Trump. Mr. Garth also worked for Mayor Tom Bradley of Los Angeles in his failed race for governor of California in 1982. That election gave birth to the idea of a “Bradley effect,” in which white voters lie to pollsters about their intention to support a Black candidate, concealing their racial prejudice and overstating the candidate’s standing. Not everyone believes that happened to Mr. Bradley, but Mr. Mishkin said he learned back then that voters disguise their feelings to pollsters. Sometimes they describe themselves as undecided rather than acknowledging that they are backing a “socially undesirable” candidate — which, he said, helps explain why polls failed to predict Mr. Trump’s victory in 2016. 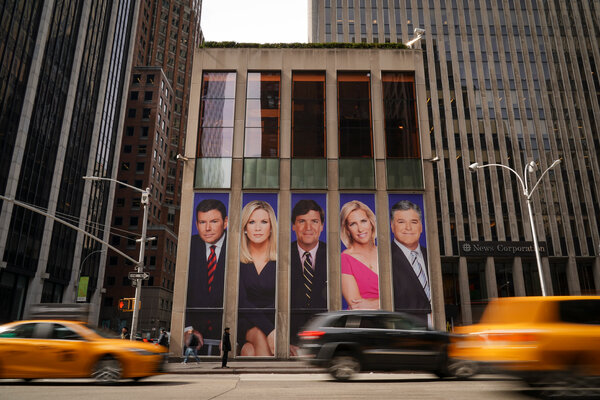 Mr. Mishkin kept his Fox role more or less secret for years because he didn’t want it to interfere with his partnership at Boston Consulting Group, where he advised media companies like Forbes and The Associated Press on internet marketing and strategy. He quietly took over at Fox when his friend and predecessor, John Ellis, George W. Bush’s first cousin, stepped aside after the messy 2000 election.

Many of Mr. Mishkin’s friends and business partners told me they had no idea he was even at Fox until election night 2012, when an unexpected and memorable drama unfolded on air: Karl Rove, a Fox commentator, was emphatically objecting to the decision desk’s call that Barack Obama would win Ohio, and thus, be re-elected. As Mr. Rove fulminated, an anchor, Megyn Kelly, walked off the set, cameras in tow, down a long corridor to Mr. Mishkin’s operation, and demanded to know if he was confident in his call.

An unwavering if not-quite-camera ready Mr. Mishkin, his hands in his pockets, calmly pronounced himself “99.95 percent” certain that Mr. Obama had won. Fox stuck with his call — and with reality.

“It was like Clark Kent and Superman — I didn’t know he was central to that until Megyn walked down the hall,” said Jim Kennedy, the senior vice president for strategy and enterprise development at The Associated Press, who has worked with Mr. Mishkin as a consultant for years. “That’s when I realized — that’s Arnon.”

Mr. Mishkin was running the desk with equal confidence in the summer of 2016, when, a former colleague said, he and his team were dismissive of Mr. Trump’s chances. Eric Bolling, then a Fox Business host who would visit their “nerdquarium” to argue Mr. Trump’s case, complained that the nerds weren’t taking the possibility of a Trump victory seriously enough, the former colleague said. Mr. Mishkin says that, to the contrary, he took Mr. Trump’s prospects so seriously that one of his daughters told him that he was beginning to sound like the innumerate Trump booster Bill Mitchell.

This time around, Mr. Mishkin has been skeptical of Mr. Trump’s chances on social media and in occasional Fox appearances, echoing Ms. Blanton’s polls. One of his friends told me that he’s expressed frustration that Fox won’t put those views on the air. When I asked him about that, he switched to consultant-speak. “As media companies become more and more reliant on subscription revenue, they evolve to telling the readers what they want to hear, and I think that’s true of frankly every journalistic organization in America,” he said.

Mr. Mishkin told me nobody at Fox ever asked him whom he voted for in 2016. Now the question is whether the network will let him do his job when it really matters, on election night. Last time around, 12 million viewers tuned in. Ms. Kelly, who is now the host of an independent podcast, said she was confident he would.

“That night, you’re going to be able to trust who’s out there because it’s run by the journalists at Fox News,” Ms. Kelly said.

If that doesn’t give you total confidence, Mr. Mishkin’s friends say his unbending personal qualities ought to. This is a man who, after asking for a show of hands from his team, confidently faced down Mr. Rove.

“It wouldn’t matter who’s running Fox or what Donald Trump wants,” said his business partner and a Yale connection, Samuel O.J. Spivy. “What Arnon is interested in is who is the winner.”