Home » Business » Uncertainty as industries miss out on job support

Industries hit hard by the coronavirus pandemic are facing further uncertainty after missing out on help in the chancellor’s new emergency jobs scheme.

Hospitality, events and retail workers and businesses expressed concern, as have those on zero-hours contracts.

Rishi Sunak said employees must be in “viable” jobs to benefit from the wage top-up scheme.

This means people working in industries currently closed – such as nightclubs – may lose out as there isn’t any work.

Mr Sunak said he hoped the new plan, announced on Thursday, would “benefit large numbers”, but warned the government “can’t save every job”.

The Job Support Scheme will replace furlough and last for six months, starting in November.

Under the scheme, if bosses bring back workers part time, the government will help top up their wages with employers to at least three-quarters of their full-time pay.

But only staff who can work at least a third of their normal hours will be eligible for the scheme.

The plan to try to stop mass lay-offs was announced after the government introduced further measures to tackle a rise in coronavirus cases.

On Thursday, drinkers in England and Wales faced the first evening of earlier closing times for hospitality venues. Similar measures will be introduced in Scotland later on Friday.

It came as the government announced the UK had recorded 6,634 new coronavirus cases – the highest daily figure since mass testing began. Another 40 people have died within 28 days of testing positive for the virus. 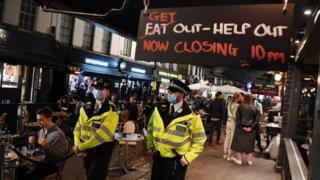 While many in affected industries welcome the government’s effort to save jobs and an extension of the cut in VAT, they feel the increased virus restrictions will put the brakes on recovery and prevent them from earning enough money to stay afloat and take advantage of the government’s measures.

Lisa organises events in a hotel and has been furloughed, along with her partner. She was hoping she would go back to her part-time job in October, if companies started booking Christmas parties.

However, she is worried the 22:00 curfew, announced earlier this week, for pubs, restaurants and other hospitality venues will scupper any Christmas business.

She is not sure whether her employer will bring her back under this new scheme.

“It is worrying for anyone who works in events. I’ve worked in hospitality since I was 16 – but now it is terrifying,” she told the BBC.

Lisa’s concerns are reflected throughout the hospitality and live events industry.

“There’s simply no work to return to, with demand drying up in line with social distancing measures,” said Peter Heath, managing director of the Professional Lighting and Sound Association.

“As a result, the majority of businesses in our sector will not be able to generate sufficient revenue to support their contribution towards employees’ salaries, nor will they be able to contract the huge self-employed community the events industry has become so dependent upon.”

Nightclubs in particular feel aggrieved by the idea of help only going to businesses considered “viable”.

They have been closed since the end of March and say it is unfair they should be penalised because they have been obeying government regulations.

“The situation is simple – because we are closed none of the Job Support Scheme extension is helpful to us,” said Peter Marks, boss of the Deltic group, which runs 53 nightclubs across the UK, employing 4,000 people.

“We have been forced into the place described as ‘unviable businesses’ only because the government have closed us.”

Almost all the group’s staff are still furloughed. He said they might need to look at making staff redundant.

Mr Sunak has defended his decision to restrict the Job Support Scheme to employees working at least one-third of their normal hours.

He told MPs the government had to make sure it was targeting support to where it could make a difference, and to jobs which provided the prospect of long-term security.

But Michael Kill, who runs the Night Time Industries Association, has called on the government to rethink its plans.

“The opening statement by the government made it very clear that it is not possible to save all businesses, all jobs,” he said.

“Whilst we appreciate the veritas of this, to completely exile the entire night-time sector is simply unacceptable.

“The simple message to the government is, more direct support is needed.”

How will the Job Support Scheme work?

That call for targeted support for businesses and organisations that cannot open their doors has been echoed by the UK’s theatres, where the vast majority of venues and productions remain closed.

Meanwhile, Sacha Lord and Amy Lamé, who are the “night czars” of Manchester and London respectively, have criticised Mr Sunak for not doing enough to help their sector.

Todays announcement from the Chancellor, simply isn't good enough for the sectors still shut. I've spoken with @AndyBurnhamGM and we are going to convene a meeting of some of those affected across Greater Manchester, to urge the Government to have a rethink.

The measures announced by @RishiSunak today do not go far enough. London’s nightclubs, theatres and music venues that operate late at night aren't able to reopen at all. Does that mean they don't qualify as 'viable businesses' providing 'viable jobs' ?

Meanwhile, the boss of clothing firm Next has told the BBC that hundreds of thousands of traditional retail jobs may not survive in the wake of the pandemic.

While welcoming the new scheme, Lord Wolfson said there was still a clear threat to thousands of jobs, which are now “unviable” because the lockdown has triggered a permanent shift to online shopping.

Self-employed people will continue to receive support under the measures announced on Thursday, but the chancellor made no specific mention of those on zero-hours contracts.

Before the coronavirus pandemic struck, Samantha Pearmain worked on reception and front-of-house duties in a busy conference centre near Cambridge.

She was on a zero-hours contract and was furloughed between March and the end of July.

The company she worked for paid her 80% of her wages in August, as a goodwill gesture, but now she has no income.

She said she had been hopeful that Thursday’s announcement from the chancellor would include some provision for people like her.

“I feel we’re the forgotten group of people,” she said.

“I really want to know what the government is doing about people like me.”

The Treasury confirmed it was up to employers to decide whether they wanted to change their zero-hours workers’ contracts to make them eligible for the scheme, but there was nothing in the measures to prevent them doing that.

Samantha is looking for work, but is worried there will be an “explosion in unemployment”.

The measures announced on Thursday were designed to prevent that happening when the furlough scheme finishes at the end of October.

The City and Guilds Group, which helps people acquire the skills to get them into a job and develop their careers, said any effort to support employers and save jobs was welcome in the current climate, but the chancellor’s measures were only a small part of the employment puzzle.

“Government interventions need to be less about the here and now, and more a permanent solution to provide meaningful, long-term support to stem unemployment,” a spokesman said.

“Unless we approach the unemployment problem with a more sustainable solution and help people to retrain and re-skill throughout their careers, we run the risk of a whole generation of people being permanently left behind.”