Home » Business » Unemployment Claims Are Down, but Many Workers Lower Expectations

The number of workers filing new unemployment claims fell last week, the government reported on Thursday, but the levels remain achingly high as the incipient economic recovery struggles to maintain a foothold.

The Labor Department reported that 757,000 workers had filed new claims for state unemployment benefits, a drop of 73,000 from the previous week. Another 345,000 new claims were filed under a federal jobless program that provides benefits to freelancers, part-time workers and others during the pandemic. Neither figure is seasonally adjusted.

“Some recovery is better than no recovery, but we want this to be stronger,” said Ernie Tedeschi, managing director and policy economist for Evercore ISI. “It’s at risk of getting knocked off its slow momentum if we get another shock, another wave of the virus.”

While coronavirus cases are again surging in the United States, a second round of federal relief faces opposition from Senate Republicans over a possible $2 trillion price tag.

“The claims remain very elevated, and the lack of continuing fiscal aid for the unemployed is going to weigh on consumer attitudes and consumer spending,” said Kathy Bostjancic, chief U.S. financial economist at Oxford Economics. “It’s a very painful reality for those households who were relying on it.”

Seven months into the pandemic, the nature of the job losses is changing. The hope that business interruptions would be brief and that most laid-off workers would quickly be rehired has faded. Every week, more Americans join the ranks of the long-term unemployed, defined as those out of work for more than 27 weeks.

Benefit limits mean that some of the latest dips in state jobless rolls may not reflect a return to work but rather laid-off workers who are falling off state rolls and shifting to the federal program, or leaving the labor market altogether.

In a speech on Wednesday, Lael Brainard, a Federal Reserve governor, warned that as more layoffs became permanent, job growth was likely to continue to slow.

“The job-finding rate for those who are permanently laid off is less than half the rate of those on temporary layoff,” Ms. Brainard said, “so the speed of labor market improvement is likely to decelerate further if these trends continue.”

In a survey conducted this month for The New York Times by the online research firm SurveyMonkey, just over half — 53 percent — of those who lost jobs during the coronavirus crisis had returned to work. That is up from 38 percent in August, and it is consistent with government data showing that the United States has regained a bit more than half the jobs lost last spring.

Among those still out of work, however, just 39 percent said they thought they would go back to their old jobs.

The gap between the two groups is stark. People who have returned to work say their finances have held up relatively well, and they are about as optimistic as people who never lost their jobs. Finances have improved in the past year for one in four of them, a possible reflection of the stimulus checks and extra unemployment benefits that helped workers early on in the pandemic.

Most who are still out of work, however, say their financial situation is worsening. A third say that their unemployment benefits have expired, or that they tried and failed to get benefits. As a group, the unemployed are pessimistic not just about their finances but about the economy as a whole.

The decline in fortunes has changed the dynamics of the presidential election, now less than two weeks away.

John Michael Purdon, 22, said he had voted for President Trump in 2016 but was now voting for former Vice President Joseph R. Biden Jr.

Mr. Purdon is temporarily working as a substitute teacher near his home in Barnegat, N.J., but that was not the plan. He graduated in April from the University of Pittsburgh and expected to be in a nursing residency at Children’s Hospital of Philadelphia, “but right now, hospitals don’t have the money.”

On June 1, before he found the teaching gig, he applied for unemployment benefits. They didn’t arrive until the end of August, he said.

In his view, the economy is faltering in part because of the government’s mismanagement of the coronavirus pandemic. “I’m a health care professional myself,” Mr. Purdon said, and “certain things were overlooked in trying to rush the economy back too quickly.”

In the SurveyMonkey poll done for The Times, jobs and the economy outranked other issues like health or the environment in importance. Respondents were pretty evenly divided on who would do a better job on the economy, with 49 percent of registered voters choosing Mr. Biden and 47 percent picking Mr. Trump. (On other issues, like handling the pandemic, respondents preferred Mr. Biden over Mr. Trump by a much larger margin.) 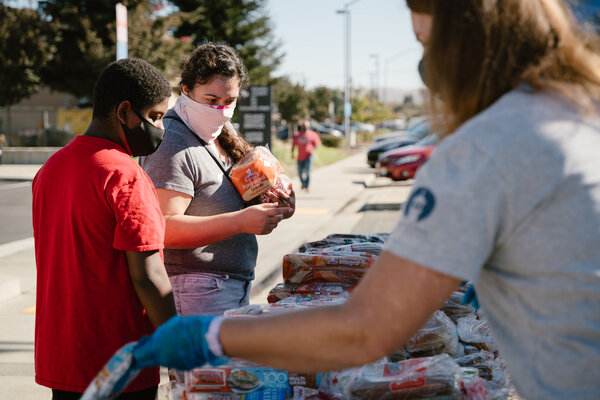 But that gap is explained almost entirely by differences in sex, race and other factors. Women, young people and Black and Hispanic people were more likely to lose their jobs in the pandemic and are more likely to prefer Mr. Biden on a wide range of issues, including the economy.

The Labor Department’s report on jobless claims, which aims to summarize information provided by the states, is the best official accounting available, but it inevitably has its flaws.

According to its calculations, more than 23 million Americans are receiving some form of unemployment relief, but that is probably an overestimate.

States have different accounting methods, and the variety of programs and retroactive payments mean that some applicants may be double counted. There have also been reports of widespread fraud — particularly in the federal Pandemic Unemployment Assistance program, which Congress approved in March for freelancers, the self-employed and others ordinarily ineligible for state benefits.

Thursday’s report from the Labor Department did offer updated figures from California, which had stopped accepting new claims for two weeks while it revamped its system to institute fraud-prevention measures and reduce its backlog.