Home » Business » What C.E.O.s Are Worried About

A programming note: There will be no DealBook newsletter on Thursday and Friday this week. We’ll return on Monday. 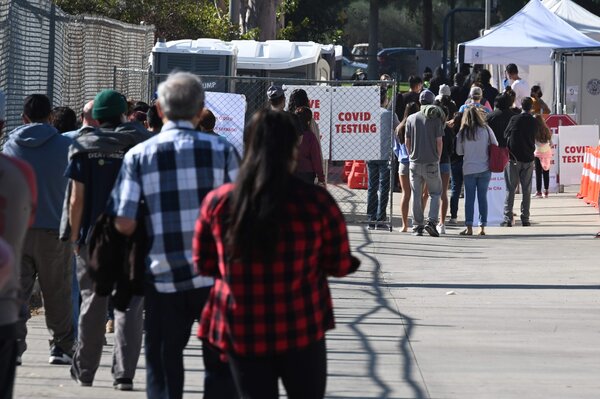 As coronavirus cases continue to rise, Harvard recently convened two dozen executives from companies like BlackRock, CVS Health, Kohl’s, PayPal and Walmart to discuss the pandemic’s impact on business. One professor at the closed-door meeting was Joseph Allen of Harvard’s School of Public Health, who has been advising companies on pandemic-related matters. He spoke with DealBook about what corporate chiefs say when they speak candidly with one another, as they look to the next phase of the pandemic — and beyond.

Preparing to return. Vaccine announcements are welcome, of course, but they raise questions: How should executives interpret data about effectiveness? How will delivery logistics play out? What if employees don’t take the shots? (A recent Gallup poll found that around 40 percent of Americans wouldn’t agree to get the vaccine if it were approved today.) C.E.O.s are grappling with how to verify a person’s health when they enter a business, Dr. Allen said. “Some are already working on the technology end of the issue,” he said, “whereby people could show on their cellphone verification they’ve had a vaccine or a recent negative test.”

Back at the office. When polled at the Harvard meeting, executives ranked corporate culture as their top concern, a worry that grows as employees continue to work from home. “The prospect of it being a year or more is concerning,” Dr. Allen said. As result, executives are increasingly focused on getting employees back to the office safely, whether by investing in air quality improvements or reconfiguring work spaces. But these adjustments are costly, and they affect budgets from facilities to technology, H.R. and elsewhere. “That lens isn’t always there,” said Dr. Allen, who has argued for companies to add a chief public health officer.

Adjusting to a new administration. One session was dedicated to the first 100 days of the Biden administration, especially the president-elect’s stated top priority of dealing with the pandemic. It was led by Harvard’s Sara Bleich and Juliette Kayyem, who said they expected a more coordinated approach from the federal government, driven by the team of health experts Mr. Biden has assembled. That could have business implications, increasing people’s willingness to wear masks and take a vaccine.

A takeover of Simon & Schuster may be the Biden administration’s first big antitrust test. Bertelsmann, the German publisher, is reportedly near a deal to buy its rival for more than $2 billion, beating out Rupert Murdoch’s News Corp. Together, Bertelsmann and Simon & Schuster would control about a third of the U.S. book market, posing a potential competition issue.

Countries plan to relax Covid-19 restrictions. Britain and France announced moves to loosen lockdowns before the December holidays, including letting stores reopen and allowing some in-person gatherings. In the U.S., the C.D.C. is considering shortening self-quarantining guidelines to seven to 10 days, down from 14.

OxyContin’s maker pleads guilty to criminal charges over opioid sales. Purdue Pharma admitted that it misled the federal government about marketing the drug to doctors who prescribed it illegally, as well as to paying kickbacks. The pleas close an investigation that led to a multibillion-dollar settlement with the Justice Department.

The C.E.O. who took on guns is stepping down

Ed Stack, who as chief executive of Dick’s Sporting Goods became an early and prominent voice for corporate America in the debate over gun control, will step down next year after 36 years as C.E.O. He’ll be succeeded by Lauren Hobart, the retailer’s president, who will be the first outsider to run the company founded by Mr. Stack’s father, Dick.

Mr. Stack drew attention for limiting gun sales in 2018, after the school shooting in Parkland, Fla., that killed 17. He halted sales of assault-style rifles, barred those under 21 from buying firearms and urged Congress to pass gun-control measures, moves that inspired Andrew to urge Doug McMillon of Walmart and other C.E.O.s to take stands as well.

It was an unexpected move from Mr. Stack, who hadn’t shown activist tendencies in his decades at the company. He said that watching the news after the shooting made him break down in tears, and persuaded him to do something: “ This system is broken, and we need to do something about it,” he recalled at the DealBook conference in 2018.

Dick’s initially took a sales hit, though its revenues have since rebounded as it refocused on non-hunting items — particularly at-home fitness equipment that became popular during the pandemic. Its stock is now trading near all-time highs.

He became a model of the socially minded C.E.O., as more executives have taken public stands on nonbusiness issues in the Trump era. “If you have ideas about how to solve certain problems, I think it’s your responsibility as business leaders to speak up,” he told The Times last year. “This country is craving for leadership today, and the leadership is not coming out of Washington.” He reportedly weighed a third-party run for president.

With many families staying apart to limit the spread of the coronavirus, the market for turkeys has been upended. “Expectations that people will gather in smaller groups for the holidays this year is resulting in increased demand for smaller turkeys for Thanksgiving tables,” U.S.D.A. analysts wrote in a recent report, in which they trimmed their forecast for fourth-quarter turkey production by 5 million pounds. Although average wholesale prices are up, there are deals to be had as retailers offload larger birds … if you can stomach the leftovers.

Timely reminders from a political influencer

Former President Barack Obama’s new autobiography, “A Promised Land,” shows that the more things change, the more they stay the same. His recollections of leading during a crisis resonate, given that the incoming administration faces similar challenges, like a teetering economy, battles over stimulus packages and ideological ire over hiring.

“Righteous comeuppance for greedy bankers and hedge fund managers,” is how the public saw market troubles in 2008, Mr. Obama writes. He understood, having “encountered enough Wall Street executives personally to know that many (though not all) lived up to the stereotype: smug and entitled; conspicuous in their consumption, and indifferent to the impact their decisions might have on everyone else.” But from his perspective, “it was impossible to isolate good business from bad, or administer pain only to the reckless or unscrupulous. Like it or not, everybody and everything was connected.”

“The same old triangulating, Davos-attending, Wall Street-coddling, Washington-focused, obsessively centrist version of the Democratic Party,” summarizes progressives’ critique of some of Mr. Obama’s hires. When building his administration, “each appointment signified my true political intentions, evidence of my tilt to the right or to the left, my willingness to break from the past or peddle more of the same,” he writes. “Choices in people reflected choices in policy, and with each choice, the chance of disillusionment grew.” For his economic team, he chose “experience over fresh talent.” His priority, he recalls, wasn’t “remaking the economic order” but “preventing further disaster.” This meant choosing experienced crisis managers who could calm markets, “people who, by definition, might be tainted by sins of the past.”

The “clueless attitude” of Wall Street executives who got bailed out, combined with rising unemployment and foreclosures, prompted Mr. Obama to smoke more instead of quitting cigarettes as he’d vowed. Leaders of many major banks had authorized more than $1 billion in year-end bonuses after receiving government loans. “Their obliviousness drove me nuts,” he writes. “It wasn’t just that Wall Street’s attitude toward the crisis confirmed every stereotype of the uber-wealthy being completely out of touch with the lives of ordinary people. Each tone-deaf statement or self-serving action also made our job of saving the economy that much harder.” He was particularly miffed by the “chutzpah” of Lloyd Blankfein, then Goldman Sachs’s C.E.O., and Jamie Dimon, JPMorgan Chase’s chief, “the two savviest operators on Wall Street.”

“We ended up satisfying no one,” Mr. Obama concludes about efforts to “straddle the line between the public’s desire for Old Testament justice and the financial markets’ need for reassurance.”

The health care unit of JD.com, the Chinese e-commerce giant, plans to go public in Hong Kong at a nearly $30 billion valuation, raising up to $4 billion. (FT)

Representatives Alexandria Ocasio-Cortez and Ilhan Omar, both progressive Democrats, pushed to block Bruce Reed, a longtime Biden aide, from taking a role in the new administration, calling him a “deficit hawk.” (Axios)

JPMorgan Chase will pay a $250 million fine over what a regulator called a “pattern of misconduct” in its asset and wealth management division. (CNBC)

What’s next for Jared Kushner and Ivanka Trump? They appear to have plans in New Jersey. (NYT)

The French tax authorities have begun demanding digital tax payments from U.S. tech giants like Amazon and Facebook, as talks over a global tax agreement have stalled. (FT)

Best of the rest

A good read for the holiday weekend: “Meet GPT-3. It Has Learned to Code (and Blog and Argue).” (NYT)

“Happiness Won’t Save You” (NYT Opinion)