Home » Business » What if Highways Were Electric? Germany Is Testing the Idea.

OBER-RAMSTADT, Germany — On a highway south of Frankfurt recently, Thomas Schmieder maneuvered his Scania tractor-trailer and its load of house paint into the far right lane. Then he flicked a switch you won’t find on most truck dashboards.

Outside the cab a contraption started to unfold from the roof, looking like a clothes-drying rack with an upside-down sled welded to the top. As Mr. Schmieder continued driving, a video display showed the metal skids rising up and pushing gently against wires running overhead.

The cab became very quiet as the diesel engine cut out and electric motors took over. The truck was still a truck, but now it was powered like many trains or street cars.

There’s a debate over how to make the trucking industry free of emissions, and whether batteries or hydrogen fuel cells are the best way to fire up electric motors in big vehicles. Mr. Schmieder was part of a test of a third alternative: a system that feeds electricity to trucks as they drive, using wires strung above the roadway and a pantograph mounted on the cab.

At one level the idea makes perfect sense. The system is energy efficient because it delivers power directly from the electrical grid to the motors. The technology saves weight and money because batteries tend to be heavy and expensive, and a truck using overhead wires needs only a big enough battery to get from the off-ramp to its final destination.

And the system is relatively simple. Siemens, the German electronics giant that provided the hardware for this test route, adapted equipment that has been used for decades to drive trains and urban street cars.

At another level the idea is insane. Who’s going to pay to string thousands of miles of high voltage electrical cable above the world’s major highways? 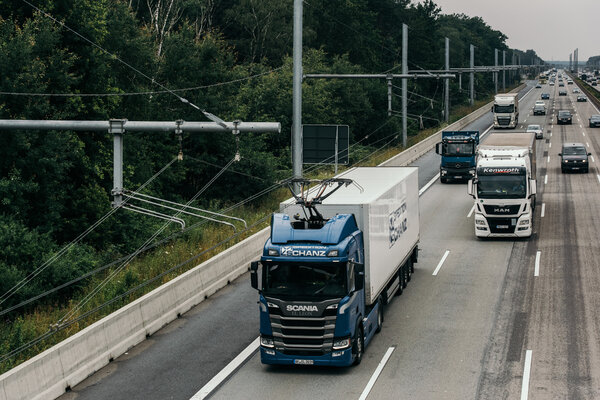 Figuring out how to make trucks emissions free is a crucial part of the fight against climate change and dirty air. Long-haul diesel trucks produce a disproportionate share of greenhouse gases and other pollutants because they spend so much time on the road.

But the industry is divided. Daimler and Volvo, the world’s two biggest truck makers, are betting on hydrogen fuel cells for long-haul rigs. They argue that the heavy batteries needed to provide acceptable range are impractical for trucks because they subtract too much capacity from payload.

Traton, the company that owns truck makers Scania, MAN and Navistar, argues that hydrogen is too expensive and inefficient, because of the energy needed to produce it. Traton, majority owned by Volkswagen, is betting on ever-improving batteries — and on electrified highways.

Traton is among the backers of the so-called eHighway south of Frankfurt, a group that also includes Siemens and Autobahn GmbH, the government agency that oversees German highways. There are also short segments of electrified road in the states of Schleswig-Holstein and Baden-Württemberg. The technology has been tried in Sweden and, in 2017, on a one-mile stretch near the Port of Los Angeles.

So far the sections of highway equipped with overhead cable in Germany are short — about three miles long in both directions near Frankfurt. Their purpose is to test how the system performs in everyday use by real trucking companies hauling real goods. By the end of the year more than 20 trucks will be using the systems in Germany.

Enter Mr. Schmieder, who learned to drive a truck in the German army, and his employer, a trucking firm called Schanz Spedition in the small town of Ober-Ramstadt, in a hilly, thickly forested region about a 35-mile drive from Frankfurt.

If the eHighway is ever going to be rolled out on a large scale, it has to work for companies like Schanz, a family-owned firm managed by Christine Hemmel and Kerstin Seibert, sisters who are great-granddaughters of the founder. Their father, Hans Adam Schanz, though technically retired, was at the wheel of a forklift maneuvering pallets into the back of a truck recently as Mr. Schmieder climbed into the cab for his second run of the day hauling paint to a distribution center in Frankfurt.

Business is brisk, Mr. Schmieder said, because lockdowns have prompted a home-improvement craze and fueled demand for paint manufactured at a factory next door to Schanz’s headquarters.

Mr. Schmieder makes the same run up to five times a day. That’s the kind of route that the eHighway’s backers’ see as ideal.

Hasso Grünjes, who oversees Siemens’ involvement in the project, said it would make sense to first electrify heavily traveled routes, such as the one between the Dutch port of Rotterdam and Duisburg, in Germany’s industrial heartland; or the highway connecting the German ports of Hamburg and Lübeck.

Large numbers of trucks do nothing but drive back and forth between those destinations, Mr. Grünjes said. Trucking companies that use the routes would save money on fuel, their biggest cost, and easily justify the investment in trucks with rooftop pantographs. Longer term, according to Siemens figures, 4,000 kilometers of wired highway, or 2,400 miles, would accommodate 60 percent of German truck traffic. Siemens said Thursday that it would cooperate with the German auto parts supplier Continental to mass produce the pantographs. 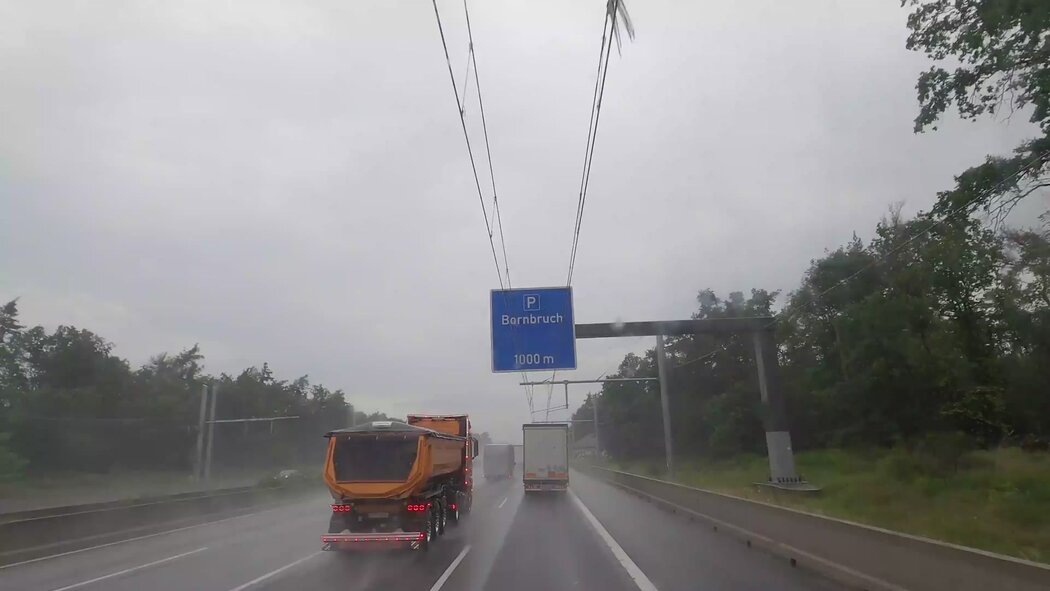 But the onus would be on the German government to build the overhead cables, which cost an estimated 2.5 million euros per kilometer, or about $5 million per mile.

Germany’s Ministry for Environment, which is funding the three electrified highways in Germany, is comparing the results with studies of trucks using hydrogen fuel cells and trucks using batteries. In three or four years, the ministry said in a statement, a decision will be made what technology to support.

“Numerous studies have come to the conclusion that overhead cable trucks, despite the high infrastructure costs, are the most cost-effective option,” the ministry said.

But, responding to questions from The New York Times, the ministry noted that batteries are getting cheaper and better all the time, and charging times are dropping. “In the final analysis the total cost of infrastructure, vehicles and energy will decide what technology or combination of technologies prevails,” the ministry said.

The government is being cautious because of the risk that taxpayers would pay for electrified highways only for the technology to be shunned by the trucking industry or rendered obsolete by something else.

“In theory it’s the best idea,” said Geert De Cock, an electricity and energy specialist at Transport & Environment, an advocacy group in Brussels. But he said the political obstacles, for example getting European governments to agree on technical standards, are too daunting.

“It’s a coordination issue more than a technology issue,” Mr. De Cock said. “We don’t support it because we don’t think it’s going to happen.”

Mr. Schmieder, the truck driver, is a believer. He applied for a job at Schanz in 2019, when the test project was getting started, so he could be part of it.

“I’m always very interested in electromobility and where it’s going,” he said, as he steered the Scania through a narrow valley that leads from Schanz headquarters to the A5 highway. The truck, a hybrid that has a diesel engine, an electric motor and a small battery, passed a sign pointing to Frankenstein Castle, said to have inspired the fictional monster.

The cables also recharged the Scania’s battery, which stores enough power to drive short distances emission-free in urban traffic. That is another advantage of the catenary system: The eHighway could eliminate the need for charging stops, important in the trucking industry where time is money.

“The infrastructure requires a lot of resources,” Manfred Boltze, a professor at the Technical University of Darmstadt, which is providing advice and analysis, said by email. “On the other hand it provides very high energy efficiency and only small batteries are needed for the journeys beyond the overhead cables.”

Mr. Schmieder rested his hands lightly on the steering wheel as autonomous driving software held the truck directly under the cables. He and other drivers underwent a one-day training program to learn how to use the system and deal with problems, such as an accident blocking the lane ahead. That has happened to Mr. Schmieder, he said. He simply steered out from under the overhead cables into another lane using the truck’s diesel engine.

There have been occasional technical glitches. A few times sensors have failed. “But big problems? No,” Mr. Schmieder said.

Technology, pretty much everyone agrees, is not the biggest obstacle to a global network of electric roads.

“We’ve shown it can be built,” Mr. Grünjes said. “The question now is how to build on a larger scale.”