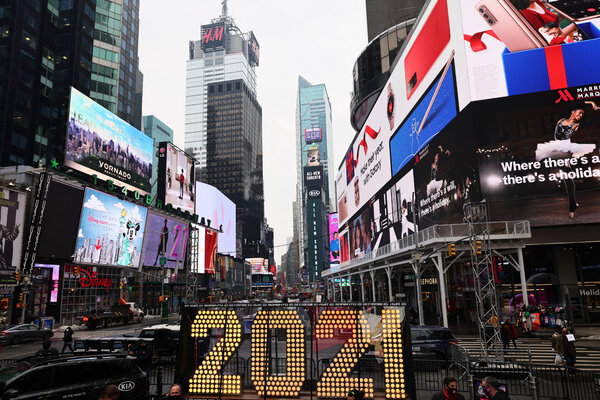 To say that 2020 was stressful is an understatement, what with a pandemic that the world hasn’t yet emerged from, a sharply divisive U.S. presidential election whose controversies have yet to ebb, social unrest over vast inequalities … need we go on?

But as this tumultuous year heads toward a close, let’s take a glass-half-full view and focus on some promising developments heading into 2021.

A spirit of cooperation on a global challenge. In a year-in-review blog post, Bill Gates outlines some of the most promising developments in the fight against Covid-19. Beyond the obvious, like the effectiveness of the Moderna and Pfizer/BioNTech vaccines, Mr. Gates casts the spotlight on less heralded advances.

Perhaps the biggest cause for optimism, he writes, is some restoration in global cooperation: “There’s no way we would be as far along as we are if governments, companies and scientists around the world weren’t, more often than not, working closely together.”

Progress on the climate front. To Mark Leonard, the director of the European Council on Foreign Relations, one of the biggest reasons for optimism is the potential for environmental measures. For example, a study showed that 2020 had the biggest fall in carbon dioxide emissions since World War II.

Even though that was in large part because of pandemic lockdowns, it’s still a basis for hope, Mr. Leonard writes: “We at least know what is possible.”

The spirit of generosity is alive and well. We’ve reported on all sorts of philanthropic efforts this year — Mackenzie Scott’s $4.2 billion giveaway being the most recent — but this one is different: When Ray Dalio, the hedge fund mogul, said this month that he was giving $1 million worth of charity gift cards to the first 10,000 people to sign up for his #RedfineGifting campaign, the response was overwhelming. The cards, which have to be regifted to a charity, were claimed in 90 minutes.

That led Mr. Dalio to organize the giveaway of another 20,000 gift cards. It suggests that the spirit of his initiative has resonated. “My hope is simply that you will experience the joy of receiving a charitable gift rather than a traditional one,” he wrote in the giveaway’s announcement.

A showdown over the military spending bill. President Trump made good on his pledge to veto the legislation, in part because it didn’t eliminate a legal liability shield for internet platforms. Lawmakers had passed the bill with overwhelming majorities, but it’s unclear whether they will override the president. How they act may signal what would happen if Mr. Trump also rejected the $900 billion stimulus.

A flurry of presidential pardons to allies. Mr. Trump doled out clemency to more than two dozen people, including associates like Roger Stone Jr. and Paul Manafort who had been entangled in the Mueller investigation of the president. Charles Kushner, the father of Mr. Trump’s son-in-law Jared Kushner, was also pardoned.

China cracks down on Alibaba. Beijing officials have opened an antitrust investigation into the e-commerce giant, one of the world’s most valuable internet companies. The inquiry into accusations of monopolistic behavior comes after regulators halted the I.P.O. of Ant Group, the company’s financial affiliate, and signals a tougher approach to Chinese tech titans.

Britain and the E.U. are poised to reach a post-Brexit trade deal. The two sides are expected to announce an agreement as soon as today. A deal would be aimed at forestalling disruptions in trade, though the relationship will still include a huge increase in paperwork and border inspections.

Book Entry: The business of basketball

Jonathan A. Knee is a professor of professional practice at Columbia Business School and a senior adviser at Evercore. His next book, “The Platform Delusion: Who Wins and Who Loses in the Age of Tech Titans,” is due to be released in September. He recently wrote about Silicon Valley culture for DealBook.

The convergence of racial justice protests, a pandemic that eliminated crowds at arenas and a broadcasting industry increasingly reliant on live sports presents an opportune moment to tell the story of the N.B.A.’s emergence as a cultural and economic force, as some new books try to do. Its new season, its 75th, also started this week.

In 1976, when the league subsumed its rival, the American Basketball Association, the sport was seen as a marginal sport with relatively few televised games. CBS, which then held the rights, routinely broadcast games on tape delay to avoid conflict with popular series like “Dallas” and “The Dukes of Hazzard.” Today, that would be unthinkable for Turner Broadcasting and ESPN under their $24 billion rights deal that runs through the 2024-25 season and that almost tripled payments under the previous arrangement.

Although the N.F.L. dominates national rights revenue and viewership, the N.B.A. has had far more success internationally. And culturally, the basketball league has long played a greater role in music, fashion and beyond. The stark contrast between its early embrace of the Black Lives Matter movement with the N.F.L.’s initially hostile approach reflected the different demographics not of the players — the athletes in both leagues are overwhelmingly Black — but of the management and ownership groups.

The N.B.A.’s evolution into a central role in media economics and social activism has important implications for business and politics. That makes the journalist Pete Croatto’s history, “From Hang Time to Prime Time: Business, Entertainment and the Birth of the Modern N.B.A.,” timely but frustrating.

The book opens with the 2017 debut performance of the former L.A. Laker Derek Fisher on “Dancing with the Stars” to make a point about basketball’s mainstream relevance, but there are many better examples. Mr. Croatto’s choices may be driven by a lack of access to figures like the former N.B.A. commissioner David Stern, who died this year, or stars like Larry Bird, Magic Johnson and Michael Jordan. Mr. Stern’s innovative strategy of highlighting individual personalities (and rivalries, in the case of Bird and Magic) drove greater interest in the game, while Mr. Jordan’s personal partnership with Nike took the N.B.A.’s ambitions to another level.

“Hang Time to Prime Time” has its moments. The differences in the two basketball leagues’ playing styles and cultures reflected broader social tensions that Mr. Croatto documents well. The institutional resistance to jump shots and slam dunks, along with the ugly fight over introducing the three-point shot in 1979, are put in their rightful, racist context.

The moment when the players’ union saw the N.B.A.’s battered books and agreed to a salary cap to “protect the owners from financial self-harm and save the jobs of the players” is eye-opening. And the symbiotic relationship between rap music and the N.B.A. is lovingly detailed.

Yet Mr. Croatto ends his history around 1990, even though it wasn’t until 1993, when Rupert Murdoch’s fledgling Fox TV network outbid CBS for football rights, that the unfettered escalation in sports rights deals took flight. And the media industry has never recovered.

More successful at covering a similar period is Joshua Mendelsohn’s “The Cap: How Larry Fleisher and David Stern Built the Modern NBA.” Although focused on the drama and dynamics of the 1983 agreement with the players’ union, which made the N.B.A. the first major league to both impose a salary cap and share revenues, Mr. Mendelsohn manages to highlight a number of attributes that still distinguish the league.

Many expected the pandemic to put a lid on the relentless rise in the cost of sports media rights. But when Turner announced a record-setting multibillion-dollar extension of its Major League Baseball deal this summer, it was clear that the dynamics were more complicated. With cord-cutting accelerating, pay-TV companies have felt an even greater need to include live sports. When Mr. Croatto’s story ends, less than 25 percent of top-rated shows in any given year were live sports. Today it is closer to 90 percent.

The ability of the N.B.A.’s players and executives to take on an outsized role in the response to the killing of George Floyd reflects the rise of the league’s economic and social importance. Understanding how it has been able to secure so much cultural capital — and then use it so much more effectively than many other leagues — deserves attention as the sports industry looks to maintain its relevance in a post-pandemic world.