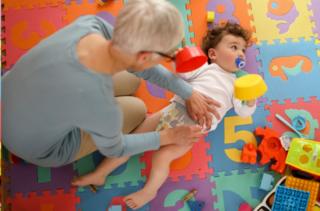 Of all the groups affected by government moves to get schools and childcare settings fully open, the stakes are probably highest for childminders.

No-one else potentially invites infection into their own homes while they work.

Just like schools, many childminders never closed, instead staying open throughout the crisis to look after the children of key workers and children classed as vulnerable.

Childminders are “the unsung heroes of the pandemic”, according to Liz Bayram, chief executive of their professional association, PACEY.

So what’s it been like? How have they approached the vexed questions of social distancing and hygiene with the tiniest of children, and what are their thoughts about taking on more children as the lockdown eases?

“You take each day at a time and use lots and lots of soap,” says Sara, a childminder from Lincolnshire.

Before lockdown started in March she had a thriving business, making at least £2,000 a month – but she’s now down to about a third of that.

She still looks after four children of NHS workers, including one with a parent whose job is in intensive care.

Pausing to think of what she might be inviting into her own home is “terrifying”, she says, but with four children of her own either at – or heading for – university, she feels she has no choice.

In line with government guidance, she is spending a fortune on soap and disinfectant, and insists key worker parents, when they come to the doorstep for pick-up, are showered and in fresh clothes.

She’s washed and put away all the soft toys, replacing them with rubberised or plastic dolls which can go in the dishwasher every night, along with the Lego.

The government recognises that some measures are impossible to fulfil in a family home, she says.

For example, the two metre rule: “That’s just not happening at all – you have to look at the space you’ve got and decide”.

On top of that, removing soft furnishings like carpets, as suggested in the official advice, will be impossible on her current household budget, and it will likewise be impossible to avoid the children she looks after using the same spaces as her family.

No-one is suggesting that childminders should use PPE in the general course of their work – masks are ruled out as children might find them frightening, and in any case they need to see people’s mouths move for speech and language development.

But the guidance suggests childcare settings should have PPE available in case of a confirmed case of the virus, and according to Sara it’s impossible to get locally. “Even hospitals and nursing homes are struggling,” she says.

Sara is planning to reopen her business gradually, aiming to have it back to full capacity by September, maybe adding one new child each month.

“With every new child there comes a new set of germs,” she says. “So you have to work out how many children you can safely allow back.”

She is torn about whether it’s the right thing to do. She understands businesses need to get back up to speed or risk going bust, and some parents will need to get back to work sooner than others, but she adds: “If they can stay at home, I’m going to say that they should.”

PACEY has warned many childminders have been hit so hard by the pandemic they might close for good and a lack of affordable and flexible childcare could blight the chances of a post-lockdown economic recovery.

Earlier this month a survey of members showed about half of those who responded were still open, but on much reduced incomes.

In Sheffield, Claire has lost most of her clientele. She usually has 25 children on her books, but since March it’s been down to four, among them three siblings whose parents are both nurses.

It’s particularly hard as Claire is a single mother of two children, one of whom has asthma.

Her 72-year-old father lives nearby and has chronic lung disease – so she has been leaving food at his door.

She has lost sleep over the risks to her family, but the parents she works with “really trust you and you don’t want to let them down”.

She tries to guarantee hygiene with extra hand-washing and cleaning – and she drops the children home to avoid their parents coming to her house.

With such young children, she says social distancing is hard and asking them not to share toys and resources won’t work: “It goes against everything we try to teach them about good sharing.”

Claire is confused by inconsistencies in the policy: “I can’t have my mum round, yet I can open up my home to potentially 12 different families.”

She says opening up to more children will be “a real balancing act”.

“I have sent an email to my families, saying that until we get further reassurance, I won’t be opening up any further.

“I will try to keep up with the childcare I currently provide to key worker families.

“They really need my support and it will be a greater risk to them if I have other children in my setting.”

Claire hopes her business will survive the summer, and wants to reopen fully in September.

But other local childminders have given up, she says, and even though she loves the job, half of her wonders whether – under current circumstances with “the low pay and the stress” – it’s actually worth it.

Names have been changed.