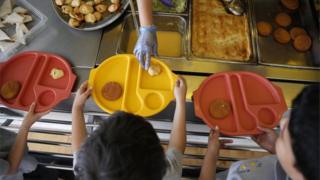 Many families of children eligible for free school meals are experiencing delays of up to a week for supermarket vouchers, despite an upgrade to the website responsible for delivering them

Under a government scheme, families in need in England should receive vouchers worth £15 a week per child.

The Edenred website that runs the scheme was rebuilt over the weekend, the Department for Education says.

But some schools say they are still struggling to log on.

On Tuesday, Danny Sohal, business and resources manager at Chiswick School, in west London, said vouchers the school had ordered on 7 April had finally been approved – although not yet emailed to parents.

But its 8 April orders had still not been processed.

Attempts to log on to the platform were still being met with error messages.

And telephone queuing times were over an hour.

When his call had finally been answered, Mr Sohal had been told the error messages were being sent to try to limit traffic to the site and allow Edenred to work through the backlog, which, he added, could be up to 16 million vouchers.

The Department for Education said the site had been taken down on Thursday for an upgrade to boost capacity in the face of massive demand.

But orders made prior to that should be processed on Tuesday.

Last week, ministers announced the scheme would run throughout the Easter holidays.

About 1.3 million children in England are entitled to free school meals and, until the scheme was announced, schools had been making their own arrangements.

Schools across the UK were closed last month to all pupils except the children of key workers such as doctors, nurses and delivery drivers, some vulnerable children and those with more serious special educational needs.

Here is how Coloradans can apply for student loan forgiveness