Home » Education » Higher education in the UK is morally bankrupt. I’m taking my research millions and I’m off

As academics in England prepare for their strange new semester, I have been making the most of the familiar countryside of the idyllic North Downs in Kent. This summer, the picnics and the walks have been bittersweet: after more than 25 years in the UK, I am leaving to take up a professorship at Hamburg University in Germany.

Why am I am going back to the country of my birth? England no longer feels like home. Instead, since the Brexit vote of 2016, I have felt like a “leaver” in a waiting hall. Now I am going, and the emotional cost will take a long time to come to terms with.

I was from Germany, but I no longer feel I am from there. My seven-year-old son was born in England. His first language is English – he is English through and through. He loves fish and chips; he knows all the players in the England football team (although he’s quite a fan of Wales as well). Now we are going to Germany, and it’s life-changing and daunting for us all.

We’ve decided to go because England seems characterised – not unlike the 1930s – by an impassioned anti-intellectualism that seeks simple answers and negates context and complexity. Now a wave of redundancies is snaking its way through the education sector. While the country is in the grip of a pandemic, and with no vaccine in sight, vice-chancellors have sleepless nights – one would hope – over how to keep their outdated business model afloat.

The problem cannot be fixed unless politicians and university leaders recognise that the commodification and commercialisation of knowledge is fundamentally flawed. Knowledge needs to be free. Bildung macht frei – education sets you free – was the motto of 19th century German social democrats to forge a more egalitarian, classless society. People, they argued, should not be judged by their wealth or class, but by merit alone. A university sector such as the one we have now, dependent on those who can afford to pay, is doomed. It cannot attract the best.

Young people are told they are “consumers” in a shop where they can choose what and when to learn. They can expect a “service”. Some have taken their university to court if their course did not “deliver” promised results. This is no longer a viable, decent learning environment in which students from all walks of life and cultures are supported to achieve their potential. This is not a place in which the next generation of citizens can flourish. The rise in the number of students suffering from mental health issue speaks volumes. A student suicide is “managed” by the media department for fear of bad publicity. What matters are “bums on seat” to keep the ship afloat.

Britain’s cherished higher education sector, once the envy of the world, is on the brink of collapse. The humanities were world leading – and still are in many areas. Scholars in English literature, creative writing, the arts, languages, history and philosophy were acclaimed across the globe. But now the sector as a whole is bankrupt, not just financially, but morally. It has lost its integrity and seems unwilling to engage in critical reflection about the causes of this unprecedented malaise.

Likewise, research is taking a massive hit in post-Brexit, post-pandemic Britain. There is good evidence that the exodus of more than 10,000 scholars from Britain’s universities since the referendum continues unabated. Scotland has lost almost 2,500 academics. Countries such as Germany are beneficiaries of this mass migration of intellectual talent. Scholars and their families are voting with their feet. Britain is experiencing a significant “brain drain”. Life is too short to wait until the country has come to its senses is what most Europeans – and many British academics – think.

Berlin, Hamburg, Copenhagen, Frankfurt, Munich, Paris, Amsterdam, Vienna and all the other major European cities have not been idle. They know this is a historic opportunity to attract some of the best minds in the world. At least one other German professorship has recently been awarded to a senior academic from Britain. I know scholars from around the UK who admit that the only reason for them to apply for grants is to increase their chances of leaving this sceptred isle. 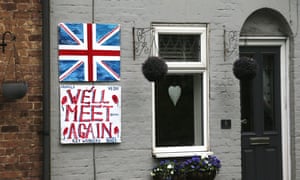 The loss will be counted not only in intellectual and cultural capital, but in financial terms as well. Hundreds of millions of pounds will no longer be spent in Britain, but in the capitals of Europe. Thousands of post-docs and doctoral students will no longer flock to British universities to study with experts in their field but move instead to where they can find the best intellectual climate, the best infrastructure and career prospects. Britain’s attractiveness is waning.

In 2018, we marched with 700,000 for a People’s Vote. We printed our own shirts with graphics from Axel Scheffler’s Gruffalo. One said: “There is no such thing as a Brussalo”. Not everyone got the joke. It was my son’s first demonstration and we combined the trip with a lesson about democracy – and a bit of history too. It gave us hope that all was not lost, that things might turn out all right.

But the ship has sailed. The people (apparently) decided in a referendum to turn their back on Europe and there was no need to ask them again – it was a once-in-a-generation decision. Students and others who had not got up that day to vote later wondered if they should have. They lamented that they had been robbed.

On the day we learned that my wife’s British citizenship application had been successful, my son broke down in tears. For months he had worried that his mother would be “deported” after ministers – Theresa May, Philip Hammond, Amber Rudd, Brandon Lewis – said that EU citizens could be made to leave. The Brexit decision fundamentally changed our outlook on Britain as an open, welcoming society. It changed our sense of belonging. Trust, that invisible bond that links us to other people, had been broken.

Where does all this leave me and my family? I was awarded a €10m collaborative grant from the European Research Council to study the European “common good” with partners in Berlin, Sofia and Budapest. My share of the grant comes with me. The offer from a German university with a higher salary was attractive; the infrastructure and support on offer will be outstanding. So I guess my family and I will be fine. But the sense of loss has been inexplicably sad for me and for my British friends. Emotionally, there are huge question marks in our lives.

Why did all this have to happen? Perhaps we will never have an answer. For me, it has been a British love affair. I look forward to coming back – one day, perhaps. But now it is time to go.

Prof Ulf Schmidt was director of the Centre for the History of Medicine, Ethics and Medical Humanities at the University of Kent. This month he becomes professor of modern history at Hamburg University.