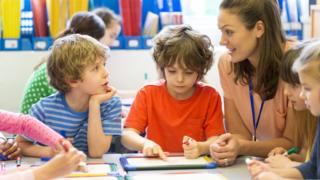 Plans to reopen primary schools in England do not have adequate safety measures and need to be halted, warns an alliance of school teachers’ unions.

A joint statement from heads, teachers and support staff unions calls on the government to “step back” from a 1 June start date.

But in the House of Commons, Education Secretary Gavin Williamson warned against “scaremongering” over safety.

He said “the disadvantaged will suffer the most” with closed schools.

“Sometimes scaremongering, making people fear, is really unfair and not a welcome pressure to be placed on families, children and teachers alike,” he told MPs, in questions over the return to school proposals.

But the Liberal Democrats’ education spokeswoman, Layla Moran, challenged the education secretary to immediately publish the scientific evidence on which the return to school was based.

In a collective response, teachers’ unions have rejected the plans for a phased return of primary school pupils after half term – saying it was still too early to be safe.

“The government is showing a lack of understanding about the dangers of the spread of coronavirus within schools,” said a statement from nine unions, including the National Education Union, the National Association of Head Teachers and Unison.

The union called for a delay to reopening until a “full rollout of a national test and trace scheme” was in place and there were extra resources for cleaning, protective equipment and risk assessments.

“Uniquely, it appears, school staff will not be protected by social distancing rules,” says the statement, which calls for a new taskforce, including teachers’ unions, to plan the return to school.

The joint union statement says that “classrooms of four and five-year olds could become sources of Covid-19 transmission and spread”.

“We call on the government to step back from the 1st June and work with us to create the conditions for a safe return to schools.”

But Mr Williamson told MPs that opening schools was the “responsible” course of action, now the virus was “past the peak” and that safety was uppermost in how it was being planned.

“The best place for children to be educated and to learn is in school,” he said, particularly for the disadvantaged who would be most likely to fall further behind.

Instead of a fixed date for a return, Labour’s shadow education secretary, Rebecca Long-Bailey, argued that schools should reopen only when there was clear evidence it was safe.

“The guidance provided so far does not yet provide the clear assurances over safety that are needed,” she told MPs.

She said that families were still worried about the implications of pupils going back to school, such as for relatives who might have illnesses.

In Wales, the First Minister Mark Drakeford has said schools would not open on 1 June.

In Scotland, it is not expected that schools will re-open before the summer holidays.

In Northern Ireland, Education Minister Peter Weir has spoken of a possible phased return of schools in September.