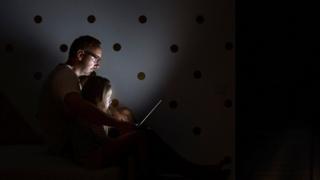 Separated couples exploiting the Covid-19 lockdown to stop an ex-partner from seeing their child could face court action, says a senior judge.

Head of the family courts Sir Andrew McFarlane says children should continue to visit parents they do not live with, as long as both households are healthy.

Family lawyers told the BBC they have been inundated with separated parents arguing over contact during lockdown.

The guidance for parents who live apart states that children under the age of 18 can be moved between their parents’ homes after a sensible discussion, and an assessment that the children are not being put at risk.

But for some parents, trust and communication have broken down, and conversations over child visits can seem impossible.

Sir Andrew, who is in charge of family courts in England and Wales, says those ignoring child court orders could end up facing legal action.

He warns: “If the parents are acting in a cynical and opportunistic manner, then that’s wrong, and the courts will regard it as wrong.”

Samantha Woodham, family law barrister and co-founder of the Divorce Surgery, says she has been overwhelmed with calls for clarification since the lockdown guidance was introduced.

She says she has heard about cases where parents are abusing the system, and is calling for clearer rules on when parents should and should not be changing child arrangements.

Appearing on ITV’s Good Morning Britain, he said children were to remain in the household they were currently in.

But minutes later, on BBC Breakfast, Mr Gove said children under the age of 18 could move between households.

Mrs Woodham is calling for further clarity in the COVID-19 guidance: “The fact that the guidance is permissive, stating that children ‘can’ move between homes, is actually not enough.

“Being told that children ‘should’ move between homes would actually really help parents in this time of uncertainty.”

Alex – not his real name – says he received an email from his ex-partner the day the UK went into lockdown, saying he could no longer see his 10-year-old son, despite a child court order stipulating ongoing visits.

Alex says his ex-partner felt his role as a key worker meant he was at high risk of catching and spreading the virus.

But he says he is working from home 90% of the time, and has been following all safeguarding guidance.

“I miss physically seeing him in front of me, being able to have a laugh, talk, see how his day has been,” he says.

“I totally understand the fear and worry of any parent if your loved ones are in contact with somebody who is a key worker, but that shouldn’t be a reason to punish you.”

Hospital consultant Robert – not his real name – faced a lengthy battle to be in regular contact with his son.

Following the restrictions imposed, his ex-partner suspended all contact except for a short phone call once a fortnight.

He says he feels frustrated that she has disregarded the guidance and his efforts to make it work.

“All of my proposed assurances to strictly observe social distancing and cancel non-essential travel proved inadequate to the mother, who only sees her opinion and interpretation as the final judgment.

“Sadly, I won’t be the only parent subject to this manipulative interpretation of the current guidance.”

Sir Andrew, however, believes the guidance is adequate.

He says that a child’s safety with regard to the virus is a matter for parental judgement, and the courts would not take that away.

He is urging families in conflict to focus on children’s welfare, and to make sure they are in touch with both of their parents.

“Do something you don’t want to do, for the sake of your child.”