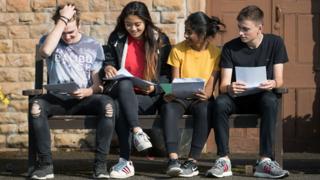 Teachers in England will be asked to assess the grades they think pupils would have achieved in cancelled GCSE and A-level exams.

This will be used by exam boards to decide results – along with a ranking by ability of pupils in each subject in a school, also judged by teachers.

This approach from the qualifications watchdog Ofqual will replace exams disrupted by the coronavirus outbreak.

Results days will be no later than originally planned and may be earlier.

“Our overriding aim in this is to be fair to students this summer and to make sure you are not disadvantaged,” said Sally Collier, Ofqual’s chief executive.

Paul Whiteman, leader of the National Association of Head Teachers, said there was no “perfect solution”.

But he said the substitute plan was “pragmatic and the fairest approach to take in these exceptional circumstances”.

Teachers’ predictions for A-levels and GCSEs in England will be based on the evidence available – such as previous exam results, tests, homework, coursework, mock exams and what the regulator calls “general progress during your course”.

Teachers will be asked to say what they think would have been the grades most likely to have been achieved if the summer exams had taken place – based on an overall professional judgement.

But they will also be asked to put students in order of expected achievement within each predicted grade band.

This will be used to moderate the overall share of grades in schools across the country.

This could mean adjusting the grades being predicted by schools if they seem too generous or harsh – and to make the overall distribution of grades consistent with other years.

Schools are being told they are not allowed to tell students the grades submitted to exam boards or how they are ranked.

Mary Bousted, joint leader of the National Education Union, welcomed the news that “grades won’t be based on mock exam results, or any other single piece of evidence alone”.

But she said teachers could be “uncomfortable” with putting students into rank order.

The UCU lecturers’ union warned that a system based on estimated grades could work against disadvantaged pupils, saying that high ability, poorer students were more likely to be given under-predicted grades.

The results will be available to students no later than the planned dates in August – but Ofqual suggested that they may be available sooner.

A process for appeals has still to be decided.

There have been proposals to have an alternative exam that pupils could take in the autumn – with Ofqual saying arrangements have still to be confirmed.

It also remains uncertain how grades will be decided for pupils who are home-taught and do not have links with schools that could send in predicted grades.

The exam regulator said alternative plans for vocational qualifications would be announced at a later date.