The vote was a breakthrough after weeks of wrangling among White House officials and senators in both parties, clearing the way for action on a top priority for President Biden. 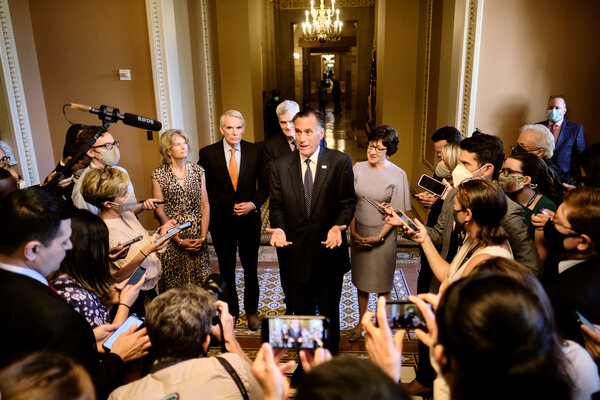 By Emily Cochrane and Jim Tankersley

WASHINGTON — The Senate voted on Wednesday to take up a $1 trillion bipartisan infrastructure bill that would make far-reaching investments in the nation’s public works system, as Republicans joined Democrats in clearing the way for action on a crucial piece of President Biden’s agenda.

The 67-to-32 vote, which included 17 Republicans in favor, came just hours after centrist senators in both parties and the White House reached a long-sought compromise on the bill, which would provide about $550 billion in new federal money for roads, bridges, rail, transit, water and other physical infrastructure programs.

Among those in support of moving forward was Senator Mitch McConnell of Kentucky, the Republican leader and a longtime foil of major legislation pushed by Democratic presidents. Mr. McConnell’s backing signaled that his party was — at least for now — open to teaming with Democrats to enact the plan.

The deal still faces several obstacles to becoming law, including being turned into formal legislative text and clearing final votes in the closely divided Senate and House. But the vote was a victory for a president who has long promised to break through the partisan gridlock gripping Congress and accomplish big things supported by members of both political parties.

If enacted, the measure would be the largest infusion of federal money into the public works system in more than a decade.

The compromise, which was still being written on Wednesday, includes $110 billion for roads, bridges and major projects; $66 billion for passenger and freight rail; $39 billion for public transit; $65 billion for broadband; $17 billion for ports and waterways; and $46 billion to help states and cities prepare for droughts, wildfires, flooding and other consequences of climate change, according to a White House official who detailed it on the condition of anonymity.

In a lengthy statement, Mr. Biden hailed the deal as “the most significant long-term investment in our infrastructure and competitiveness in nearly a century.”

He also framed it as vindication of his belief in bipartisanship.

“Neither side got everything they wanted in this deal,” Mr. Biden said. “But that’s what it means to compromise and forge consensus — the heart of democracy. As the deal goes to the entire Senate, there is still plenty of work ahead to bring this home. There will be disagreements to resolve and more compromise to forge along the way.”

That was evident on Wednesday even as the president and senators in both parties cheered their agreement. In negotiating it, Mr. Biden and Democratic leaders were forced to agree to concessions, accepting less money for public transit and clean energy projects than they had wanted, including for some electric vehicle charging stations, and abandoning their push for additional funding for tax enforcement at the I.R.S.

The changes — and the omission of some of their highest priorities — rankled progressives in both chambers, with some threatening to oppose the bill unless it was modified.