Home » Politics » A Democratic Triumph in Georgia, Overshadowed by Right-Wing Violence in Washington

ATLANTA — Democrats gained control of the Senate on Wednesday by winning both of Georgia’s runoff races, an electoral repudiation of President Trump that will give the incoming Democratic administration broader policy latitude even as the victory was temporarily overshadowed by a violent mob storming the United States Capitol in the name of the ousted incumbent.

The election of the Rev. Raphael Warnock and Jon Ossoff was a political triumph for the Democratic Party in a state that has stymied it for decades. It was also a jarring split-screen encapsulation of the politics of progress and grievance that have defined Mr. Trump’s administration and the changing country he is sworn to serve.

Mr. Warnock’s own Twitter feed showed how quickly the mood among Democrats had shifted. At 1:55 p.m. Eastern, he toasted his victory by thanking Georgia voters, saying he was “forever grateful.” Within two hours, he was quoting another pastor of Ebenezer Baptist Church — the Rev. Dr. Martin Luther King Jr. — with a message of togetherness in the face of hatred and bigotry.

The two Senate races in Georgia, held one day before the Senate was to certify President-elect Joseph R. Biden Jr.’s victory, were runoffs after the November general election. Mr. Warnock defeated Senator Kelly Loeffler, who served for a year after being appointed to the seat by Gov. Brian Kemp of Georgia. Mr. Ossoff defeated David Perdue, who was elected to the Senate six years ago and had been so confident of his electoral position that he refused to debate Mr. Ossoff last month.

With 98 percent of the vote counted on Wednesday evening, Mr. Warnock led Ms. Loeffler by about 68,000 votes, and Mr. Ossoff was ahead by about 33,000 votes.

Georgia has not sent a Democrat to the Senate in two decades, and the party succeeded this year by focusing heavily on voter registration and turnout, particularly in suburban counties and in Atlanta and Savannah. It was a strategy engineered in part by Stacey Abrams, the former state House leader and candidate for governor, who has focused on combating voter suppression in the state.

Mr. Warnock and Mr. Ossoff earned support from a multicultural electorate, powered by Black voters, and built on years of organizing work led primarily by Black women in the state. In addition, a Republican election official, Gabriel Sterling, said directly Wednesday what many in his party had worried might come to pass: that Mr. Trump was to blame for the G.O.P.’s losses after sowing doubt in the electoral process.

The Democratic victories, and particularly the ascension of Mr. Warnock, were another measure of just how much Mr. Biden owes his own victory, and now his expanded power through the Senate, to the Black voters who have long been the backbone of the Democratic Party.

In recognition of how central the support of Black voters had been to his primary victories, Mr. Biden picked Senator Kamala Harris as his running mate. She is the first Black woman and woman of South Asian descent to ascend to the vice presidency, a milestone that came after years of increasing racial representation in Congress and a sweeping Black Lives Matter movement that engulfed the country last summer.

Mr. Biden has made explicit promises to Black voters in particular, saying that he will prioritize their concerns. 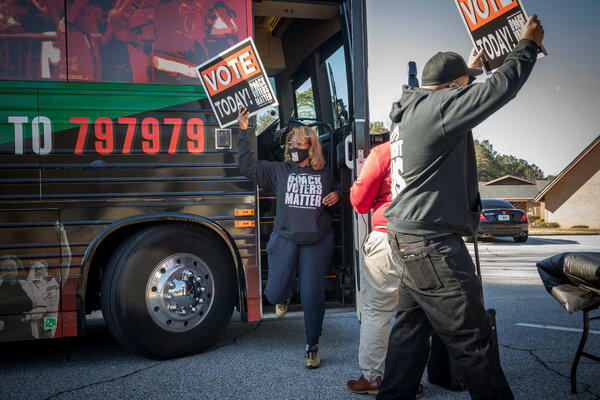 Michael Simmons, a 63-year-old Black man in Atlanta who said he had not missed voting in a major election since 1976, said, “I never would have thunk — put that down, thunk! — I’d see this happen.”

“This was a place where for many years we got the short end of the stick,” Mr. Simmons said, referring to Georgia. “I think there ought to be a lot of gratitude for what we’ve done.”

What Black voters have done is upend conventional thinking about how Democrats should run in the former Confederate South, and which populations can come together for a winning political coalition.

It has been only about 55 years since Jim Crow fell in Georgia, ending a political and economic system that disenfranchised Black residents for nearly a century after the Civil War. For many residents, memories of that era are still clear, and that history, they said, informs the enormous significance of Mr. Warnock’s Senate victory.

Bishop Reginald T. Jackson, the presiding prelate for the African Methodist Episcopal Church in Georgia, said he was thrilled that Georgians would send a Black man and a Jewish man to represent them in Washington.

“I went all over this state,” said Bishop Jackson, 66, a leader in the oldest Black denomination in the country. “Blacks couldn’t wait to get to the polls.”

At the same time, a central feature of Mr. Trump’s America has been the backlash to such expressions of political power. From Charlottesville, Va., to Mr. Trump’s rallies, this era has been marked by open expressions of racial bigotry, a rising number of hate crimes against racial and religious minorities, and a refusal by the president to clearly denounce hate groups.

Even in Mr. Trump’s current claims of election fraud, which are not backed by evidence and have been disproved in court, his supporters have targeted predominantly Black precincts that overwhelmingly back Democrats in an attempt to invalidate their votes and reverse the election results.

Taken together, the latest attempts fit a pattern in which political gains by Democrats are seen by their opponents less as an individual loss at the ballot box than as a sign of a rising multicultural tide that strikes at America’s racial identity.

On Wednesday in Georgia, where older Black residents remember a democracy that explicitly did not recognize Black humanity, some voters and political leaders looked at the scenes in Washington as familiar, not surprising. They did not ask, “What happened to our country?” or look to international examples of failed states, but recalled their state’s history of sedition and voter suppression.

Donald White, a 53-year-old voter in Atlanta who stayed up until the early morning hours to see Mr. Warnock’s victory announced, said the senator-elect’s faith and life experiences made him perfectly suited for this moment.

“He’s a man of God,” Mr. White said. “He’s been through trials and tribulations.”

Bishop Jackson said he was dismayed as he watched the violence unfolding in Washington. However, he did as many Black Americans had before him: He chose to focus on the resilience of those who had survived worse. He viewed the scenes as the last gasp of a bygone America.

“I think it speaks volumes and I think that, despite what you see on television like this, there is still a part of this country that is coming together,” Bishop Jackson said. “That’s the group that Trump speaks for,” he added, referring to the mob at the Capitol, “but it’s a dwindling portion of the country.”

By the time Mr. Ossoff was officially declared the winner in the late afternoon, and the significance of what Democrats had accomplished in Georgia became clear, control of the Senate was secondary to the loss of control in the Capitol.

Republican officials had spent part of the day pleading with the crowds to accept the election results. Democrats called for unity, in what seemed like an equally unlikely prospect.

“I am more optimistic than ever,” Mr. Biden said in an email to supporters in the afternoon, referring to the Georgia election results.

By 6 p.m., Congress was under siege, his election was yet to be certified, and a person shot inside the Capitol building had died.