WILMINGTON, Del. — Another workweek had come to an end, and men and women throughout Delaware returned to their homes for a few days away from the office. One of them just happened to be the president of the United States.

As he had done countless times in his long career in public office, Joseph R. Biden Jr. returned to the Wilmington suburbs from Washington on Friday — this time, as the commander in chief.

In keeping with the general tone of his presidency so far, little commotion ensued.

There were no Twitter outbursts or golf outings, though the winter weather would not have allowed for hitting the links anyway. There were not many Biden sightings, either. Instead, it was a weekend where Mr. Biden was in his most natural state: at home in Delaware, where everyone seems to know everyone, the new president included.

Mr. Biden told reporters that he returned for the weekend “to see my grandchildren and to hang out with Jill to get the rest of the stuff we have to move from our house to the other house,” referring to the first lady, Jill Biden, and their new residence at 1600 Pennsylvania Avenue. Watching the Super Bowl was also part of his plans.

A few things had changed since Jan. 19, the day before his inauguration, when he declared he would “always be a proud son of the state of Delaware” and left for Washington. For one thing, he returned aboard Air Force One — a far grander mode of transit than the trains he would ride to Washington and back in his decades as a senator.

The trip was Mr. Biden’s first on Air Force One as president, though he was aboard a Boeing 757, not the larger, iconic 747. The flight from Joint Base Andrews took just 25 minutes — a significant improvement over Amtrak’s Acela service, which takes about three times as long to get to Wilmington from Washington.

Air Force One whooshed overhead and landed at New Castle Airport near Wilmington shortly after 6 p.m. on Friday as Rob Hicks, 27, and his brother, Kyle Hicks, 25, watched from the back of a pickup truck behind a Burger King just outside the airport.

For the brothers, who work at their family’s aircraft parts company, the new president was not the main attraction, though they spoke positively about him. They were drawn more by the chance to see his plane.

“If you look around, most of the world just keeps going on, but then you get aviation geeks like us,” Rob Hicks said. “Maybe it’s a little bit about Biden, but not so much. It’s more about the plane itself and Air Force One and what that carries.”

While they might have counted as a modest welcoming committee, there was little fanfare to be found during the president’s visit, which took place as the coronavirus pandemic continues to grip the country. At the airport, a large banner offered an enthusiastic welcome — not to Mr. Biden, but to Frontier Airlines, which begins service to Orlando, Fla., this week.

On a busy road not far from the president’s home, electronic road signs alerted drivers that a nearby street — Mr. Biden’s — was closed to through traffic. But there were few other indications that a residence belonging to the president of the United States was nearby.

There remains, however, considerable Biden pride in Delaware. Part of that stems from his ubiquity in such a small state — the nation’s second smallest by land area, after Rhode Island — which he represented in the Senate for 36 years.

After his election victory, a local brewery, Wilmington Brew Works, released a beer called Rail Car One in commemoration of his Amtrak commuting habit. At the Westin hotel in Wilmington, steps from where he gave his victory speech to a drive-in audience, the restaurant has a Biden burger on the menu, with Swiss cheese, jalapeños and ketchup. 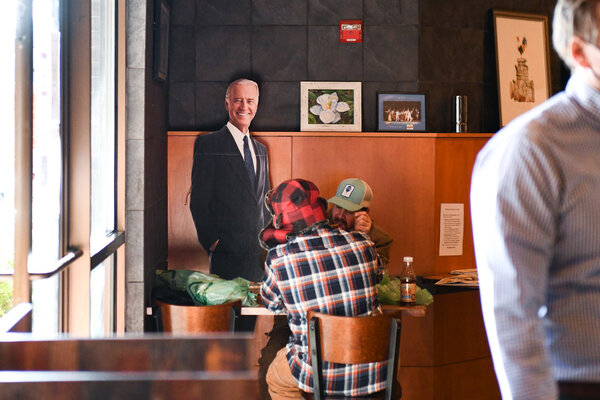 Since 2008, a grocery store near Mr. Biden’s house, Janssen’s Market, has sold a sandwich named for him, featuring maple turkey, havarti cheese, arugula and champagne mustard. Recently, the store also displayed a cutout of Mr. Biden, but took it down in early January. “There was an elderly gentleman that started boxing him,” the store’s owner, Paula Janssen, explained.

The sandwich lives on. “It’s a popular sandwich because it’s just actually a nice sandwich,” Ms. Janssen said. “But it’s gotten a lot more popular since he won the election, that’s for sure. I get people taking selfies in front of the sign.”

For those seeking more than a bite to eat, the Delaware Tourism Office has put together what it calls the President Biden Driving Tour, with several Biden-related destinations around the state, including a rest stop on Interstate 95 called the Biden Welcome Center and the Amtrak station in Wilmington, the Joseph R. Biden Jr. Railroad Station.

The president’s weekend produced only limited options for new stops that could be added to the driving tour.

On Saturday, he visited Delaware Orthopaedic Specialists for X-rays as a follow-up to a foot injury he sustained in November. On Sunday, with snow falling, he attended Mass with his granddaughter Natalie at St. Joseph on the Brandywine, a church near his home. He is scheduled to return to the White House on Monday.