CHICAGO — Last year, Alex Jones supplied conspiratorial content to the leader of the free world. This month, he was shamed by a nun.

The Infowars impresario and his camera crew had accosted a man escorting three Latino children and their mothers to a Catholic Charities relief center in McAllen, Texas, on the border with Mexico. “We know you’re smuggling these kids!” Mr. Jones yelled. Sister Norma Pimentel, the executive director of Catholic Charities in the Rio Grande Valley, then castigated Mr. Jones in a statement for “interrupting the good will of someone providing assistance in the form of transportation for three mothers and their children.”

For Dan Friesen and Jordan Holmes, the latest contretemps was fodder for something else: Episode No. 547. The former stand-up comedians mock Mr. Jones for a living on their podcast, Knowledge Fight, but with the end of the Trump era, the duo wonder how long his conspiratorial carrying on can remain interesting, much less culturally relevant.

“He just feels less and less in control of what he’s doing,” Mr. Friesen said. “The presentation is reckless and absurd.”

Never one for strict coherence, Mr. Jones seems to be reaching for new levels of incoherence, Mr. Friesen added, “so reactive, so self-contradictory, day to day.”

And that poses a challenge for podcasters trying to find deeper meaning to the rantings of perhaps the most important conspiracy theorist of the past decade.

Mr. Jones and Infowars did not respond to requests for an interview or comments for this article.

Mr. Friesen began Knowledge Fight in January 2017, at the start of Mr. Jones’s on-air love affair with President Donald J. Trump. The budding podcaster sold his plasma to help keep it afloat, but it grew during the Trump administration into a profitable enterprise. It now boasts more than 2,700 patrons on Patreon, a subscription-based funding site. Mr. Friesen declined to quantify his total listenership.

Knowledge Fight’s focus has shifted this post-Trump year to chronicling the ragged downward spiral of Mr. Jones, a conspiracist who has lost the plot.

“He is worth exploring in terms of better understanding the right wing, and how did we get here from there? How did we disrespect information and the conveying of information so much that we ended up where we are in 2021?” Mr. Friesen asked.

The removal of Mr. Jones from social media platforms like Twitter and YouTube has limited the availability of his archive. But through back-channel research, Mr. Friesen had captured and saved years’ worth of shows, allowing him to trace Mr. Jones’s career.

The podcast still broadcasts from a spare bedroom off the kitchen in Mr. Friesen’s rumpled apartment on Chicago’s North Side, the hosts’ verbal explosions sending Mr. Friesen’s cat, Celine, streaking for cover. The studio is festooned with gifts from fans, including a toy “raptor princess,” the show’s unofficial dinosaur mascot, a Lego bonsai tree and a tub of laundry detergent pods that a listener sent Mr. Friesen accidentally in an Amazon address mix up.

The scene evokes Mr. Jones’s own scrappy start in the late 1990s, when he broadcast from a nursery in his Texas house. 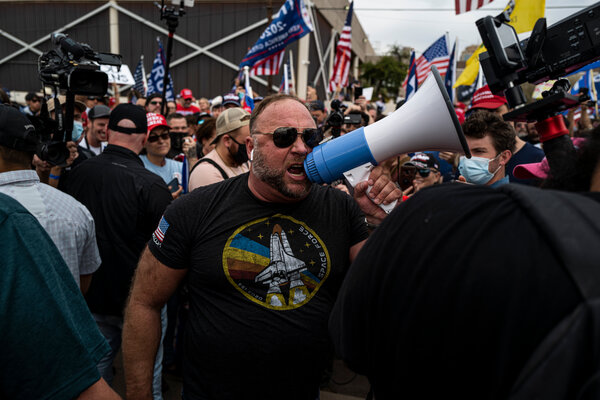 Mr. Jones was influenced by the John Birch Society and right-wing Cold Warriors, but conspiracy broadcasters of decades past were “boring men in public access TV studios dissecting the all-seeing eye on the back of a dollar bill,” said Jon Ronson, a journalist and filmmaker who has known Mr. Jones for more than two decades. “People were yearning for somebody who would be funny.”

In a world where truth was malleable and entertainment a premium, he said, “Alex was a star.”

“But it got darker. The money and the power got to him,” Mr. Ronson added. Infowars thrived on stoking hatred of Muslims, spinning conspiracy theories about staged mass shootings, promulgating lies about Democrats trafficking children and, lately, sowing anti-vaccination fabrications.

Mr. Friesen and Mr. Holmes decided to counter Mr. Jones’s version of entertainment with their own. The two men met through Marty DeRosa, a Chicago comedian. Mr. Holmes, 33, grew up in the small Northern Illinois town of Princeton. His parents were members of the No-Name Fellowship, a religious cult. The cult disbanded after the child of one of its members died after being denied medical treatment.

At the University of Missouri, Mr. Friesen, 36, got interested in American storytelling, including the conspiratorial stories Americans tell themselves.

He listened to Mr. Jones occasionally “from the 9/11 days,” when the Infowars host claimed to have predicted the attacks, Mr. Friesen said. “Then, once I saw him getting involved in Trump, it felt weird,” Mr. Friesen said.

For Infowars, a return to obscurity might be looming. After a dizzying audience surge during Mr. Jones’s live broadcast of the Capitol riot on Jan. 6, daily traffic to the Infowars website has plummeted, to about one-quarter of that day’s views and well below where it was in recent years, according to an analysis by SimilarWeb, an internet tracking company.

Traffic from social media has never fully recovered from Mr. Jones’s removal from most big platforms in 2018 and 2019, for violating policies against abusive behavior, and posts promoting violence or hate. Websites like Infowars can attract casual readers chasing viral posts on social media. But those referrals have decreased significantly, with less than 1 percent of all traffic to Infowars coming from social media, according to the SimilarWeb analysis.

The major exception to this trend has been Facebook, from which Infowars gets more than half of its remaining social media traffic, even though Mr. Jones is technically banned, according to Ilana Marks, an analyst and marketing manager at SimilarWeb.

Mark Zuckerberg, Facebook’s founder and chief executive, weakened the ban by allowing Facebook users other than Mr. Jones and his company to continue to share Infowars content, a fact reported earlier by BuzzFeed News.

Infowars has undergone firings and internal ruptures. Mr. Jones’s fringe appeal has been partly eclipsed by the QAnon conspiracy movement, which he has condemned. Having spent weeks urging “patriots” to the ramparts in Washington on Jan. 6, Mr. Jones has since labored to distance himself from the riot, which resulted in the arrests of some Infowars associates, including a cameraman last week.

For three years, Mr. Jones has had to employ a multistate team of lawyers, battling a half-dozen defamation lawsuits, including four related to his spreading of conspiracy theories around the 2012 Sandy Hook Elementary School shooting in Newtown, Conn. This month, the Supreme Court rejected without comment Mr. Jones’s appeal of a court sanction in one of those cases.

“We used to talk about his outbursts at the very beginning as being so fake, just like: ‘This is performative outrage. You’re yelling because you’re playing that character of Alex Jones, who’s supposed to be yelling,’” Mr. Holmes said. “And now whenever you listen to him freak out, you’re like: ‘This guy’s freaking out. This is somebody who is not in control.’”

With proliferating fringe-right commentators and even Fox News’s Tucker Carlson threatening his conspiracy turf, Mr. Jones has increasingly segued to end-times themes on his show, starring the devil. He’s also been talking about quitting his business, in which he deploys conspiratorial themes to push sales of diet supplements, air and water filters, and doomsday prepper merchandise.

“He will talk about how Infowars is going to run out of money, and that’s generally in service of doing sales pitches, but separate from that, I’ve noticed an upswing in instances of him just yelling about not wanting to do this anymore,” Mr. Friesen said.

Part of the problem, Mr. Friesen said, is Mr. Trump’s desultory exit: “The last five years of Alex’s content has been singularly focused around the ability of one strong man to be the change that’s needed in the world.”

But so far, Mr. Friesen conceded, “We haven’t found anything, anybody, who’s as interesting as Alex.”