Home » Politics » Already Distorting the Events of Jan. 6, the G.O.P. Now Aims to Turn Them on Their Head

In the hours and days after the Jan. 6 attack on the Capitol, rattled Republican lawmakers knew exactly who was to blame: Donald J. Trump. Loyal allies began turning on him. Top Republicans vowed to make a full break from his divisive tactics and dishonesties. Some even discussed removing him from office.

By spring, however, after nearly 200 congressional Republicans had voted to clear Mr. Trump during a second impeachment proceeding, the conservative fringes of the party had already begun to rewrite history, describing the Capitol riot as a peaceful protest and comparing the invading mob to a “normal tourist visit,” as one congressman put it.

This past week, amid the emotional testimony of police officers at the first hearing of a House select committee, Republicans completed their journey through the looking-glass, spinning a new counternarrative of that deadly day. No longer content to absolve Mr. Trump, they concocted a version of events in which accused rioters were patriotic political prisoners and Speaker Nancy Pelosi was to blame for the violence.

Their new claims, some voiced from the highest levels of House Republican leadership, amount to a disinformation campaign being promulgated from the steps of the Capitol, aimed at giving cover to their party and intensifying the threats to political accountability.

This rendering of events — together with new evidence that Mr. Trump had counted on allies in Congress to help him use a baseless allegation of corruption to overturn the election — pointed to what some democracy experts see as a dangerous new sign in American politics: Even with Mr. Trump gone from the White House, many Republicans have little intention of abandoning the prevarication that was a hallmark of his presidency.

Rather, as the country struggles with the consequences of Mr. Trump’s assault on the legitimacy of the nation’s elections, leaders of his party — who, unlike the former president, have not lost their political or rhetorical platforms — are signaling their willingness to continue, look past or even expand his assault on the facts for political gain.

The phenomenon is not uniquely American.

“This is happening all over the place — it is so much linked to the democratic backsliding and rising of authoritarian movements,” said Laura Thornton, the director of the Alliance for Securing Democracy at the German Marshall Fund of the United States. “It’s about the same sort of post-truth world. You can just repeat a lie over and over and, because there’s so little trust, people will believe it.”

Behind the Republican embrace of disinformation is a calculus of both ambition and self-preservation. With members of the select committee hinting that they could subpoena Trump aides, allies on Capitol Hill and perhaps Mr. Trump himself, the counterfactual counterattack could pre-emptively undercut an investigation of the riot.

As videos shown during the hearing gave harrowing new reminders of the day’s violence, leading House Republicans claimed that Ms. Pelosi — a target of the mob — had been warned about the violence in advance but failed to prevent it.

From his private club in New Jersey, Mr. Trump suggested that Ms. Pelosi should “investigate herself,” yet again falsely insinuating that antifa and Black Lives Matter — not his followers — caused the destruction on Jan. 6 and that a democratically decided election had been stolen from him.

All the while, in the Senate, Mitch McConnell of Kentucky, the top Republican, who once led his party in condemning both the riot and Mr. Trump’s role in it, made no visible attempt to stop the flood of fabrications, telling reporters he had not watched the hearing and had little new to say about the most violent attack on the Capitol since the War of 1812.

House Republicans’ desire to bury the attack on their own workplace has created a dysfunctional governing atmosphere. Ms. Pelosi has increasingly treated them as a pariah party, unworthy of collaboration or trust, and has expressed deep disdain for Representative Kevin McCarthy, the minority leader, whom she called a “moron” this past week.

Day of Rage: An In-Depth Look at How a Mob Stormed the Capitol

A six-month Times investigation has synchronized and mapped out thousands of videos and police radio communications from the Jan. 6 Capitol riot, providing the most complete picture to date of what happened — and why. 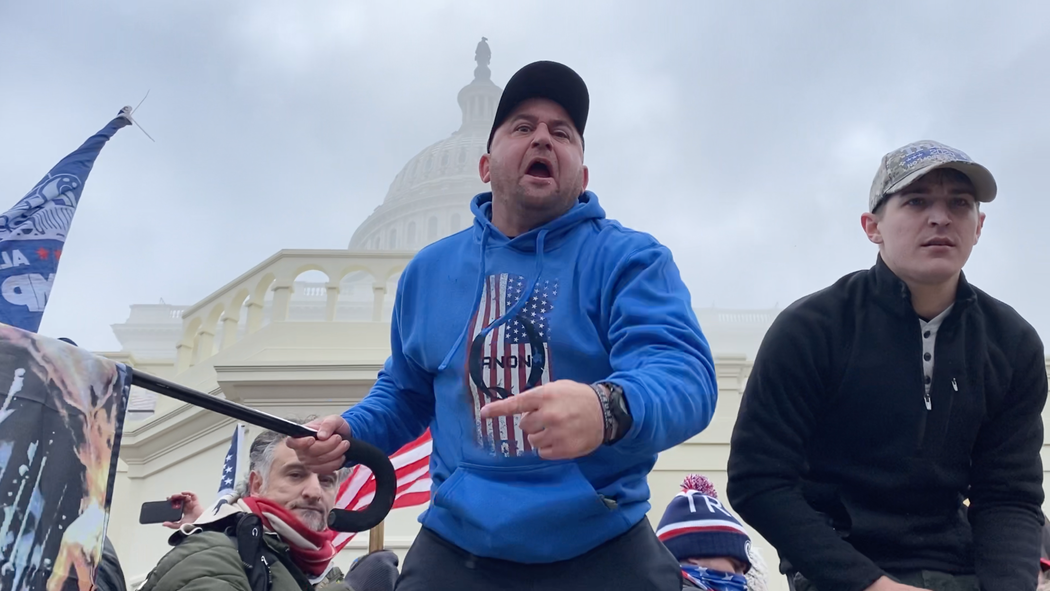 “Anytime you mention his name, you’re not getting an answer from me,” she told reporters. “Don’t waste my time.”

Almost as soon as the police retook control on Jan. 6, hard-core defenders of Mr. Trump in Congress began recasting the gruesome scenes of violence that left five people dead.

Mr. McCarthy, the California Republican, responded differently at first: He angrily demanded that Mr. Trump stop the rioters, according to an account he gave fellow Republicans at the time. A week later, as the House moved to impeach Mr. Trump, Mr. McCarthy said that “the president bears responsibility” for the “attack on Congress by mob rioters” and called for a fact-finding commission.

But in the months since, that early resolve has given way to an out-and-out intent to bury the attack. Mr. McCarthy, who is trying to win back the majority in 2022, moved quickly to patch things up with Mr. Trump, gave latitude to far-right members of his caucus and worked furiously to block the creation of an independent 9/11-style commission.

This past week, just before the officers began to deliver anguished testimony about the brutality they had endured, Mr. McCarthy repeatedly laid blame not with Mr. Trump, the rioters or those who had fueled doubts about the election outcome, but with Ms. Pelosi, one of the invading mob’s chief targets.

“If there is a responsibility for this Capitol, on this side, it rests with the speaker,” Mr. McCarthy said.

Representative Elise Stefanik of New York, the recently selected House conference chairwoman, went even further, saying Ms. Pelosi “bears responsibility” as speaker “for the tragedy that occurred on Jan. 6” and deriding her as “an authoritarian who has broken the people’s house.”

Ms. Pelosi is not responsible for the security of Congress; that job falls to the Capitol Police, a force that the speaker only indirectly influences. Republicans have made no similar attempt to blame Mr. McConnell, who shared control of the Capitol at the time.

Outside the Justice Department, meanwhile, a group of conservative lawmakers gathered to accuse prosecutors of mistreating the more than 500 people accused in the Jan. 6 riot.

Encouraged by Mr. Trump, they also echoed far-right portrayals of Ashli Babbitt, a rioter who was shot trying to break into the House chamber, as a patriotic martyr whose killing by the police was premeditated.

As if to show how anti-democratic episodes are ping-ponging around the globe, President Vladimir V. Putin of Russia in June seized on Ms. Babbitt’s killing — calling it an “assassination” — to deflect questions about his own country’s jailing of political prisoners.

Some senior Republicans insist that warnings of a whitewash are overwrought.

“I don’t think anybody’s going to be successful erasing what happened,” said Senator John Cornyn, Republican of Texas. “Everybody saw it with their own eyes and the nation saw it on television.”

For Mr. Cornyn and other lawmakers, continuing to talk about the attack is clearly an electoral loser at a time when they are trying to retake majorities in Congress and avoid Mr. Trump’s ire.

Most Republican lawmakers instead simply try to say nothing at all, declining even to recount the day’s events, let alone rebuke members of their party for spreading falsehoods or muddying the waters.

Asked how he would describe the riot, in which a hostile crowd demanded the hanging of Vice President Mike Pence, his brother, Representative Greg Pence of Indiana, responded curtly, “I don’t describe it.”

Yet the silence of party stalwarts, including nearly all of the House Republicans who voted to impeach Mr. Trump for his role in the attack and the Republican senators who voted to convict him, has created an information void that hard-right allies of Mr. Trump have readily filled. And they have found receptive audiences in a media environment replete with echo chambers and amplifying algorithms.

In a July poll by CBS News, narrow majorities of Trump voters said they would describe the attack as an example of “patriotism” or “defending freedom.”

That silence follows a familiar pattern: Rather than refute false allegations about a stolen election and rampant voter fraud, many leading Republicans have simply tolerated extremist misinformation.

Perhaps no one’s silence has been more significant than that of Mr. McConnell, who criticized Mr. Trump and his party in the immediate aftermath of the attack, denouncing it as a “failed insurrection” fueled by the former president’s lies.

Since Mr. Trump’s impeachment acquittal by the Senate in February, when Mr. McConnell declared him “practically and morally responsible,” the minority leader has all but refused to discuss Jan. 6.

The quiet acquiescence of party leaders has effectively left Representatives Liz Cheney of Wyoming and Adam Kinzinger of Illinois as the only two Republicans still willing to speak out against a majority of their party.

“Clearly there were security failings at the Capitol, but there was a mob that tried to prevent us from carrying out our constitutional duty,” Ms. Cheney said in an interview. “It’s very hard for me to understand why any member of Congress of either party would want to whitewash that.”

Ms. Cheney has already paid a price: Republicans ousted her this spring from their No. 3 leadership position, replacing her with Ms. Stefanik.

Now, House hard-liners want to expel her and Mr. Kinzinger from the Republican conference altogether, portraying them as “snitches” and “spies” in league with Democrats.

The message is clear: Adherence to facts cannot overcome adherence to the party line.