(Reuters) – As election results trickled in from New York showing he was leading 31-year veteran Democratic Representative Eliot Engel, Jamaal Bowman told supporters he was part of a movement to deconstruct a system that is “literally killing us.” 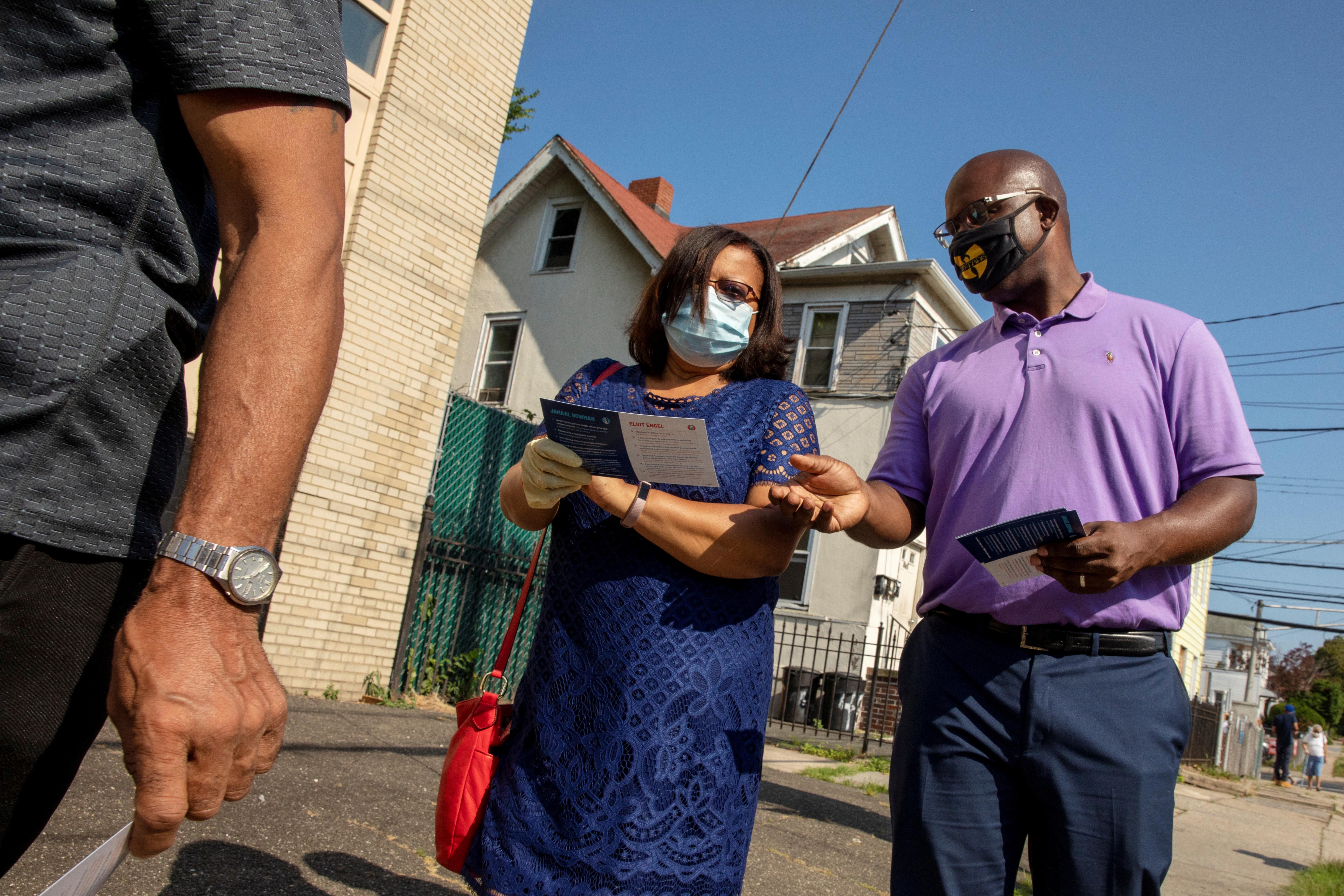 “Eliot Engel…used to say that he was a thorn in the side of (President) Donald Trump,” Bowman, a Black school principal running in his first political campaign, said on Tuesday night. “But you know what Donald Trump is more afraid of than anything else? A Black man with power.”

On Wednesday, Bowman held a commanding 27-point lead over Engel with absentee ballots still pending in Tuesday’s election in the New York district covering the northern Bronx and nearby suburbs.

From New York to Virginia to Kentucky, Tuesday’s elections showed voters are favoring a new generation of minority candidates amid a national reckoning on racism after the death of George Floyd, a Black man, in police custody last month.

“People are tired of the status quo,” said Maurice Mitchell, a Black activist and national director of the liberal Working Families Party. “I think it’s further cemented at a time when all of our systems have failed us.”

Even before Floyd’s death triggered a wave of protests across the country over police mistreatment of African Americans, the number of minority candidates running for the U.S. House of Representatives had increased dramatically in 2020.

In the 22 states that held primaries before Tuesday, 31 percent of House candidates were minorities, up from 22.3 percent in the same states in 2018, according to research by Bernard Fraga, a political science professor at Indiana University. That is the largest uptick from one cycle to the next since at least 2006.

Perhaps more significantly, Fraga said, minority candidates have won or forced runoffs in nearly a third of their contests – the same percentage as the total number of candidates of color, suggesting they are as likely to win as white candidates.

The winners include candidates like Ella Jones, who this month was elected the first Black mayor of Ferguson, Missouri, six years after the police killing of teenager Michael Brown there galvanized the Black Lives Matter movement.

Meanwhile, pressure is mounting on Democratic presidential nominee Joe Biden to select a minority running mate. Biden, a 77-year-old white man, defeated the most diverse slate of candidates in U.S. history to clinch the nomination to face Trump in the Nov. 3 election.

Some Black activists said Republican President Donald Trump’s 2016 victory accelerated the shift. Adrianne Shropshire, the executive director of BlackPAC, a super PAC focused on Black Democrats, noted the historic victories for women of color in 2018; 43 minority women were sworn into the current House, a record.

“Voters are saying they want candidates and elected leaders who can address the issue of structural racism,” Shropshire said.

In Virginia on Tuesday, Cameron Webb, a Black doctor, defeated a raft of fellow Democrats to win the nomination in a competitive Republican-leaning House district.

In Kentucky, Black state lawmaker Charles Booker, until recently an afterthought in the Democratic primary to select an opponent for Republican Senate Majority Leader Mitch McConnell, mounted an unexpectedly robust challenge to Amy McGrath, the former Marine fighter pilot backed by the party leadership. The race was too close to call with absentee ballots pending.

Mondaire Jones and Ritchie Torres, either of whom would be the first openly gay Black member of Congress, appeared likely to prevail over crowded primary fields in two open House seats in heavily Democratic districts in and around New York City.

The 14-term Democratic Representative Carolyn Maloney of New York held a narrow lead over Suraj Patel, a 36-year-old business professor of Indian descent who has questioned whether Maloney, 74, is the right person to address institutional racism.

The increased diversity is not limited to Democrats. The number of Republican House candidates who are members of minorities rose from 12.6% in 2018 to 20% in 2020 in the 22 states that held primary elections before this week, said Fraga, the Indiana University professor.

Many of the contests on Tuesday featured overlapping dynamics beyond race, including generational and ideological clashes.

Bowman and Booker were among those endorsed by liberal stalwarts like Senators Bernie Sanders and Elizabeth Warren over more moderate incumbents, while young candidates like Patel argued their campaigns represented an opportunity for change.

The protests have deepened Black voters’ determination to send a message, according to Cliff Albright, the co-founder of the nonprofit group Black Voters Matter Fund.

He traveled from his home in Atlanta to Kentucky for Booker’s primary, where he saw dozens of voters, many of them Black, chanting “Open the doors!” outside a polling place that closed at 6 p.m. in Louisville.

“I don’t know if I’ve ever seen, at a polling place after it closed, people banging on the doors,” he said.