But historians and Native Americans are also revisiting the legacy of Charles Curtis, whose Kaw Nation ancestry gives him a claim as the first “person of color” to serve as vice president, though the term’s current usage emerged decades later.

Mr. Curtis, who served under President Herbert Hoover from 1929 to 1933, often referred to the novelty of his background while in public office, speaking of his rise “from Kaw tepee to Capitol,” as his Senate biography notes.

Native artifacts adorned his office, he posed for photographs in a Native headdress, and he referred to himself as “one-eighth Kaw Indian and a one-hundred percent Republican,” the biography says.

His embrace of his heritage, however, also came with a legacy that some historians and advocates say undermined Native land rights.

‘One of our own men’

Mr. Curtis was born in 1860 in the territory of Kansas to a white father and a mother of Kanza descent, and spent his early life among the Kanza people, who are now part of the Kaw Nation.

He learned the language and excelled at horsemanship, according to the Senate. And he pursued his early education in Topeka, shuttling back and forth between the city and the reservation, said Crystal Douglas, who runs the Kanza Museum in Kaw City, Okla.

Mr. Curtis was eventually elected a county attorney, and to the Senate and the House of Representatives. Mr. Hoover chose him as a running mate in 1928, possibly because of his popularity in the pastoral Midwest.

Many Native leaders thought a man who grew up with a tribe would look out for their interests. But parts of his legacy, historians say, are overshadowed by his role as the original author of the Curtis Act of 1898, which orchestrated allotment of Native lands and curtailed tribal leadership.

“There is pride with the Kanza, that one of theirs rose to be vice president of the United States,” said Mark Brooks, an administrator for the Kaw Mission in the Kansas State Historical Society. “But I would say that some would pick that apart and refer to the Curtis Act and what it actually did.” 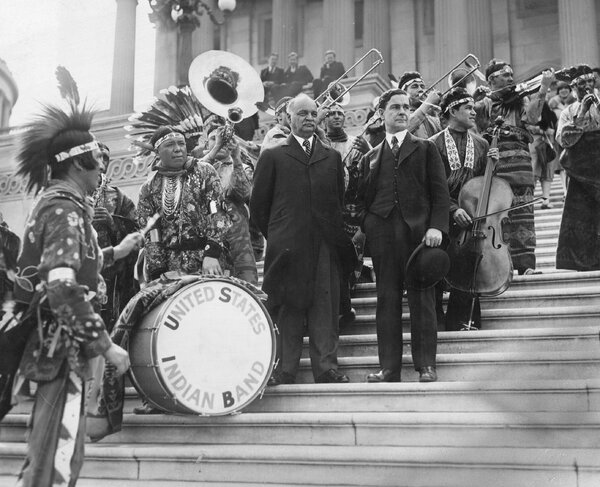 According to original documents provided by the historical society, Mr. Curtis is referred to as “one of our own men” by a tribal leader, Chief Washungah, who spoke at the Capitol in 1900 about the tribe’s share of lands under treaties with the federal government.

“The white people are getting rich off of the lands that have been treated away,” Chief Washungah told Commissioner of Indian Affairs William A. Jones, according to the documents.

He added: “I am getting old and I realize that I cannot live much longer, so I am talking for the children now. I want them to stay on the land, and to get some good land.”

Mr. Jones, in return, told the chief that “your matters have been carefully looked after by your representative in Congress,” in a reference to Mr. Curtis.

Mr. Curtis also had Osage ancestry, according to the Bureau of Indian Affairs.

Ms. Douglas, the Kanza Museum director, said that Mr. Curtis “did some wonderful things” for his people, and introduced bills backing women’s voting rights and child labor laws. She said that Mr. Curtis’s personal papers show he was “disappointed” with how the Curtis Act ultimately harmed tribal identity.

Dr. R. David Edmunds, a retired historian at the University of Texas in Dallas, said that Mr. Curtis represented the 19th-century approach of U.S. policy toward Native people.

“Curtis is the last gasp of the old way, and the country moves away from him,” he said. “He has sort of been forgotten because of that.”

In 1936, when the coffin bearing the body of Mr. Curtis was transported by train from Washington to Kansas, “thousands” were expected to pay respects, according to The New York Times’s coverage of his funeral.

Then he faded into relative obscurity, until this year, as Ms. Harris’s selection on a major party ticket renewed interest in his stature as the highest-ranking person of Native descent in the federal government.

In October, reporting on Ms. Harris’s preparations for a debate, the news site Indian Country Today noted that at least two Native Americans had sought the vice presidency in recent decades.

One was LaDonna Harris, a Comanche citizen, a candidate for the Citizens Party in 1980 with Barry Commoner; the other, Winona LaDuke, of White Earth Nation, was the Green Party nominee for vice president in 1996 and 2000, alongside Ralph Nader.

Laura Harris, LaDonna Harris’s daughter, said in an interview on Monday that she and her mother discovered more about Mr. Curtis while preparing for her campaign.

“You want people to know that we were politically active back in the 1800s, as well as today,” she said. “And we have served in government and were included in government.”

“But he is almost a fluke,” she added. “He did things that, today, we would think they were not very progressive. But that was his time.”

Ms. LaDuke said that while Native women had inspired her run, “I just think it is remarkable that a Native person was elected vice president. And a lot of people didn’t know that.”

Margaret Thatcher’s legacy shines as brightly as her tears