With case counts rising, the president is in a complicated situation. 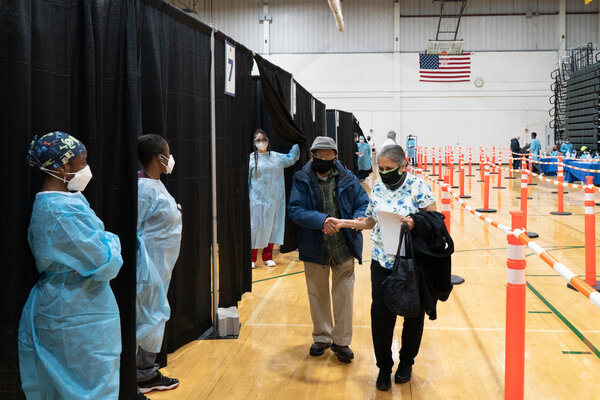 President Biden continues to receive high marks from the public for his handling of the coronavirus outbreak, and Americans are increasingly telling pollsters that they think the worst of the pandemic is behind us. On Thursday, the Consumer Confidence Index, a weekly measure of the public’s economic attitudes, hit its highest level since the start of the pandemic.

And as more vaccines become available, the administration has been beating its own targets on shot distribution.

But the virus is still here — and with case counts rising again in parts of the country, the more aggressive variants of the original Covid-19 strain have grown increasingly prevalent. Mr. Biden is now in a complicated situation: He’s taking a victory lap while pumping the brakes.

“It’s a mixed message,” said Lee Miringoff, the director of polling at Marist College. “There’s an eagerness to pop the champagne cork on one hand, and on the other hand to say, ‘Danger may lurk right around the corner.’ It’s a mixed message, which is hard, and it’s being communicated to a Covid-fatigued country.”

Marist’s most recent poll, for NPR and “PBS NewsHour,” found that just 25 percent of American adults said they wouldn’t get the vaccine when it became available — a lower degree of reluctance than in any prior Marist poll, driven in part by a thawing of opposition among supporters of former President Donald Trump.