Trump administration officials grumble that they laid the groundwork for surging vaccinations, but some hard work in the trenches has helped pick up the pace of production. 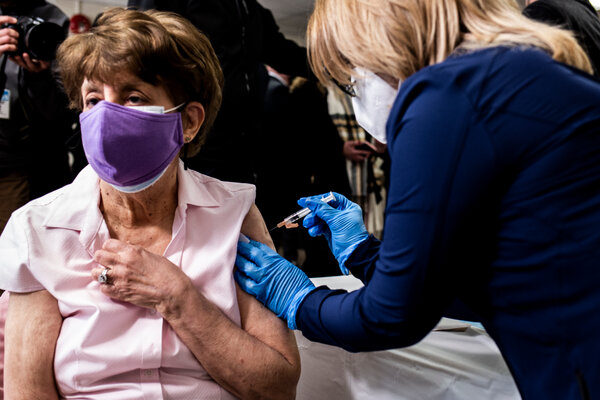 WASHINGTON — When President Biden pledged last week to amass enough vaccine by late May to inoculate every adult in the United States, the pronouncement was greeted as a triumphant acceleration of a vaccination campaign that seemed to be faltering only weeks earlier.

And it is true that production of two of the three federally authorized vaccines has sped up in part because of the demands and directives of the new president’s coronavirus team.

But the announcement was also a triumph of another kind: public relations. Because Mr. Biden had tamped down expectations early, the quicker timetable for vaccine production conjured an image of a White House running on all cylinders and leaving its predecessor’s effort in the dust.

A closer look at the ramp-up announced last week offers a more mixed picture, one in which the new administration expanded and bulked up a vaccine production effort whose key elements were in place when Mr. Biden took over for President Donald J. Trump. Both administrations deserve credit, although neither wants to grant much to the other.

The Biden administration has taken two major steps that helped hasten vaccine production in the near term. Even before Mr. Biden was inaugurated, his aides determined that by invoking the Korean War-era Defense Production Act, the federal government could help Pfizer obtain the heavy machinery it needed to expand its plant in Kalamazoo, Mich. The Trump administration had repeatedly invoked that law, but its order for Pfizer only covered single-use supplies like plastic liners, not durable factory equipment.

Crucially, Mr. Biden’s top aides drove another vaccine manufacturer, Johnson & Johnson, to force a key subcontractor into round-the-clock operations so its vaccine could be bottled faster. That company had fallen behind on the production targets laid out in its federal contract. Only after Jeffrey D. Zients, the White House’s chief pandemic adviser, and Dr. David Kessler, who oversees the vaccine effort, demanded the company commit more resources did it publicly pledge to meet a crucial deadline in May.