Home » Politics » Biden says ditching the filibuster would throw Congress ‘into chaos’ and lead to gridlock. 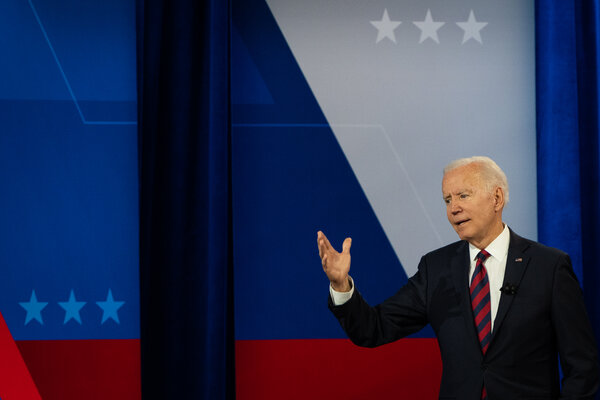 President Biden on Wednesday night defended the filibuster, a procedural tactic that stands to hold up much of his agenda in the Senate, even as he reiterated that he viewed it as a relic of Jim Crow.

“There’s no reason to protect it other than you’re going to throw the entire Congress into chaos and nothing will get done,” he said at a CNN Town Hall in Cincinnati. “Nothing at all will get done.”

Mr. Biden said there was too much at stake to risk that level of “chaos” that a fight over the filibuster would ignite, including voting rights legislation he still wants to see passed. He also said waging a war against the filibuster would play into the hands of Republicans seeking to hold up his agenda. “Wouldn’t my friends on the other side love to have a debate about the filibuster instead of passing the Recovery Act?” he said.

At his first news conference as president last March, Mr. Biden thrilled progressives who want to change the rules governing the Senate’s signature procedural weapon that require a 60-vote supermajority to advance a bill. Mr. Biden said the filibuster was “being abused in a gigantic way.”

That month, he also endorsed a return to what is called the talking filibuster: the requirement that opponents of legislation be required to occupy the floor and make their case against it.

On Wednesday night, he reiterated his support for a return to the old form but made it clear that he thought a filibuster fight was only a distraction.

“I’ve been saying for a long, long time the abuse of the filibuster is pretty overwhelming,” he said.

But when it came to passing voting rights legislation, he added, “I want to make sure we bring along not just all the Democrats, we bring along Republicans who I know know better. They know better than this. What I don’t want to do is get wrapped up right now in the argument whether or not this is all about the filibuster.”

Mr. Biden rejected the idea that overturning or changing the filibuster was the only way he would pass his agenda through a divided Congress.

What planet are you?! Sunak shouts down audience member in Manchester hustings