Several Black Democrats are running competitively in conservative states, and they are doing so by talking explicitly about race. 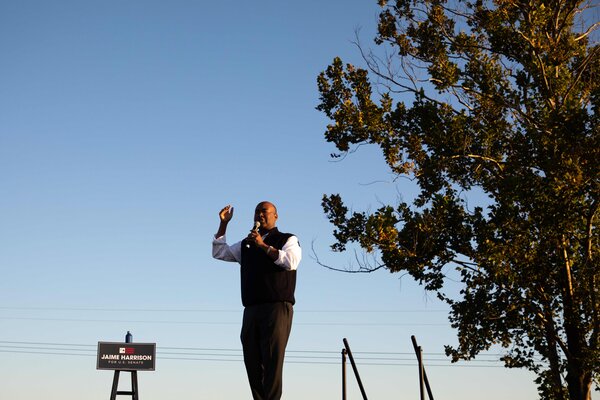 By Jonathan Martin and Alexander Burns

HORN LAKE, Miss. — Mike Espy and Jaime Harrison, two of the five Black Senate candidates in the South this year, may belong to different political generations, but they both came up in a Democratic Party where African-American politicians didn’t talk directly about race in campaigns against white opponents.

But there was Mr. Harrison this month, speaking before more than 250 cars at a drive-in rally in South Carolina’s Lowcountry, explicitly urging a mix of white and Black supporters to right the wrongs of the state’s past.“The very first state to secede from the union,” Mr. Harrison said to a cacophony of blaring horns, “because we will be the very first state in this great country of ours that has two African-American senators serving at the very same time — and you will make that happen.”

“She is someone who believes in going back to the old days,” he said, lashing his Republican rival for hailing the Civil War-era South and refusing to take a stand in the debate over Mississippi’s state flag, which until this summer included the Confederate battle emblem. “We need a Mississippi that’s more inclusive, that’s more diverse, more welcoming.”

While it has been overshadowed by the presidential race, a political shift is underway in the South that could have a lasting impact well past this election. Democrats have nominated several Black Senate candidates in a region where they’ve often preferred to elevate moderate whites, these contenders are running competitively in conservative states, and they’re doing so by talking explicitly about race.

Mr. Harrison, a onetime lobbyist and state party chair; Mr. Espy, the former agriculture secretary; and the Rev. Dr. Raphael Warnock, the pastor of the storied Ebenezer Baptist Church and a Democratic Senate candidate in Georgia, are each making Republicans nervous about seats that have not been competitive in decades. In Tennessee and Louisiana, where Mayor Adrian Perkins of Shreveport entered late in the race, Black Democratic Senate candidates have also emerged.

With two Black Republicans vying for seats, in Michigan and Rhode Island, there are a record seven major-party Black candidates running for the Senate this year.

It’s a remarkable roster in a part of the country that has both the highest concentration of African-American voters and a history of hostility to Black candidates running statewide — a resistance so strong that national Democrats for decades treated Black recruits as an afterthought at best.

While Black lawmakers have won House seats in majority-minority districts for decades across the region, they have a harder time capturing contested nominations and then winning white voters statewide. Of the six Black senators elected since Reconstruction, only one has come from the South: Senator Tim Scott of South Carolina, a Republican, who was initially appointed to fill a vacancy. In the same period, just one Black governor has been elected in the South.

In the most promising Southern races, Democrats have largely supported white candidates, including this year in North Carolina, where the party recruited Cal Cunningham, a moderate former state legislator and military veteran, to challenge Senator Thom Tillis, a vulnerable Republican.