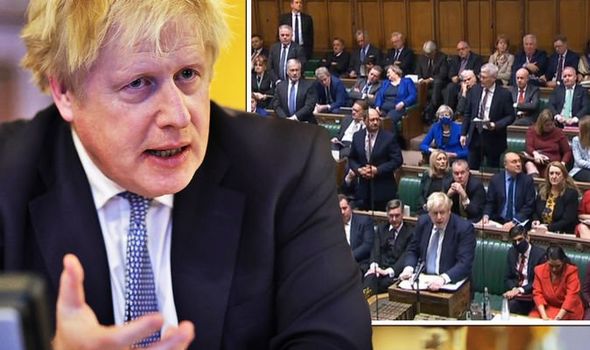 The deal involves him clearing out his Downing Street staff, ditching “lefty policies” and refocusing on traditional Conservative ones including tax cuts and streamlining government.

The Prime Minister has made it clear that he wants to complete the unfinished work of Margaret Thatcher and Tony Blair in modernising the government and making it leaner.

It is also understood that he is considering preparing a major speech in the next fortnight to lay out his new post-pandemic vision.

The three points agreed between the Prime Minister and Tory backbenchers include a clearout of staff from Downing Street and listening “to the right people” who will be brought in as replacements.

This began last week with five key members of staff resigning including director of communications Jack Doyle, chief of staff Dan Rosenfield and principal private secretary Martin Reynolds, all three of whom “jumped before they were pushed” according to one insider.

“There are more to come,” the Prime Minister is understood to have told allies with speculation over advisers Henry Newman and Josh Grimstone, who are close friends of his wife Carrie, among others.

In come new faces including former BBC journalist Guto Harri who was his director of communications as London Mayor.

The new Chief of Staff will be Chancellor of the Duchy of Lancaster Steve Barclay who also runs the Cabinet Office as part of a move to streamline Government and “make the centre clearer.”

Secondly, he has reassured them that he is “a sound Conservative at heart” who is “in tune with the values of the wider electorate” and has been “diverted off course by the wrong kind of advisers”.

Finally, he has agreed to replace “lefty” policies, including prioritising a green agenda and ‘nanny state’ rules, with ones which will promote a “stronger union of the United Kingdom, the economic recovery post-pandemic, and making people richer”.

According to an insider these are the policies “the Prime Minister wants to fight the next election.”

Among those advising him is Australian election guru Sir Lynton Crosby who is understood to be leading a refresh of Downing Street and Government policy.

One source close to the Prime Minister said that he “is in a bullish mood” and “doesn’t feel like he is about to be toppled”.

“He does want to be more Conservative and bring in radical reform of the Government.

“He knows that Margaret Thatcher and Tony Blair both wanted to complete this slimming down of Government and create a clearer centre of operations but ran out of time.”

The source added: “The Prime Minister is also clear that he is serious about the Levelling Up agenda. He knows some people mock it but he thinks it is important to spread wealth and opportunity and deliver for the voters in the former Labour Red Wall seats.

“In the end though it is going to be policies, as he puts it, ‘to warm the cockles of Tory hearts’ with low tax and supporting enterprise”

One insider told the Sunday Express: “The facetime the boss has spent with backbenchers this week has shown him, clearly, that the nanny state approach doesn’t have the support of his MPs.

“Equally, prioritising the so-called, ‘green agenda’ items is not helpful – the PM has been forced to understand this.

“It therefore follows that, as hard as it is, the people responsible for this travel of direction will have to leave.

“The PM gets that, for the good of the country, he needs to be decisive and act. He will not be able to deflect this – personnel change is inevitable.”

The insider went on: “In their place will need to be serious people, in tune with MPs, and the people who elected him in historic numbers in 2019.

“He has a limited time to achieve this. The time for words is finished – if the PM wants to remain in the job, he must become the PM we all expected him to be.”

Tory MPs who want Boris Johnson to stay as prime minister hope he will become a Ronald Reagan figure, using his campaigning prowess to take forward Conservative policies while backed up by a top team to ensure the Government delivers on its ambitions.

The lack of an obvious successor has strengthened support for Mr Johnson on the right of the party, and bolstered expectations that he will not be forced out by “partygate”.

An MP said: “He can ride it out so long as he hasn’t lied to the House.”

A fervent supporter of the PM described an attempt to put new momentum into a stalled attempt to get rid of the Prime Minister as “like trying to jump-start a locomotive with a Mini”.

One MP who had concerns about Mr Johnson’s attitude to the economy described how they were torn, saying: “I don’t want to give succor to those who want revenge for Brexit but then again he was never a Tory – he’s a spendthrift.”

A leading eurosceptic said that Mr Johnson’s chances of survival would be boosted if he made it clear he would legislate to get rid of the Northern Ireland protocol, and argued he should be ready to threaten the House of Lords with abolition if it stands in his way. They insisted that Brexit is “incomplete” while the protocol is left in place.

Mr Johnson has by no means won over all Conservative parliamentarians, despite last week’s meeting with MPs being described as having the atmosphere of a “Boris rally”.

A senior Conservative cautioned: “It isn’t over. There’s more to come.”

Former minister Nick Gibb, previously an ultraloyalist, has also called for him to go.

He said his constituents were “furious about the double standards” and that “to restore trust, we need to change the prime minister”.

But Labour are believed to be changing tactics on Mr Johnson amid private polling and focus groups showing that the Prime Minister is “toxic” and the only leader Sir Keir Starmer could beat currently.

One Labour MP said: “Over the last few days the calls for Boris to go have been toned down because it’s in our interest to spread the poison across the whole Tory Party.”

A shadow cabinet member said: “There is no doubt from the private polling and focus group work we have been doing since the summer that Boris is now toxic with voters.”