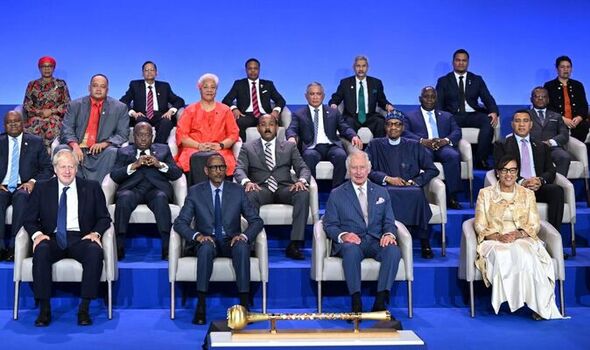 The day before the meeting at a Commonwealth summit in the Rwandan capital Mr Johnson urged the Prince to keep an “open mind” about the asylum plan. He said he was ready to defend his policy after Charles was reported to have privately criticised it as “appalling.”

But Mr Johnson appeared to step back from confrontation as described an upbeat 15-minute meeting between the two.

“You wouldn’t expect that.”

He added: “It was a good old chinwag and we certainly covered a lot of ground and there’s no doubt that when you look at, what you can certainly take away from what the prince said today in his opening address to the summit, is that everyone can see the huge, huge progress that Rwanda has made.”

Clarence House is understood to have been unhappy that public debate over Charles’s remarks about Britain’s policy of removing asylum seekers to Rwanda had overshadowed his well-received trip to the East African nation.

His remarks to ITV in Kigali on Thursday are believed to have been the final straw.

“I am delighted that Prince Charles and everybody is here today to see a country that has undergone a complete, or a very substantial transformation,” he said.

It was revealed earlier this month that Charles had been overheard describing the Rwanda scheme as “appalling.”

Last week Mr Johnson dismissed criticism of the policy from “slightly unexpected quarters” in an apparent dig at the prince and Church of England bishops, who attacked it as “immoral.”

The three topics on the agenda for the PM’s meeting with Charles were sustainability, youth, and the history and values of the Commonwealth and Charles’s passion for it.

Mr Johnson praised the migrant scheme during the press conference.

“I’m confident that we will be able to go ahead and develop a solution that I think who’s time has come.”

“If you look at the problems that the world faces with illegal migration you can see that other countries are trying this.”

“I’m confident that it will produce value for money.”