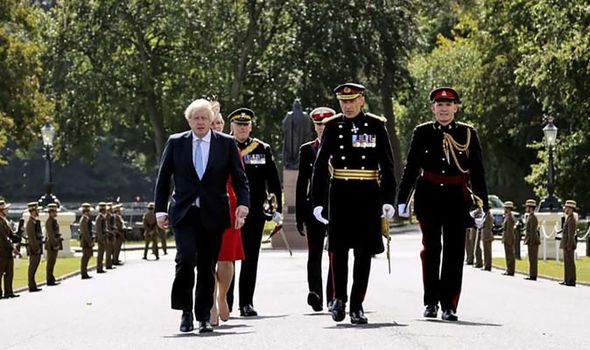 The PM attended the Sovereign’s Parade at the Royal Military Academy as the Queen’s representative to watch 243 cadets commissioned as Army officers. Mr Johnson acknowledged the Army’s role constructing Covid vaccine centres while paying tribute to the training received at the academy.

He said: “To those of you who will help to lead the British Army, thank you for what you are going to do to uphold the values of this country: freedom, democracy, human rights, the rule of law, bravery. Persevering in some of the most difficult and dangerous places in the world, and in this country too, when there are flood defences to be dug, hospitals to be built and patients to be airlifted from remote Hebridean islands.

“When there are vaccine centres to be constructed with lightning speed, and thousands upon thousands of lives to be saved here in the UK, we know that we can rely on the men and women of the British Army and the leadership that has been acquired here at Sandhurst.”

The Prime Minister also acknowledged the exacting nature of the Sandhurst course and thanked the cadets for persevering.

After describing and joking about some of the challenges the cadets may have faced, he said “you can be forgiven for a tiny second if you have said to yourself, quietly, ‘stuff this for a lark or a game of soldiers'”.

Mr Johnson also spoke of empire, history and Forces’ future role, saying: “After 220 years in which British Armed forces have found themselves engaged for good or ill in about 163 of the 193 countries in the UN, and we have acquired unbundled an empire seven times bigger than Roman Empire at height, we in this country are wise enough and humble enough to understand that the aim of our amazing Armed Forces should never again be conquest, and the purpose of all our military professionalism should never be war, but peace and friendship.”

Fawning over Boris! Furious Tory councillor resigns after Fabricants support of No10