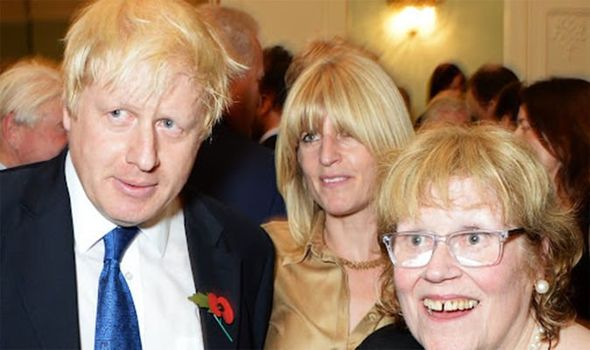 Charlotte Johnson Wahl, born in May 1942, died “suddenly and peacefully” at a London hospital on Monday, the family said. She is survived by her five children Leo Johnson, Boris Johnson, Jo Johnson, Baron Johnson of Marylebone and Rachel Johnson.

Mrs Johnson Wahl was the daughter of barrister Sir James Fawcett, who was president of the European Commission for Human Rights in the 1970s.

She studied English at Oxford University, but interrupted her education to travel to America with Stanley Johnson.

The couple married in 1963, before Mrs Johnson Wahl returned to complete her degree as the first married female undergraduate at her college.

She and Stanley had four children: Boris, journalist Rachel, former Cabinet minister Jo and environmentalist Leo, before they divorced in 1979.

After the divorce, Mrs Johnson Wahl suffered a mental breakdown and was admitted to the Maudsley psychiatric hospital where she stayed for nine months.

She used her time there to paint 78 pictures which catalogued her state of mind.

She married the American professor Nicholas Wahl in 1988, moved to New York and began painting cityscapes.

She was was widowed in 1996 and moved back to London.

At the age of 40, she had been diagnosed with Parkinson’s disease, but continued to paint.

The Prime Minister once described his mother as the “supreme authority” in his family and has credited her with instilling in him the equal value of every human life.

In 2019, at his first Conservative Party Conference as Prime Minister, Mr Johnson told delegates they were entitled to ask about his core principles and ideals, saying his mother had taught him to believe in “the equal importance, the equal dignity, the equal worth of every human being on the planet”.

He also disclosed in the same speech that his mother had voted Leave in the EU Referendum.

Kicking out bad neighbours is too difficult, Conservative MP says

Corbyn vs Corbyn: Jeremy heckled by own brother Piers as row explodes in Brighton

5 things Keir Starmer MUST do to secure Labour