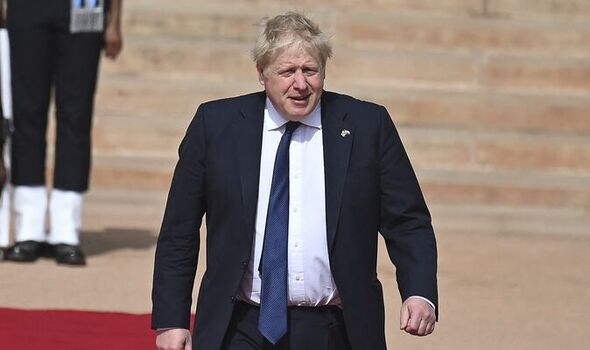 The Prime Minister threatened to “privatise the a*** off” the Passport Office and DVLA unless they start delivering better services. And he lashed out at the “post-Covid manana culture” at some government agencies as he urged his Cabinet to find efficiencies that can help ease the cost-of-living crisis. The swipe at lingering pandemic practices such as working from home came amid fury at long delays in receiving new passports.

Families have been left with agonising waits with the Passport Office repeatedly breaching a new 10-week target for processing applications.

Thousands of holidaymakers have been left with no choice but to pay £150 to fast-track their passport applications in time for the summer break.

There has been an unprecedented surge in demand after the lifting of Covid restrictions, because 5 million people delayed renewing their passports during the pandemic.

Post-Brexit travel rules from the European Union have complicated matters further as they require travelling Britons to have at least three months validity remaining when travelling to EU member nations.

Mr Johnson is said to be “horrified” by the scale of the groaning backlog and vowed to haul in bosses next week to get them to sort out the mess.

During a cabinet meeting, the PM is understood to have told ministers the high cost of services was affecting families ahead of the summer holidays.

A senior government source said Mr Johnson had used the phrase “privatise the arse” at the cabinet meeting, as a threat if the backlogs cannot be cleared.

He even mooted putting the Passport Office on the market if it does not up its game and offer better value for money.

The Passport Office – which reports directly to the Home Office – has seven regional offices around the UK, in London, Glasgow, Belfast, Peterborough, Liverpool, Newport and Durham. It employs around 3,000 people.

The PM’s official spokesman said: “This is a serious issue facing families and one that needs to be gripped.

“That’s his focus and he’s ensuring that those responsible will be able to make sure they’re doing everything possible to clear this backlog and help hardworking families get to get their passports and get on holiday.”

He said: “Normally the Passport Office is very slick in processing passports. It’s really disappointing to hear (about delays).

“If it’s not resolved, it is going to mean that people can’t get away.”

Airline chiefs are already bracing Britons for a summer of travel chaos because of a lack of border staff to conduct checks.

Meanwhile, the DVLA has been condemned for being slow issuing licences, with ministers partly blaming refusal to return to offices.

It comes as the civil service is resisting attempts by ministers to force them to ditch working from home and return to Whitehall.

London ministries are said to be less than half-full despite the efforts of Jacob Rees-Mogg to pry them from their spare rooms and kitchen tables.

Mr Rees-Mogg’s attempts to end WFH, including leaving notes on empty desks, have not been backed by other ministers, with Culture Secretary Nadine Dorries accusing him of a ‘Dickensian’ approach to the issue.

The Cabinet is also said to have backed away from the idea of stripping London weighting from the salaries of people who are still not yet commuting back into the capital.

Dave Penman, the secretary general of the Civil service’s FDA union, said: “Hybrid working can save taxpayers millions by reducing the government estate and the pandemic showed that effective public services can be delivered regardless of where staff are placed.’

Mr Rees-Mogg has written to Cabinet ministers calling on them to issue a clear message to staff about a “rapid return to the office” and has been leaving notes in empty Whitehall workspaces with the message: “I look forward to seeing you in the office very soon.”

“What the minister is seeking to achieve is to do everything possible to get the civil service to return to the pre-pandemic level,” the Prime Minister’s official spokesman said.

“That is what he is seeking to do. That is supported by the Cabinet Secretary and obviously the Prime Minister.”

Last week Mr Rees-Mogg voiced frustration with the DVLA, saying: “I am still constantly writing to DVLA on behalf of my constituents to get them driving licences and we know that the DVLA was simply not working properly with people working from home. That’s very unfair on my constituents.”