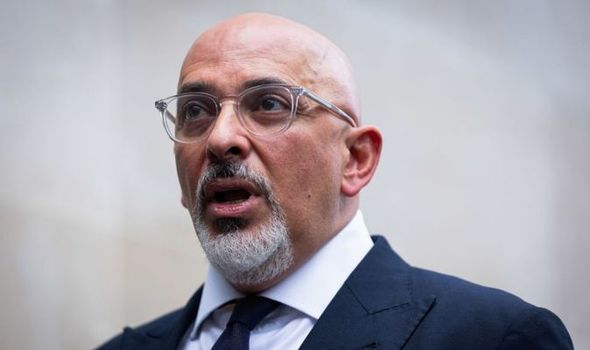 Nadhim Zahawi yesterday rejected claims the Prime Minister is in danger of being forced out of Downing Street in the row over partying. He also dismissed reports of Mr Johnson’s allies launching a policy blitz called Operation Big Dog to deflect attention away from the No 10 scandal.

Mr Zahawi said: “I don’t recognise that at all. Government doesn’t work like that.”

But the scale of discontent in the Tory ranks was underlined by a serving Cabinet minister and an influential former minister yesterday.

The Prime Minister’s leadership was openly questioned by Science Minister George Freeman, who said he was “shocked and flabbergasted” by the revelations of boozy partying.

He said they caused “serious damage” to public trust in Government and he questioned why some No 10 staff were holding parties when the public “couldn’t see dying loved ones”.

In a letter to a constituent, he pointed the finger of blame at the PM and his senior aides, saying people in positions of power “shouldn’t seek to escape public responsibility or accountability”.

He added: “The Prime Minister and his office should set the highest standards.”

Former Brexit Minister Steve Baker said his constituents were “about 60 to one against the Prime Minister”, after he spent the weekend back in Wycombe, Bucks, a Conservative heartland.

The powerful backbencher said “there must be one rule for all” but added that he would wait for the report of civil servant Sue Gray before taking any action.

Mr Zahawi had defended Mr Johnson during a round of morning interviews after six Tory MPs publicly called for a new leader.

Asked three times in a BBC interview if the PM will stay in his position, Mr Zahawi said: “Yes. Because he’s human and we make mistakes.” He insisted Mr Johnson was “focused on the big issues”.

Downing Street yesterday refused to confirm reports that the PM had been interviewed by Ms Gray as part of her probe.

The spokesman also refused to set out a timetable for publishing her report, adding: “It depends when the report is concluded and when it’s available.”

He did confirm Mr Johnson commuted between Chequers and No 10 during March 2020 while his now-wife Carrie was pregnant.

Guidance at the time was that people should not travel for non-essential reasons. But the spokesman said: “Mrs Johnson had been placed in a vulnerable category and advised to minimise social contacts.

“In line with clinical guidance and to minimise the risk they were based at Chequers, with the Prime Minister commuting.”

There was better news for the Prime Minister from an opinion poll of Conservatives last night.

Almost two-thirds of Tory members quizzed backed him to stay as the party leader. A quarter wanted to see him go.

Some 52 per cent of the 704 asked by Opinium thought Mr Johnson remained on course to win the next general election.

But less than half – 46 per cent – believed he was telling the truth about parties in Downing Street.

And 29 per cent did not trust his account of what happened.