Mr Johnson insisted the covid jab programme delivered by the NHS with Mr Hancock at the top is “absolutely outstanding”. He said: “I have complete confidence in Matt and all of the government who have been dealing with Covid throughout the pandemic. “And I think that when you look at the vaccine rollout that has been delivered by the NHS it is absolutely outstanding.

“And I would just remind you that today, under the leadership of Matt and the NHS, we’ve now done 80 per cent of adults in this country have had a first jab and we’re now asking 18-year-olds to come forward.

“So we’re making huge, huge progress and that’s down to the work of the NHS with Matt at the top of it.”

The ousted aide launched another anti-government tirade yesterday, accusing Mr Johnson of being a “gaffe machine”. 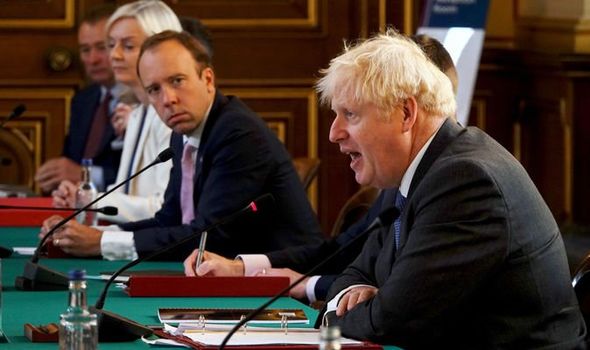 Mr Cummings claimed that Tory officials did not put Mr Johnson up for an interview with broadcaster Andrew Neil during the 2019 general election because he was “clueless” on policy.

Opponents accused the PM of “running scared” from scrutiny by avoiding in-depth questioning from the veteran broadcaster, even though rival leaders had taken part.

Mr Cummings said it was “not a hard decision” because why would they “put a gaffe machine clueless about policy & government up to be grilled for ages”.

Asked about the ex-aide’s latest remarks, a Downing Street spokesman said:“Of course that is not a characterisation that we would accept.