Home » Politics » Boris rubs EU’s nose in it: Novavax jabs to be made in Britain after Brussels snubbed 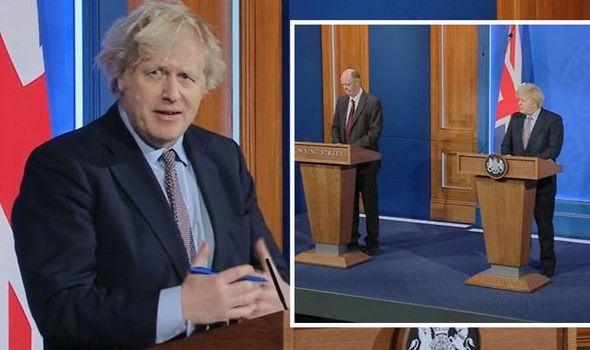 The Prime Minister confirmed an agreement with British drugmaker GlaxoSmithKline (GSK) would see doses of the coronavirus vaccine manufactured in the north east of England.

GSK will provide “fill and finish” manufacturing capacity beginning as early as May.

The “fill and finish” is the completion stage of vaccine manufacturing, preparing vials of the final vaccine and packaging them for distribution and use.

The protein antigen component of NVX-CoV2373, which helps defeat the virus, is also produced in the North East of England by Novavax’s manufacturing partner, FUJIFILM Diosynth Biotechnologies, at their site in Billingham, Stockton-on-Tees.

Britain secured a deal for 60 million doses of the life-saving injection last year but it is yet to be approved by the regulator for use.

The announcement on the jabs comes amid weeks of threats from the EU to ban the export of vaccines from the continent until bloc’s slow inoculation programme had caught up with the pace of the UK’s immunisation drive.

However, it also comes just days after Novavax delayed talks on signing an agreement to supply doses to Brussels.

At a televised coronavirus briefing this evening, the Prime Minister said: “At the same time as we push forwards with our programme to offer a vaccination to all adults by the end of July we’re building up our own long-term UK manufacturing capabilities.

“I’ve already told you that Novavax – a potentially significant new weapon in our armoury against Covid – is going to be made at Fujifilm in the North East.

“And I can today announce that the Vaccine Task Force has reached an agreement with GlaxoSmithKline to finish and bottle this precious fluid also in the North East giving us between 50 and 60 million doses of UK made vaccine subject to the right approvals from the MHRA.”

The time of the announcement – just days after delays to the EU’s contract with Novavax became public – is likely to rub salt in the wounds of Brussels, which is struggling to ramp up its own immunisation efforts.

While more than 57 percent of adults in the UK have had a first dose of a Covid jab, the number is much closer to 10 percent across the EU.

Novavax is said to be wary of putting pen to paper following the threats made by the EU to AstraZeneca following issues with the manufacturing of the Oxford jab.

“You can’t blame the company for being cautious after seeing the punishment beating given to AstraZeneca over the past few weeks,” a source told The Sun last week.

“They are clearly unwilling to line themselves up as the new scapegoats for the EU’s failings.

“There are many more countries who want to do business.”

According to results of phase three trial in the UK, the jab offers 100 percent protection against severe disease, including all hospital admission and death.