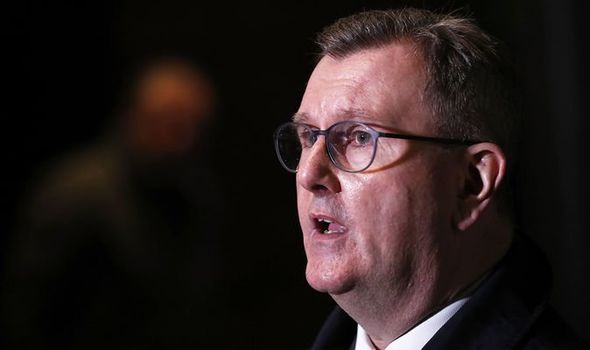 The Protocol is the mechanism agreed by the UK and the EU aimed at preventing a hard border on the island of Ireland – but critics say it has instead resulted in a border down the Irish Sea.

The situation took a further twist last week when Paul Givan quit as Northern Ireland’s First Minister, claiming he and fellow Unionists were expected “to be seen and not heard” when it came to the controversial arrangements.

He told Express.co.uk: “If we had a Prime Minister committed to the Union of the United Kingdom, he would not have signed the Protocol.

“And, if through some monumental error he did so, he would have immediately undone his error.”

It had fallen to “pro-unionists” to put pressure on the Prime Minister, Mr Habib argued, with the rally scheduled for Dromore Orange Hall.

He said: “We self-evidently do not have a Prime Minister committed to the Union.”

“That is why I am getting on a plane to fly to Belfast even though, as a result of the Protocol, I am a second-class British citizen on that side of the Irish Sea.

“I am joining my fellow pro-unionists and some of their leaders at a rally in Lisburn to make our case.”

Mr Habib added: “It will be a privilege to share a platform with Sir Jeffrey Donaldson, Jim Allister and Baroness Hoey. But the real privilege will be addressing our kin in Northern Ireland.

“The burden to save the Union from the Protocol now falls to them. It is them that must make their voices heard. It takes courage to speak up but speak up I know they will.

“Westminster will hear the voice of Northern Ireland. If that voice is ignored, on Westminster’s head be it.”

Mr Poots, who last week ordered a unilateral halt to the agri-food checks, was responding to a Stormont Assembly question posed by Traditional Unionist Voice leader Jim Allister, who will also be at tomorrow’s rally.

A High Court judge has suspended Mr Poots’s direction to stop checks on incoming GB goods pending a full legal challenge into his decision next month.

Addressing the Assembly on Tuesday, the minister said the salary costs of the additional staff needed to complete the checks at Northern Ireland ports was around £4,447,500. He said that total included almost £1 million on agency staff.

He said the running costs of the checking facilities in Northern Ireland and the service contract for lorry seal checks carried out on the GB side of the Irish Sea totalled £4.2million.

He also pointed to £200 million the Government has invested in a Trade Support Service (TSS) to help companies deal with the customs processes required by the protocol.

He said: “So the cost of the protocol to Northern Ireland is huge. It’s extensive and you know that is why we need to get solutions.

“Because nobody realistically can argue that, as the protocol exists, it is good for Northern Ireland.

“You cannot have this burden placed upon business and this cost placed upon the taxpayer and claim it to be good.”