Home » Politics » Brexit LIVE: Don’t do this to us! Irish politicians panic after BAN from UK fishing water

Ireland: Leo Varadkar on 'tensions' with Scotland over Rockall

The vessel, the Northern Celt, was boarded by the Jura, a Marine Scotland patrol boat, and told not to fish within 12 miles of the rocky outcrop, a regular feature in Radio 4’s shipping forecast. Matt Carthy TD tweeted: “Irish governments have been consistent in their failure to protect Irish fishers. “That they, as recently as 2013, handed away Irish rights at Rockall may not be surprising but is still disgraceful.

“These are traditional fishing grounds. Livelihoods at risk.”

(SCROLL DOWN FOR REGULAR UPDATES) 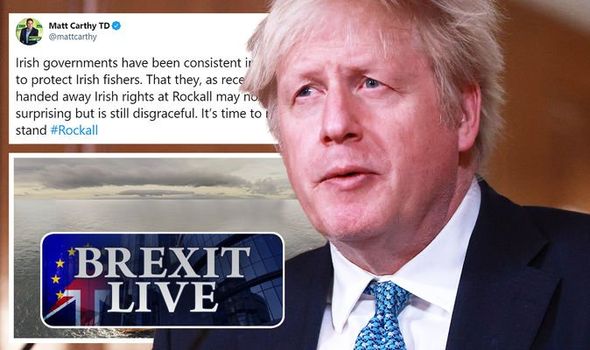 Earlier Padraig MacLochlainn TD tweeted: “In 2019, I warned the Government that the Rockall fishing dispute would be a real problem after Brexit.

“The shameful 2013 Agreement between the Irish and British government that recognised British sovereignty over the Rockall fishing waters has never been ratified by the Dail.”

Adrian McClenaghan, the ship’s captain, told Irish broadcaster RTE: “We were fishing in Rockall and members of the crew from the Jura boarded us.

“They informed us that we could no longer fish inside the 12-mile limit of Rockall.

“The Scottish navy are continuing to patrol the 12-mile limit and we’re waiting on further instructions from the Department of Foreign Affairs on what their next move will be.”

Britain will be denied access to the European Union single market unless it respects the rules laid down by Brussels in the trade and security deal, a French minister has warned.

Clement Beaune was responding to claims the UK had achieved a “total victory” against the EU in the last-ditch talks which led to the historic Christmas Eve agreement.

The French minister for European Affairs dismissed suggestions Boris Johnson had walked away from the negotiating table with a clean sweep of wins and claimed British fishermen were furious with the agreement he signed.

Mr Beaune also insisted Brexiteers had not been handed back the “total sovereignty” they had been promised.

He tweeted: “No British access to the EU market without respecting our rules, massive criticism of British fishermen against this agreement.”