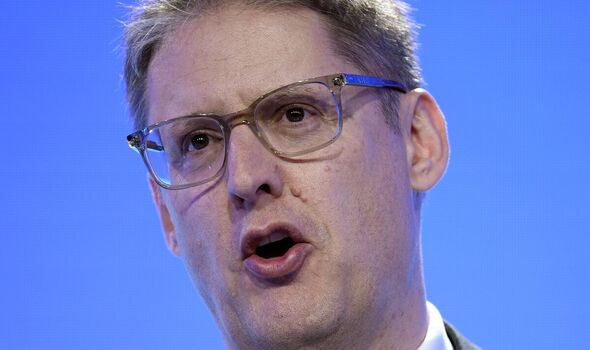 Rishi Sunak must face up to the big decision on the economy as the UK lags behind competitors, according to the CBI. Tory MPs are pushing for tax cuts in the March budget after the taxation burden hit its highest rate since the Second World War.

CBI director general Tony Danker believes the Prime Minister is “right to resist” calls for mass tax cuts but will say that means tough decisions must be taken to boost the economy.

In a speech, he will say: “The current CBI forecast is that the PM should comfortably hit his pledge of getting the economy growing by the end of the year by 0.1 percent. “But my argument is that if our policies today aim for 0.1 percent growth, it’s the most we’ll ever achieve.”

Mr Danker will warn the UK is becoming less competitive while international competitors in Europe, Asia and the US are “going hell for leather” on green growth.

“We are behind them now and seem to be hoping for the best,” he will add.

Mr Danker will warn that the spring budget on March 15 will be crucial in turning around the economy but there are fears the Government could “shy away from the hard decisions that can reverse the UK’s trajectory with a General Election on the horizon”.

The CBI chief will call for the government to focus on green growth as one of the major economic opportunities for the coming years.

Mr Danker will say the government’s labour market strategy must be the “boldest in the world” to cope with the mass staff shortages across the country.

He will say there are real opportunities for the UK to regulate markets more smartly than the European Union now Britain has left, but warned against rushing to ditch all Brussels-made regulations too quickly.

Mr Danker will also urge the government to renew the “super-deduction” system that incentivises businesses to invest in equipment.

He will say he is a “British boomster” but he will argue immediate action is needed to secure growth.

“Denial of where our economy is right now compared to our international competitors is the surest way to leave the UK’s growth prospects faltering this decade,” he will say.

Mr Danker will add: “Growth still matters. This is people’s livelihoods and life opportunities. The PM set out less than a year ago what is needed to transform our economy. The ideas are there. Let’s stop second-guessing ourselves and get on because there is money on the table to capture right now.”