It is now believed 2,000 vulnerable residents died over Easter alone – more than double the number initially thought. Speaking to the Daily Express, the Health Secretary promised to step up testing and to supply an unprecedented amount of personal protective equipment (PPE) to the brave staff fighting on the front line. Mr Hancock said the national emergency was finally highlighting the often unsung but vital work carried out by Britain’s army of selfless carers.

He said: “One of the things I’m most proud of during this terrible crisis is that people have held social care workers in such high esteem, alongside their colleagues in the NHS.

“Coronavirus is the most serious public health emergency this country has faced for a generation, and in this battle against this invisible killer our carers and our care homes are on the front line.

“I cherish our social care sector and will strain every sinew to make sure it has what it needs at this important time in our history.”

Mr Hancock also reiterated his pledge to massively increase testing by April 30 – in a week’s time.

He revealed three Lighthouse Labs are now up and running, testing tens of thousands of patient samples daily. The mega-labs, in Milton Keynes, Glasgow and Alderley Park in Cheshire, will also process swabs from key workers including NHS and social care staff.

Samples are being collected at 27 drive-through sites across the UK, with up to 23 more being set up. Mr Hancock called the completion of the Lighthouse Lab network “an historic moment”.

He said: “We have set out our ambition to meet the challenge of achieving 100,000 coronavirus tests a day by the end of the month. 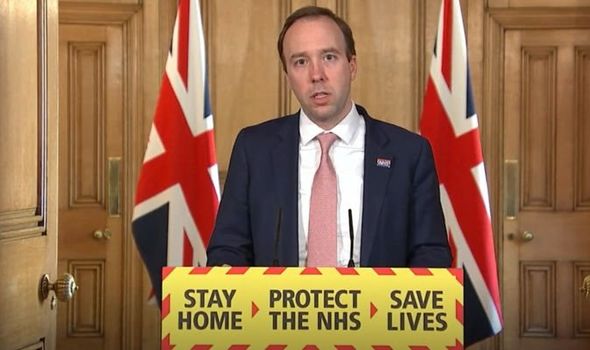 “This is truly a national effort, backed by Britain’s world-class scientists and industry partners, including teams of expert volunteers supporting the new mega-labs to rapidly increase our testing capacity.

“Together their efforts will allow key frontline workers testing negative for the virus to return safely to work.”

The Health Secretary also revealed that 22,000 care staff had been referred for tests, with appointments made for 13,000 more self-isolating or suffering symptoms. Meanwhile, PPE supplies are being increased in addition to the 29million items already made available to Britain’s 1.5 million social care providers. These include 11.4million facemasks, 13.3million aprons and 4.2million pairs of gloves.

Mr Hancock spoke as his department revealed 759 more people had died of coronavirus in UK hospitals. It brought the total up to 18,100.

But in care homes, deaths could be double the number initially reported, warned the Care Quality Commission (CQC) watchdog. In a joint Worry… Caroline Abrahams statement with Mr Hancock’s Department for Health and Social Care, the CQC said the number could be as high as 2,000 between April 11 – Easter Saturday – and April 15.

Every single day, our carers go to work to make a difference to people’s lives, and we are working to give them the recognition that they deserve

If true, this would be double the 975 deaths in care homes reported by the Office for National Statistics in the week ending April 10.

The actual figure is expected to be published next Tuesday, once it has been verified.

It could mean the total number of care home deaths since March, when the first deaths occurred, may have exceeded 6,000.There will also be deaths from non-Covid causes, including from failure to seek treatment for other ailments as lockdown measures take their toll.

Experts are now demanding that care home deaths are published daily, like those for hospitals.

Father-of-three Mr Hancock, 41, said: “New analysis from the CQC on deaths in care homes underlines the threat this virus can pose to the most vulnerable.

“So it is mission critical we give the best possible support to residents in our care homes and the 1.5 million dedicated professionals who work in social care.

“Every single day, our carers go to work to make a difference to people’s lives, and we are working to give them the recognition that they deserve. I have seen the amazing effects of good social care on elderly members of my own family.

“And I was in awe of the dedication with which they support our loved ones at their time of greatest need.”

He said: “The tragedy of what is happening in care homes needs to be a wake-up call for everyone.

“It should be a priority at national and local level to see they are given all the support we can muster.

“The NHS has done a remarkable job in treating very sick Covid-19 patients in hospitals, but we now have a further major challenge which is to protect and support some of the most vulnerable in our community and, importantly, those who are caring for them.

“The start of human trials of a vaccine provides a glimmer of hope. As soon as we get a vaccine, key workers must be given priority, alongside vulnerable groups.

“Of course we welcome the fact that there have been millions of drop-offs of personal protective equipment, but these will be used in a matter of days.

“And the reality is that many frontline workers across the NHS, including in primary, community and social care services, still do not feel safe.”

Caroline Abrahams, director of Age UK, said: “Hearing about the rising numbers of deaths in social care is heartbreaking and deeply worrying for anyone with a loved one living in a care home. It’s sadly way too late to avert this entirely but there’s still time to save many lives of staff and residents with proper PPE and accessible testing. Central and local government and the care-home sector must work together to make this happen and can start with presenting more accurate updates on the numbers of deaths occurring. As we have feared for some time, what’s going on in care homes – not only here but in many other countries too – is an absolute tragedy in the making.”

Sally Copley, of Alzheimer’s Society, said: “With the further report of a possible 2,000 deaths, this is a frightening time for everyone with relatives with dementia in care homes.

“The lives of people with dementia matter. And every death is a terrible loss to a grieving family. “The Government urgently needs to make up for lost time to put in place effective measures now, which will ensure we’re fully aware of the scale of the challenge, cut the number of deaths and ultimately keep people safe.”