Home » Politics » Coronavirus: MPs ‘alarmed’ by plans for them to return to parliament in person

The Speaker of the House of Commons has warned he could suspend sittings if too many MPs enter the chamber – should the government push ahead with ending “virtual” proceedings.

Parliament is currently operating under a “hybrid” system where a maximum of 50 MPs are allowed into the Commons chamber in person, while up to 120 can join debates remotely by the Zoom video conferencing app.

However, the government has announced it expects the current arrangements to come to an end next month, with MPs instead attending in person. 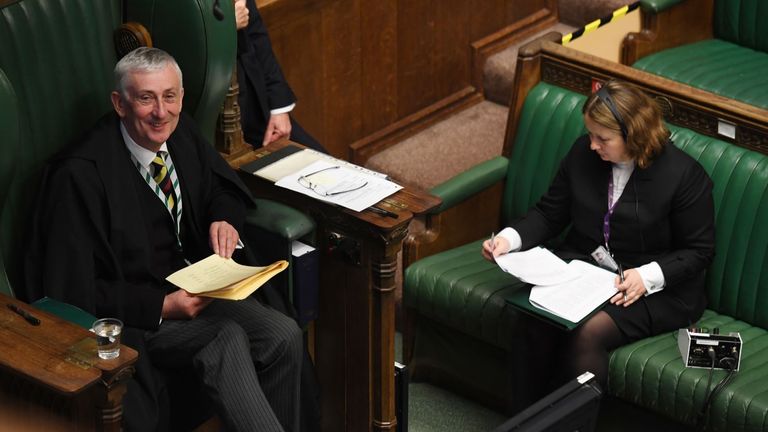 The Commons Speaker, Sir Lindsay Hoyle, on Wednesday assured MPs his “priority” was “to ensure that those on the estate are safe while business is facilitated”.

He said nothing in the government’s announcement, made by Leader of the House of Commons Jacob Rees-Mogg, “changes the position on social distancing in and around the chamber and throughout the parliamentary estate”.

“I may suspend sittings between items of business to allow safe access to and exit the chamber,” Sir Lindsay added.

“I’m also quite prepared to suspend a sitting if I believe the safe number of honourable members in the chamber risks being exceeded.”

Sir Lindsay suggested that MPs voting in person would take around 30 minutes, possibly up to an hour, in order to observe social distancing rules if electronic voting – which has been trialled – was no longer allowed.

Valerie Vaz, Labour’s shadow leader of the House of Commons, said she was “alarmed” by Mr Rees-Mogg’s announcement and asked why parliament should “contradict” the government’s own health advice by returning to “business as usual” in June.

“The House must lead the way in protecting the health and wellbeing of everyone who works in parliament by following public health advice to the letter,” she said.

The SNP’s Tommy Sheppard said it was a “fantasy” to believe that physical sittings could resume in June without special procedures being in place.

He asked what should happen to MPs considered among those most vulnerable to coronavirus, or Scottish, Welsh or Northern Irish MPs, whose devolved governments have not yet eased any lockdown measures.