PEORIA, Ariz. — Vice President Mike Pence, Joseph R. Biden Jr. and Senator Kamala Harris all touched down in Arizona on Thursday to rally supporters, a sign of the increasingly pivotal nature of a historically Republican state that is now up for grabs.

In dueling afternoon appearances on the second day of early voting in Arizona, Mr. Pence and the two members of the Democratic ticket appeared on opposite ends of metropolitan Phoenix, the booming desert mecca that will determine who wins the state and could decide the presidency.

One day after Ms. Harris and Mr. Pence met on the debate stage in a clash that was relatively civil, at least by the standards of this race, the two campaigns revived their well-honed talking points and attack lines in the 100-degree heat.

Mr. Pence, making his first solo campaign swing since President Trump tested positive for the coronavirus, assured a few hundred supporters who attended a parking-lot rally that Mr. Trump would be “be back on the road and in the fight before you know it.”

A few hours after his comments, Mr. Trump’s doctor issued a statement noting that Saturday would be 10 days since the president had first tested positive.

“I fully anticipate the president’s safe return to public engagements at that time,” said the physician, Dr. Sean P. Conley, effectively giving the antsy incumbent the OK to return to the campaign trail.

For the moment, though, Mr. Pence is handling those duties. He canceled an appearance in safely Republican Indiana, his home state, and planned to stump in Florida on Saturday. Mr. Pence is also heading to Ohio on Monday for the Columbus Day holiday. He planned to draw attention to Ms. Harris’s past criticism of the Knights of Columbus, the Catholic fraternal organization, and highlight Judge Amy Coney Barrett’s nomination to the Supreme Court.

On Thursday, the vice president, keeping his blue blazer on despite the searing heat, sought to convince Arizonans that they were on the rebound from the coronavirus after a summer surge of infections and job losses.

Noting that about half the jobs that were lost nationally had been regained and that the state’s unemployment rate had been halved, Mr. Pence proclaimed, “The Arizona and American comeback is underway!”

But there are few signs of a comeback here for Mr. Trump’s campaign.

Surveys of Arizona by The New York Times and Siena College in September and October showed the president polling at around 40 percent, a danger zone for an incumbent president so close to the election. Even if the president is able to win one of the three Great Lakes states — Michigan, Ohio and Wisconsin, with polls showing him trailing in all three — that decided the presidency in 2016, his path to re-election would be greatly imperiled if he cannot hold Arizona.

He’s struggling here in large part because women and nonwhite voters have flocked to Mr. Biden, who, along with Ms. Harris, sought to appeal to some of those voters on Thursday.

They met with Cindy McCain, the widow of Senator John McCain, and joined tribal leaders at a monument to Native Americans in Phoenix.

Later, at a socially distanced appearance at a carpenters union hall in the city, Mr. Biden unfurled his own set of coronavirus-related Arizona statistics.

Joseph R. Biden Jr. criticized President Trump for walking away from bipartisan coronavirus aid talks this week and for attempting to overturn the Affordable Care Act during the pandemic.

“We’ve paid too high a price already for Donald Trump’s chaotic, divisive leadership. More than 210,000 Americans have lost their lives to this virus. But on Tuesday, he announced he’s walking away from negotiations to provide additional relief for working people. Mom-and-pop businesses, schools, just go down the line. On Oct. 8, exactly two months since the emergency small business program was closed. Two months of small business owners in Arizona and across the country waiting and hoping for just a little bit of help to be able to stay open. More than 400,000 small businesses have permanently closed nationwide. 400,000. Millions are struggling to hang on. How many more have to go under? How many more dreams have to be extinguished because this president threw in the towel? Instead of focusing on your needs, he’s still trying to take away your health care. I mean, think about that. Just think about it. I mean if I, I’m not, but if I were a playwright and writing a play, there isn’t a single solitary outfit on Broadway that would take it. Because it sounds like ridiculous fiction. In the middle of a pandemic, when already 10 million Americans have lost their employer-based insurance because the employer went under, he’s trying to take away insurance from another 22 million people who got it for the first time. After all we’ve been through, all America’s accomplished, all the years we’ve stood as a beacon to the world, we cannot allow ourselves to remain divided. 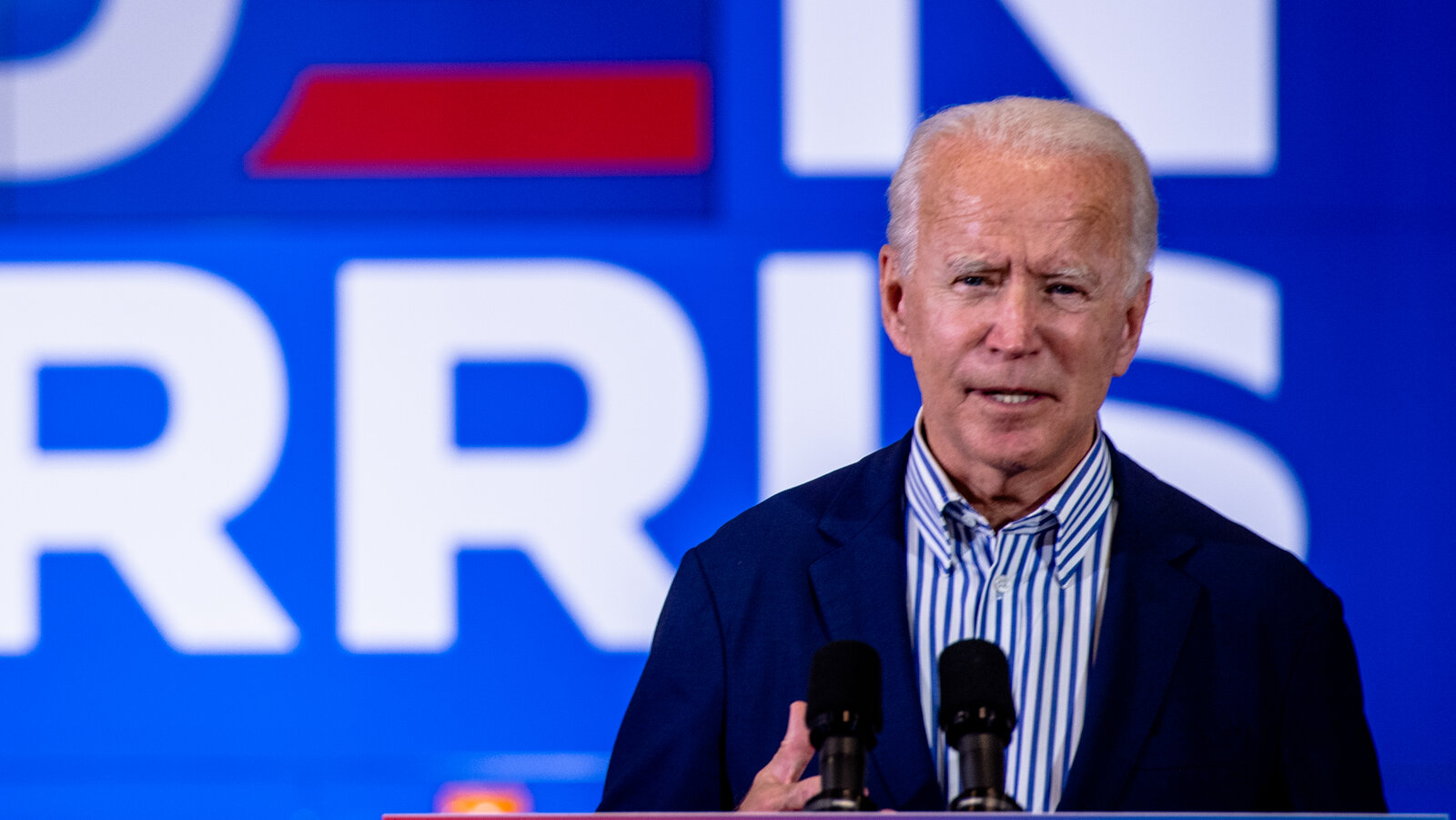 Mr. Biden also denounced the president for walking away from bipartisan talks in Congress over a coronavirus relief bill.

“How many more have to go under?” Mr. Biden said, his voice echoing in the union hall that was largely empty because of social distancing. “How many more dreams have to be extinguished because this president threw in the towel? If I were a playwright and writing a play, there’s isn’t a single solitary outfit on Broadway that would take it, because it sounds like ridiculous fiction.”

Acknowledging the support of Ms. McCain, who endorsed Mr. Biden last month, the former vice president recalled the 2018 eulogy for Mr. McCain that he delivered in Phoenix.

“We used to argue like hell,” Mr. Biden said of his relationship with his longtime Senate colleague, a Republican. “We were like two brothers — we’d fight like hell, but we always, always, always ended up together. And that’s how it used to be.”

In an earlier political day, it might have been unusual for three of the four people on the two major parties’ tickets to be stumping in Arizona less than a month before the election.

A Democrat has carried this state just once in recent history — Bill Clinton in his sweeping 1996 re-election — but a growing Hispanic population and suburban voters alienated by Mr. Trump have made Arizona more competitive. Senator Kyrsten Sinema, a Democrat, won her seat in 2018, and Democrats are favored to claim the state’s other Senate seat next month.

Introducing Mr. Biden, Ms. Harris plugged her party’s candidate for that seat. “Let’s send Mark Kelly to the Senate,” she said, referring to the former astronaut and first-time candidate who is challenging Senator Martha McSally.

The rare joint campaign-trail appearance by the Democratic ticket occurred a day after Ms. Harris’s debate outing, which is likely to be her most prominent appearance before Election Day. Mr. Biden praised her performance, saying she was “like a younger sister.”

“I tell you what, you got to give me great credit for knowing how to pick ’em, right?” he said.

As he neared the end of his address, Mr. Biden pleaded with Arizonans to vote.

“Early voting has already begun,” he said. And noting that mail-in ballots, which many voters here are accustomed to casting, would also soon arrive, he added: “The best thing you can do is return your ballot quickly. Don’t risk delays. Return that mail-in ballot as soon as you can.”

In his address, Mr. Pence made no mention of early voting or mail-in ballots, a delicate subject given Arizona’s history of voting by mail and Mr. Trump’s frequent condemnations of the practice.

But he did echo, if in less pungent language, the president’s frequent attacks on Mr. Biden, portraying the Democratic nominee as more liberal than he is willing to acknowledge and as somebody who would not commit to unwavering support of law enforcement.

“Joe Biden would double down on the very policies that have led to violence in America,” Mr. Pence said, citing the looting and arson that have occurred in some American cities this year.

Yet as he spoke to a sea of supporters, only about half of them masked, the president’s health was not far from mind.

“We are on track to have the first safe and effective coronavirus vaccine in tens of millions of doses before the end of this year,” Mr. Pence vowed.

Those in attendance said they hoped Mr. Trump’s current treatments would prove sufficient to restore his health.

They were careful, though, to say that he ought to be prudent about how he handles a virus that has touched the lives of almost every American.

Asked when Mr. Trump should return to his beloved rallies, Linda Stokke of Sun City, Ariz., said: “As soon as he gets a negative test.”

Then Ms. Stokke noted her own connection to the coronavirus.

“My son’s a doctor, so I’ve been well-schooled,” she said with a chuckle.

The Trump and Biden campaigns spent Thursday sparring over the debate schedule as President Trump objected to a plan for a virtual debate. Read the latest updates.