WILMINGTON, Del. — The teleprompters were set, the patriotic decorations assembled, and onlookers had been waiting for hours. Still, as the light faded behind an oversize American flag and the evening grew chilly, there was no sign of Joseph R. Biden Jr. on the elaborate stage from which his fans hoped he would declare victory.

And so last Friday concluded the way the previous three days had: After hours of anticipation among Mr. Biden’s supporters, a flurry of preparations by his team and mounting Democratic hopes for “Biden beats Trump” headlines, everyone in the vicinity of the Westin hotel in Wilmington, Del., would be left waiting on the result of the presidential campaign, again.

Or, perhaps, a lot of patience. Certainly, some of Mr. Biden’s earliest supporters had been waiting at least since his first presidential bid, in the 1988 campaign, to see him win the White House, so perhaps they were used to it. But not everyone had been standing by for quite so long, and the lurching uncertainty of what turned into an election week was an especially intense and vivid experience for Democratic staff members, Biden friends and family members, as well as journalists who spent much of the last week in Wilmington, near Mr. Biden’s home. 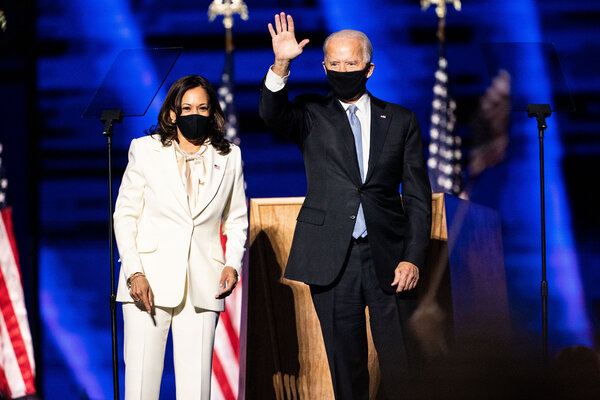 For the second time in three months, international attention turned to this city of around 70,000 along the Delaware River, where the Amtrak station is named for the president-elect and seemingly everyone has a story about running into one member of the Biden clan or another.

Wilmington first readied itself for prime time in the presidential campaign in August. The city hosted the culmination of the largely virtual Democratic National Convention, featuring in-person fireworks and a drive-in rally here after Mr. Biden accepted the nomination, but the event was over as advertised after that.

Last week, the spotlight stretched on as one election night extravaganza turned into four days of waiting before a winner was called.

On the original election night, last Tuesday, longtime Biden fans and neighbors showed up to a drive-in rally hoping to watch him and Senator Kamala Harris declare a landslide victory. They left anxious and edgy as President Trump prevailed in Florida instead, with the presidential race uncalled. Biden staff members who had plainly been expecting a valedictory speech that night were terse with the reporters who chased after them in the subsequent hours.

As the vote count stretched on in key battlegrounds across the country, the days in Wilmington settled into something of a rhythm, much like a day spent waiting in an airport for a long-delayed flight.

In the morning, the Biden team would project confidence and sometimes preview remarks, of some kind, from Mr. Biden. Throughout the day, mask-wearing journalists would scramble after sources who walked through the lobby of the Westin, momentary bursts of physical activity in an environment where leaving the security perimeter even for a sandwich or a mandatory coronavirus test was risky, in case news about a state came in.

Yet if any members of the news media or campaign staff felt nostalgic for the rituals of pre-pandemic political reporting, which often involved waiting around to corner someone in person instead of on a campaign-managed conference call, the bonus days of the election offered glimpses of that era.

At night, everyone waited.

The home base for the festivities was the Chase Center on the Riverfront, an event center near the Christina River — or, more specifically, the parking lot outside, which was transformed into the home of a drive-in gathering on election night, and then a second gathering on Saturday night once the race had been called by news organizations. Inside the center itself, Mr. Biden gave occasional remarks, urging patience and projecting calm even as his aides and donors grew increasingly impatient.

The lobby of the Westin next to the Chase Center became ground zero for spotting Biden aides and allies — an unfamiliar activity, given the virtual nature of the campaign for many months. In Democratic politics, it quickly became the most famous hotel lobby east of the Des Moines Marriott, traditionally an epicenter of political activity before the Iowa caucuses.

Steve Ricchetti, a longtime adviser, whirled through on Friday evening. Anita Dunn, a senior adviser, and Bob Bauer, the former White House counsel, dipped in and out. Senator Chris Coons, Democrat of Delaware and a close Biden ally, regularly held impromptu news conferences. Members of Mr. Biden’s team who typically sparred with reporters by phone or on television were swarmed for their latest in-person intel.

The entire area was turned into a fortified compound for election night and the days that followed, with imposing fencing keeping out the public. Outside the security barrier, Biden supporters sat on lawn chairs and at least one father and son slept in a car, hoping to get close enough to glimpse a possible president-elect. The onlookers traded Biden signs and shared doughnuts, and lucked out with unseasonably warm fall weather as the wait stretched on.

There was at least one casualty of election night turning into election week: an enormous American flag that hung from two cranes. After it had ripped and been mended once, it ripped again, and eventually a replacement flag was hoisted in its place.

On Saturday morning, 48 years to the day that Mr. Biden was first elected to the Senate, his sister, Valerie Biden Owens, walked through the Westin lobby.

“It’s wonderful,” she told a small group of reporters as she walked out the door. “It’s a wonderful thing for us, but it’s a better thing for America.”

A few minutes later, CNN called the race for her brother.

On the streets outside the security barrier, drivers leaned on their horns in celebration, passers-by responded with cheers and the smell of cigar smoke wafted.

And inside the Chase Center parking lot, attendees who had waited days to celebrate Mr. Biden at a drive-in rally were ready to display their joy. They waved glow sticks, affixed Biden signs to their cars and, in at least one case, left a Champagne bottle perched on top of a vehicle.

Mr. Biden opened his own remarks — the most important speech of his life — by giving the world an introduction to Delaware politics.

“Is that Ruth Ann?” he asked to cheers, referring to former Gov. Ruth Ann Minner.

At the end of his speech, the sky lit up with another name.

“Biden,” read the lights in the sky, courtesy of a drone light show. “President Elect.”