Home » Politics » Democrats Decried Dark Money. Then They Won With It in 2020.

A New York Times analysis reveals how the left outdid the right at raising and spending millions from undisclosed donors to defeat Donald Trump and win power in Washington. 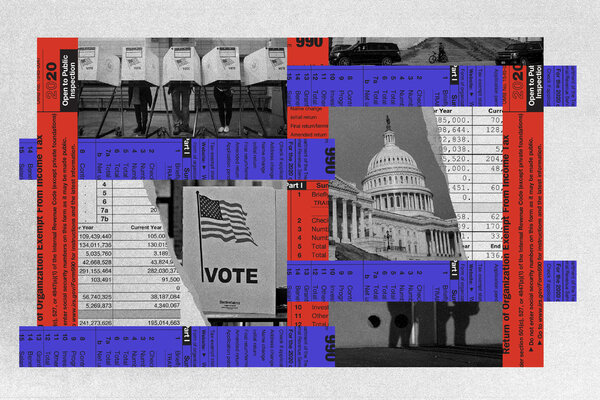 Ken Vogel’s reporting from Washington focuses on the intersection of money, politics and influence. Shane Goldmacher is a national politics reporter specializing in campaign finance.

For much of the last decade, Democrats complained — with a mix of indignation, frustration and envy — that Republicans and their allies were spending hundreds of millions of difficult-to-trace dollars to influence politics.

“Dark money” became a dirty word, as the left warned of the threat of corruption posed by corporations and billionaires that were spending unlimited sums through loosely regulated nonprofits, which did not disclose their donors’ identities.

Spurred by opposition to then-President Trump, donors and operatives allied with the Democratic Party embraced dark money with fresh zeal, pulling even with and, by some measures, surpassing Republicans in 2020 spending, according to a New York Times analysis of tax filings and other data.

The findings reveal the growth and ascendancy of a shadow political infrastructure that is reshaping American politics, as megadonors to these nonprofits take advantage of loose disclosure laws to make multimillion-dollar outlays in total secrecy. Some good-government activists worry that the exploding role of undisclosed cash threatens to accelerate the erosion of trust in the country’s political system.

Democrats’ newfound success in harnessing this funding also exposes the stark tension between their efforts to win elections and their commitment to curtail secretive political spending by the superrich.

A single, cryptically named entity that has served as a clearinghouse of undisclosed cash for the left, the Sixteen Thirty Fund, received mystery donations as large as $50 million and disseminated grants to more than 200 groups, while spending a total of $410 million in 2020 — more than the Democratic National Committee itself.

But nonprofits do not abide by the same transparency rules or donation limits as parties or campaigns — though they can underwrite many similar activities: advertising, polling, research, voter registration and mobilization and legal fights over voting rules.

The scale of secret spending is such that, even as small donors have become a potent force in politics, undisclosed money dwarfed the 2020 campaign fund-raising of President Biden (who raised a record $1 billion) and Mr. Trump (who raised more than $810 million).

Headed into the midterm elections, Democrats are warning major donors not to give in to the financial complacency that often afflicts the party in power, while Republicans are rushing to level the dark-money playing field to take advantage of what is expected to be a favorable political climate in 2022.

At stake is not just control of Congress but also whether Republican donors will become more unified with Mr. Trump out of the White House. Two Republican secret-money groups focused on Congress said their combined fund-raising reached nearly $100 million in 2021 — far more than they raised in 2019.

Have Your Say: Is Theresa May right on Brexit? Has Liz Truss acted illegally?