WASHINGTON — Senate Democrats on Friday worked to scale back the $400-a-week unemployment payments in President Biden’s $1.9 trillion stimulus plan, seeking to placate a crucial moderate in their own party who was threatening to defect and derail the new administration’s first major legislative initiative.

The dispute over the amount and duration of federal aid to millions of Americans who have lost jobs during the pandemic appeared to erupt largely because of Senator Joe Manchin III’s concern that an overly generous benefit could keep people from returning to work.

Seeking to keep the support of both the moderate and liberal wings of their party, Democratic leaders and Mr. Biden had agreed to reduce the benefits to $300 a week, but allow them to continue for an extra month, into early October. They also proposed to make a large portion of last year’s unemployment benefits tax-free.

But before the compromise was to reach the Senate floor for a vote, Mr. Manchin, of West Virginia, appeared to signal he was not sold on it. The impasse halted the stimulus measure in its tracks just as the chamber had begun a marathon series of votes on an array of proposals to change the bill. It reflected the strength of a small group of moderates who are crucial swing votes, and the difficulty of governing in a 50-to-50 Senate, where Democrats cannot afford to lose a single vote.

It was an awkward episode for Democratic leaders, who had been confidently predicting that the jobless aid deal they had worked out — with Mr. Biden’s blessing — would keep them unified and allow them to march forward, beating back Republican efforts to throw the bill off-track.

“The Senate is going to take a lot of votes, but we are going to power through and finish this bill, however long it takes,” Senator Chuck Schumer, Democrat of New York and the majority leader, vowed before the trouble began.

It was the second time in a week that leading Democrats, with the backing of the White House, had bowed to the wishes of moderates in their party in an effort to keep the sweeping stimulus measure on track. On Wednesday, they agreed to trim eligibility for another round of stimulus checks.

Still, the Senate fell into a period of paralysis on Friday, with a vote on an unrelated proposal to add a minimum-wage increase to the stimulus measure languishing for more than eight hours as Democrats stalled for time to iron out an agreement on the unemployment payments.

Hanging in the balance was Mr. Biden’s pandemic aid measure, one of the largest federal rescue bills of its kind, which would provide funding for vaccine distribution and schools, relief for small businesses and help for struggling Americans, including direct payments and the jobless aid.

Racing to have the bill signed into law before unemployment benefits begin to lapse on March 14, Democrats are using a fast-track budget process, known as reconciliation, to protect it from filibusters and push it through on a simple majority vote. With each party controlling 50 seats in the Senate, Democrats have only a one-vote margin thanks to Vice President Kamala Harris’s power to break ties. 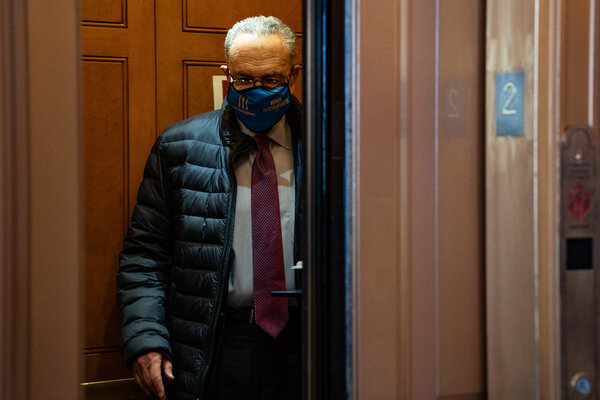 Democrats have already modified their proposal substantially to win over the centrists in their ranks. On Wednesday, they agreed to lower the income cap that determines who can receive a stimulus payment to $80,000 for individuals, $120,000 for single parents and $160,000 for households. Mr. Biden had proposed caps $20,000 higher.

The measure would send $1,400 checks to Americans earning $75,000 or less — or $112,500 for single parents and $150,000 for couples — with the stimulus payments falling gradually for those with incomes above those thresholds and disappearing altogether for those earning more than the income cap.

The proposed changes to the stimulus payments and jobless aid were two more blows to the hopes of progressive Democrats who had already been angry at the decision to omit a minimum-wage increase from the bill, after a top Senate official ruled it out of bounds based on the rules that govern reconciliation bills.

Liberal lawmakers and activists had argued that Democrats should overrule the official who issued the decision, the Senate parliamentarian, and push through the proposal anyway over Republican opposition. But Mr. Biden made clear he would not support that move, and on Friday, when Senator Bernie Sanders, independent of Vermont, tried to add it to the legislation, the wage increase did not appear to come close to mustering a majority, and it was poised to fall far short of the 60 votes that it would have needed to be adopted.

With the vote still pending after more than eight hours on Friday because of the impasse over the jobless aid, the measure to increase the minimum wage to $15 by 2025 had attracted only 42 supporters — and 58 opponents.

“If anybody thinks that we’re giving up on this issue, they are sorely mistaken,” Mr. Sanders told reporters. “If we have to vote on it time and time again, we will — and we’re going to succeed.”

While Republicans had made it clear they were ready to draw out debate on the stimulus package with all manner of amendments that were doomed to fail, it was also clear on Friday that there were issues far more significant than a minority united in opposition. Lawmakers in both parties quickly focused on Mr. Manchin, who has repeatedly called for the overall bill to be more targeted and who singled out the unemployment provision as an example.

It remained unclear precisely what concerns Mr. Manchin had with Democrats’ proposed compromise, whether it was merely the size and duration of the payments or a new provision that would forgive up to $10,200 in taxes on unemployment benefits received through in 2020.

Nor was it apparent whether he would instead endorse an alternative amendment by Senator Rob Portman, Republican of Ohio, that would keep the jobless payments at $300 and cut back the duration of the program, setting an end date through July 18.

“There’s bipartisan support for what Rob’s trying to do, and Manchin’s getting beat up by his side — you know, they’re trying to sort of get him into line so to speak,” Senator John Thune, Republican of South Dakota, told reporters. He added, “I think right now, arms are being twisted.”

At one point on the Senate floor, a few Democrats appeared to be engaged in an impassioned discussion about the provision with Mr. Manchin. The group at times included Senators Richard J. Durbin of Illinois, the No. 2 Senate Democrat, Brian Schatz of Hawaii, Catherine Cortez Masto of Nevada, Jon Tester of Montana and Kyrsten Sinema of Arizona.

Ms. Sinema, in particular, could be overheard counseling Mr. Manchin that he could vote for both amendments and noting that moderate Democrats had been successful in securing a number of revisions to the House measure.

Job Growth Will Slow Without a Stimulus Plan, Biden Says

President Biden said on Friday that growth shown in Friday’s jobs report is temporary, and that long-term economic recovery could stall without passing the $1.9 trillion relief package Congress is considering.

Today’s jobs report shows that the American Rescue Plan is urgently needed in our view. Our economy still has 9.5 million fewer jobs than it had this time last year. And at that rate, it would take two years to get us back on track. We have one million fewer educators, one million fewer educators than we did this time last year. We’ve lost 400,000 small businesses. All those empty storefronts aren’t just shattered dreams. They’re warning lights that are going off in state and local budgets that are being stretched because that lack of tax revenue. And some of last month’s job growth was a result of the December relief package. But without a rescue plan, these gains are going to slow. We can’t afford one step forward and two steps backwards. We need to beat the virus, provide a sense of relief and build an inclusive recovery. People need the help, now, in less than two weeks, enhanced unemployment benefits will begin to expire for 11 million people. At least seven million kids don’t have enough food to eat on a regular basis, 13 million people are behind in their rent. And the rescue plan is absolutely essential for turning this around, getting kids back to school safely, getting a lifeline to small business and getting the upper hand on Covid-19. 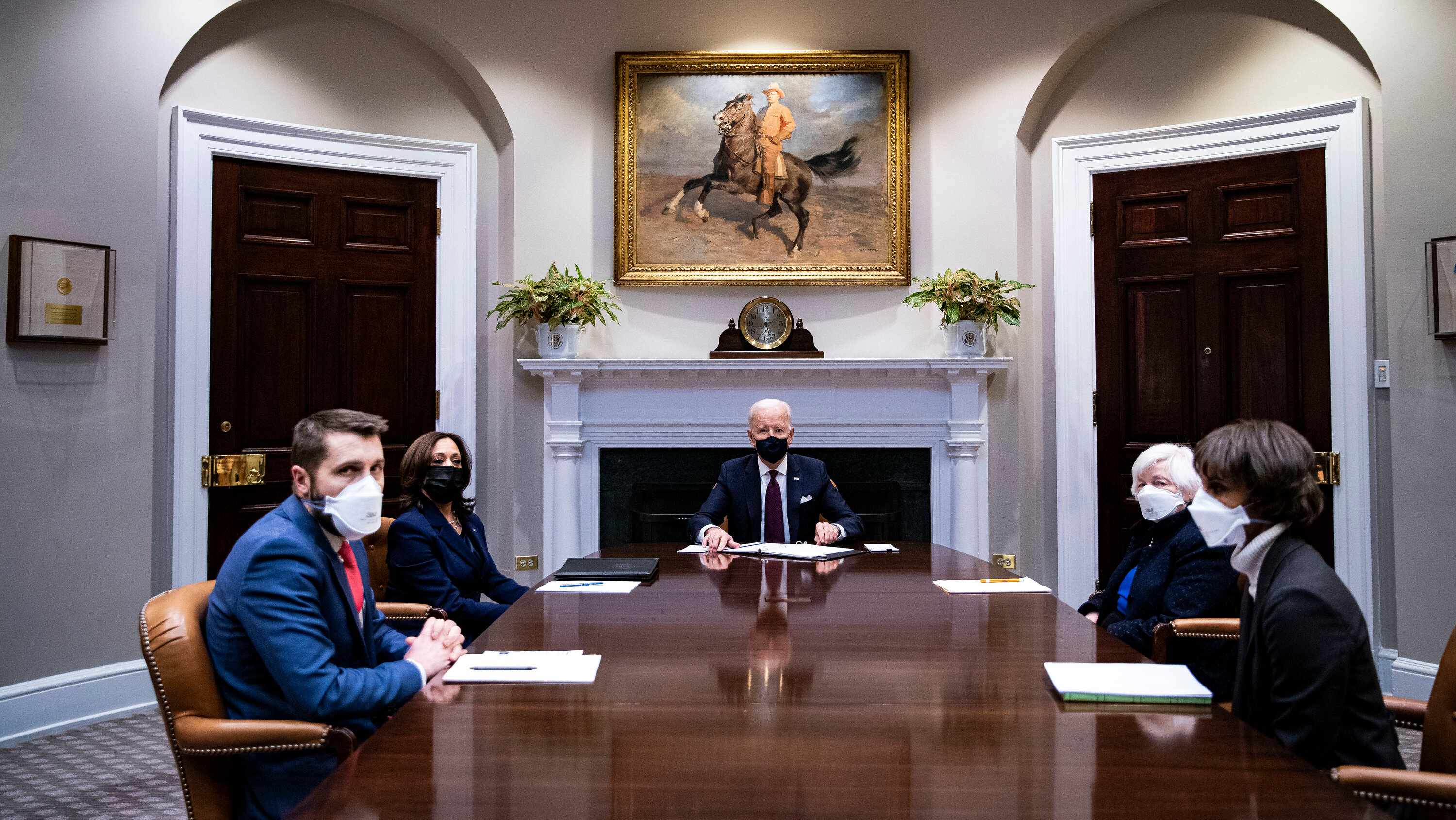 Chatting with the Senate clerks, who arrived at the Capitol after concluding a nearly 11-hour reading of the 628-page bill at 2:05 a.m., Ms. Sinema could be heard observing that “we decided to hit a speed bump early on” in the process.

Senate Republicans, having readied an arsenal of politically difficult amendments to prolong consideration of a bill they were powerless to stop, were gleeful over a delay they had not personally instigated.

“Chuck Schumer has officially lost control,” Senator Marsha Blackburn, Republican of Tennessee declared in a one-line statement from her office as action stalled on the floor.

They poked fun at Democrats’ feverish efforts to corral their moderates to support the bill.

“The public needs to know: Save Joe Manchin,” an ebullient Senator Lindsey Graham of South Carolina, the top Republican on the Budget Committee, told reporters with a smile.

The internal haggling among Democrats obscured a partisan brawl over the legislation, which Republicans have denounced as wasteful and derided as the product of bare-knuckled tactics by Democrats who refused to allow them any input.

“In this supposed new era of healing leadership, we’re about to watch one party ram through a partisan package on the thinnest of margins,” said Senator Mitch McConnell of Kentucky, the Republican leader. “We’re going to try to improve the bill. The millions who elected 50 Republican senators will have their voices heard loud and clear.”

But Democrats maintained that the legislation would inject a critical boost into the economy.

Senator Patty Murray of Washington, the No. 3 Senate Democrat, argued that Republicans opposing the plan did not understand the gravity of the pain being felt across the country. She cited high unemployment numbers and the toll on the mental health of children who cannot return to school.

“This country is on fire; the Republicans’ biggest concern is that we might use too much water,” said Ms. Murray, the chairwoman of the health committee. “Anyone who says this bill is too expensive needs to understand how much this pandemic has already cost our communities.”