Joe Biden never captured the hearts of Democratic voters in the way Barack Obama once did. But now that he is in office, he is drawing nearly universal approval from his party. 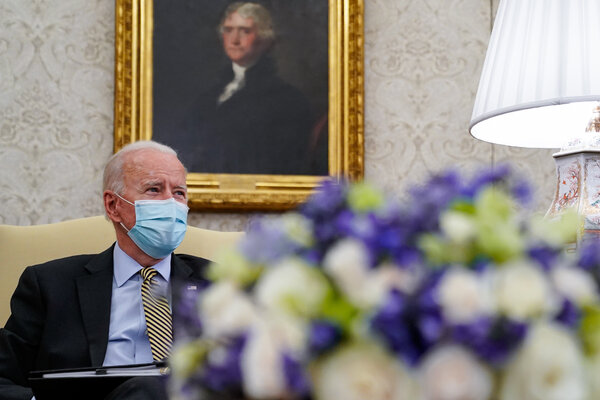 By Lisa Lerer and Giovanni Russonello

The old cliché has it that when it comes to picking their presidential candidates, Democrats fall in love. But the party’s primary race last year was hardly a great political romance: Joseph R. Biden Jr. drew less than 21 percent of the Democratic vote in the Iowa and Nevada caucuses and a dismal 8.4 percent in the New Hampshire primary.

While Mr. Biden went on to win his party’s nomination, he was never widely seen as capturing the hearts of Democratic voters in the way Barack Obama and Bill Clinton once did. For many of his supporters, he seemed simply like their best chance to defeat a president — Donald J. Trump — who inspired far more passion than he did.

Yet in the first few months of his administration, Mr. Biden has garnered almost universal approval from members of his party, according to polls, emerging as a kind of man-for-all-Democrats after an election year riddled with intraparty squabbling.

He began his term this winter with an approval rating of 98 percent among Democrats, according to Gallup. This represents a remarkable measure of partisan consensus — outpacing even the strongest moments of Republican unity during the presidency of Mr. Trump, whose political brand depended heavily on the devotion of his G.O.P. base.

And as Mr. Biden nears his 100th day in office, most public polls have consistently shown him retaining the approval of more than nine in 10 Democrats nationwide.

Pollsters and political observers mostly agree that Mr. Biden’s popularity among members of his party is driven by a combination of their gratitude to him for getting Mr. Trump out of office and their sense that Mr. Biden has refused to compromise on major Democratic priorities.