Prince Philip funeral: Queen appears to wipe away a tear

Warrington North MP Charlotte Nichols, the shadow equalities and women’s minister, Tweeted: “Campaigning suspended for today for the funeral of HRH The Duke of Edinburgh. “Took the opportunity to head into town to see friends & pick up a few bits now non-essential retail @GoldenSquareUK is back. Even the Primark queue v quick & good social distancing being observed! :)” The comment was described as “disrespectful” of the Duke and Queen and has been linked to historic footage of Labour leader Sir Keir Starmer saying he wants to abolish the monarchy.

A Conservative Party source said: “This is disrespectful from a member of Labour’s top team.

“As the country was coming together to pay tribute to one of our country’s greatest public servants they saw it as an opportunity to do anything but.

“With Keir Starmer having called for the monarchy to be abolished it’s quite clear that Labour don’t respect the Royal Family and aren’t willing to pay their respects on such a sad day.”

Prince Philip was today laid to rest in a poignant service curated by himself.

With coronavirus meaning only 30 people could attend the church service, royal commentators noted it would be what the Duke would have wanted as he stressed he “didn’t want a fuss” when he died. 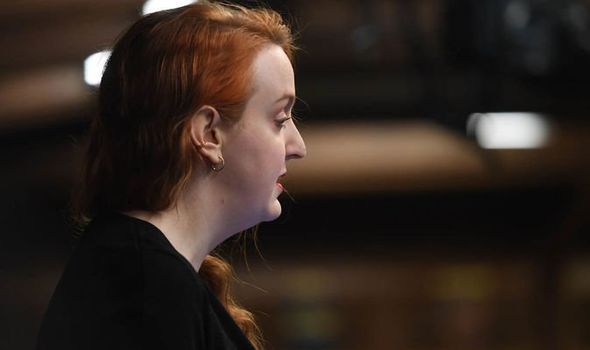 There were simple touches that reflected the man, his polished dark green four-wheeled carriage was parked so it was passed by the funeral procession – his cap, whip and brown gloves lay neatly on a folded blanket.

And the wreath of white blooms, including roses and lilies chosen by the Queen, placed on top of his coffin included a handwritten card, edged in black, from his wife the Queen of 73 years.

Cutting a solitary figure at the front of the quire, nearest the altar, the Queen sat apart from her children during the service in St George’s Chapel, while William and Harry were seated opposite one another.

In bright brilliant sunshine the funeral procession made its way through the precincts of the castle.

Philip’s children – Prince of Wales, Princess Royal, Duke of York and Earl of Wessex – walked behind his coffin carried by a Land Rover Defender hearse the Queen’s consort helped design. 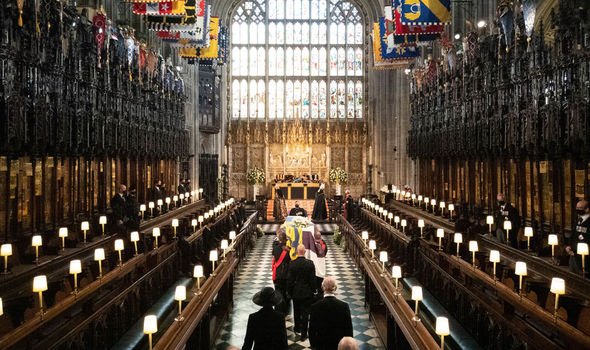 They were joined by the duke’s grandsons the Duke of Sussex, Duke of Cambridge and Peter Phillips and Vice Admiral Tim Lawrence, the Princess Royal’s husband, and the Queen’s nephew the Earl of Snowdon.

The royals walked in step as a military band played and all stared straight ahead into the sun as they made their way to the duke’s final resting place.

The Dean of Windsor, in the Bidding, paid tribute to Philip: “With grateful hearts, we remember the many ways in which his long life has been a blessing to us.

“We have been inspired by his unwavering loyalty to our Queen, by his service to the Nation and the Commonwealth, by his courage, fortitude and faith. 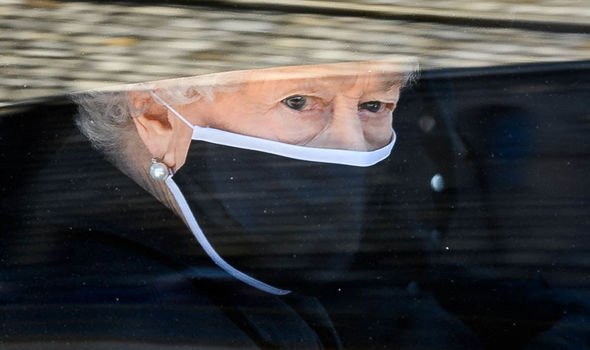 “Our lives have been enriched through the challenges that he has set us, the encouragement that he has given us, his kindness, humour and humanity.

“In the nearby nave the Last Post was sounded by buglers from the Royal Marines and a few moments later the Reveille was played by the State Trumpeters of the Household Cavalry.

Philip served as Captain General of the Royal Marines for more than six decades and at the end of the service the buglers sounded ‘Action Stations’.

The short piece was a fitting finale and is played on a warship to signal all hands should go to battle stations and is sometimes featured at funerals of naval men.

The national anthem was sung by the reduced choir as the service came to an end and as the royal family followed the Queen out of the chapel Harry glanced down at the opening to the royal vault.