In Loudoun County, Va., a group of parents led by a former Trump appointee are pushing to recall school board members after the school district called for mandatory teacher training in “systemic oppression and implicit bias.”

And across the country, Republican-led legislatures have passed bills recently to ban or limit schools from teaching that racism is infused in American institutions. After Oklahoma’s G.O.P. governor signed his state’s version in early May, he was ousted from the centennial commission for the 1921 Race Massacre in Tulsa, which President Biden will visit on Tuesday to memorialize one of the worst episodes of racial violence in U.S. history.

From school boards to the halls of Congress, Republicans are mounting an energetic campaign aiming to dictate how historical and modern racism in America are taught, meeting pushback from Democrats and educators in a politically thorny clash that has deep ramifications for how children learn about their country.

Republicans have focused their attacks on the influence of “critical race theory,” a graduate school framework that has found its way into K-12 public education. The concept argues that historical patterns of racism are ingrained in law and other modern institutions, and that the legacies of slavery, segregation and Jim Crow still create an uneven playing field for Black people and other people of color.

Many conservatives portray critical race theory and invocations of systemic racism as a gauntlet thrown down to accuse white Americans of being individually racist. Republicans accuse the left of trying to indoctrinate children with the belief that the United States is inherently wicked.

Democrats are conflicted. Some worry that arguing America is racist to the root — a view embraced by elements of the party’s progressive wing — contradicts the opinion of a majority of voters and is handing Republicans an issue to use as a political cudgel. But large parts of the party’s base, including many voters of color, support more discussion in schools about racism’s reach, and believe that such conversations are an educational imperative that should stand apart from partisan politics.

“History is already undertaught — we’ve been undereducated, and these laws are going to get us even less educated,” said Prudence L. Carter, the dean of the Graduate School of Education at the University of California, Berkeley. Attempts to suppress what is still a nascent movement to teach young Americans more explicitly about racist public policy, like redlining or the Chinese Exclusion Act of 1882, amount to “a gaslighting of history,” she said, adding, “It’s a form of denialism.”

The debate over the real or perceived influence of critical race theory — not just in schools but also in corporate, government and media settings — comes as both parties increasingly make issues of identity central to politics. And it accelerated during the presidency of Donald J. Trump, when discussions over racism in the country were supercharged by his racist comments and by a wave of protests last year over police killings of Black people.

Some of the discussion has been fueled by the 1619 Project, developed by The New York Times Magazine, which argues that “the country’s very origin” traces to when the first ship carrying enslaved people touched Virginia’s shore that year. “Out of slavery — and the anti-black racism it required — grew nearly everything that has truly made America exceptional,” the magazine’s editor wrote.

Educators have embraced curriculums created along with the project, responding to a changing nation in which a majority of public-school students are now nonwhite, but the teaching force remains nearly 80 percent white. 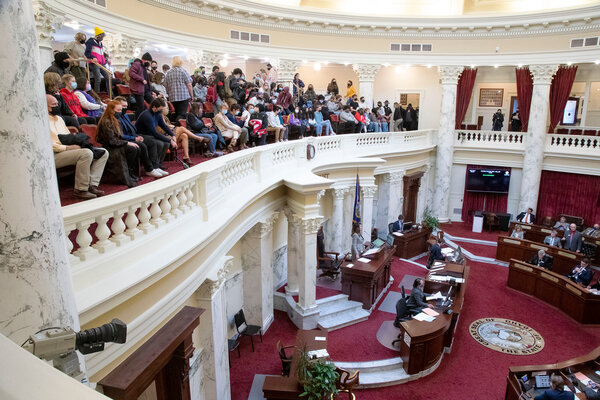 Republican pushback has been intense. Senator Mitch McConnell of Kentucky, the G.O.P. leader, said recently that he disagreed that 1619 was important in U.S. history. He and other Republican senators are pushing the Biden administration to drop efforts by the Education Department to prioritize history courses that emphasize “systemic marginalization” of peoples.

In Ohio, Republicans in the General Assembly introduced a bill last week to ban teaching that any individual is “inherently racist,” that any individual “bears responsibility for actions committed in the past by the same race or sex,” or that the advent of slavery “constitutes the true founding” of the United States.

“Critical race theory is a dangerous and flat-out wrong theory,” State Representative Don Jones, the bill’s lead sponsor, said in a statement. “Students should not be asked to ‘examine their whiteness’ or ‘check their privilege.’”

Mr. Jones, in an interview, could not cite any examples of such teaching taking place now in Ohio. He said his bill was a response to voter concerns.

Although parents have appeared before school boards in Ohio and elsewhere to object to critical race theory, calling it “Marxist,” many school administrators vehemently deny that they are teaching the subject, or are being influenced by it. They say that much of what conservatives object to amounts to little more than more frequent and frank discussions of subjects like slavery. Parents are also pushing back against the loosely related trend of anti-bias training for students and staff members, which has led to dust-ups across the country.

A biracial student sued his Las Vegas charter school for requiring him to take a sociology course that asked students to list their various racial and gender identities, and that named institutions like family and religion as oppressive. A Republican candidate for Senate in Ohio, Jane Timken, said that during a listening tour of the state, she had heard a parent object that second-graders were made to draw pictures of themselves as a different race.

Republicans’ attacks on critical race theory are in sync with the party’s broad strategy to run on culture-war issues in the 2022 midterm elections, rather than campaigning head-on against Mr. Biden’s economic agenda — which has proved popular with voters — as the country emerges from the coronavirus pandemic.

Because the nation’s three million public-school teachers have a great deal of autonomy over what happens in classrooms, legislation will most likely be ineffective in controlling how children are exposed to concepts of race and racism, said Robert Pondiscio, an education expert who in June will join the center-right American Enterprise Institute, a think tank.

Still, he said, the controversy over critical race theory serves a purpose in warning educators to tread carefully on a divisive subject. “People have strong feelings about the degree to which race should be central to a kid’s educational experience,” he said.

State social studies standards and textbooks have been updated to highlight subjects like redlining and the internment of Japanese-Americans during World War II.

Historically, curricular changes have often drawn backlashes, said Albert S. Broussard, a historian at Texas A&M University and an author of middle and high school American history textbooks. “It’s what we as historians have seen throughout African-American history when whites — particularly conservatives — feel they have lost control,” he said.

Conservatives and even some liberals have said that discussions of race are crowding out the traditional curriculum and are encouraging students and teachers to see themselves less as individuals and more as members of identity groups.

In North Carolina, Republicans who control the state House of Representatives passed a bill in May to limit teaching that the country was “created by members of a particular race or sex to oppress members of another race or sex.”

The bill was a response to new social studies standards adopted by the state Board of Education that include themes of systemic racism. But State Representative James D. Gailliard, a Democrat who opposed the bill, said that the legislation told historically overlooked Americans that “we want to strip you of your right to tell your story.”

To recognize that systemic racism endures in America, he said, one need look no further than how it is often harder for Black home buyers to acquire mortgages than it is for white people of equal means. “The whole point of systemic racism is, once it’s embedded in our power structure, it works on its own,” he said in an interview. “You don’t need to wear a K.K.K. cloak.”

Still, he acknowledged that Republicans had “figured out how to message this.”

The messaging goes back to Mr. Trump, who, in the final weeks of the 2020 campaign, announced the formation of the 1776 Commission, set up explicitly to link what he said was “left-wing indoctrination” in schools to the sometimes violent protests over police killings.

A report by the commission was derided by mainstream historians; Mr. Biden canceled the project on his first day in office, but its impact endures on the right.

Media Matters for America, a liberal group, documented a surge of negative coverage of critical race theory by Fox News beginning in mid-2020 and spiking in April, with 235 mentions. And the Pew Research Center found last year that Americans were deeply divided over their perceptions of racial discrimination. Over 60 percent of conservatives said it was a bigger problem that people see discrimination where it does not exist, rather than ignoring discrimination that really does exist. Only 9 percent of liberals agreed.

Some Democratic strategists said the issue was a political liability for their party. Ruy Teixeira, a senior fellow at the left-leaning Center for American Progress, recently wrote, “The steady march of ‘anti-racist’ ideology” into school curriculums “will generate a backlash among normie parents.”

In an interview, he criticized leading Democrats for not calling out critical race theory because of their fear that “it will bring down the wrath of the woker elements of the party.”

In Loudoun County, Va., dueling parent groups are squaring off, one that calls itself “anti-racist” and the other opposed to what it sees as the creep of critical race theory in the school district, which enrolls 81,000 students from a rapidly diversifying region outside Washington.

After a 2019 report found a racial achievement gap, disproportionate discipline meted out to Black and Hispanic students, and the common use of racial slurs in schools, administrators adopted a “plan to combat systemic racism.” It calls for mandatory teacher training in “systemic oppression and implicit bias.”

But what the school district called “equity work,” some parents perceived as the advance of critical race theory into classrooms.

A parent group began a petition drive in April to recall six of nine school board members. The effort is led by Ian Prior, a former political appointee in the Trump administration, who created a political action committee that he said had raised about $50,000 in small donations. It gathered signatures in May at the Trump National Golf Club in Sterling, Va.

“What we’re seeing is a focus less on individuals, who they are and their unique experiences, but more about identity groups and putting everybody into an identity box,” Mr. Prior said.

The district’s interim superintendent, Scott A. Ziegler, denied that critical race theory was part of the curriculum or teacher training.

“We are making a better environment for our students.”