MACON, Ga. — Senator Kelly Loeffler issued a now-familiar warning during a campaign event on Wednesday in Bibb County: If Democrats win the Georgia Senate runoff elections, there will be little left to stem a rising tide of extremist socialism in America.

But Dale Washburn, a Republican state legislator who introduced Ms. Loeffler at the event, had another warning. This one was based not on ideology, but on numbers that suggest Democrats are outpacing Republicans in early voting turnout — which means that Republicans may need a tremendous election-day performance on Jan. 5 if they are to win the state’s two high-stakes runoff races and maintain control of the Senate.

“We’re fully aware of the energy on the other side, and think we’ve been reminded about that,” Mr. Washburn said. “We know demographics have changed in recent years. And if our side hasn’t been aware of that, they’re rapidly becoming aware of that. The Biden victory had a big part.”

Less than a week before election day, the last-minute challenges, messages and strategies for the two parties in Georgia’s runoffs are coming into focus, even as polls indicate that the elections are too close to call. Those messages will be hammered home on the day before the elections by President-elect Joseph R. Biden Jr., who plans to campaign on Monday in Atlanta, and by President Trump, who will hold a rally on the same day in Dalton, a city in northwest Georgia.

However, some Republicans are increasingly worried that Mr. Trump, who continues to make the baseless claim that he lost Georgia because of a rigged voting system, is sending confusing signals to his followers that may serve to keep them home on election day. On Wednesday, Mr. Trump on Twitter pushed for the resignation of Gov. Brian Kemp, a staunch conservative and Trump supporter who has declined to take steps to overturn the state’s election results.

The president argued that Mr. Kemp was an “obstructionist who refuses to admit that we won Georgia.”

As Mr. Trump continues to foment a backward-looking drama, Ms. Loeffler and her fellow Republican candidate, Senator David Perdue, have crisscrossed the state, warning of an ominous future if their Democratic opponents, the Rev. Raphael G. Warnock and Jon Ossoff, prevail. Speaking on Fox News on Tuesday, Mr. Perdue said the Republicans were a “last line of defense” against centralized government, comparing his struggle to military conflicts like World War II.

On “Fox & Friends” on Wednesday morning, he added: “We’re winning this race right now. Kelly and I are all over this state. We’re running against two of the most liberal candidates that the Democrats have ever put up.”

Democrats, for their part, have been crafting messages that they hope will resonate with African-Americans, a constituency crucial to Mr. Biden’s narrow victory in Georgia in November. One TV ad released on Wednesday for Mr. Ossoff featured former President Barack Obama, who says that Mr. Ossoff will pass a new voting rights act if elected, while the musician John Legend plays a rendition of “Georgia on My Mind.”

But it is the numbers from early in-person and absentee voting that are particularly troubling for many Republican operatives in the state. Since the start of early voting on Dec. 14, more than 2.5 million Georgians have cast their votes, and the breakdown appears to be mostly good news for Democrats. (The early voting period runs through the end of Jan. 1, but Georgia counties may choose to close polling sites in observance of holidays on New Year’s Eve and New Year’s Day.)

The breakdown of votes so far shows that vote-rich Democratic strongholds, including Fulton and DeKalb Counties in metropolitan Atlanta, are posting high numbers, while African-Americans statewide are “voting their weight and then some,” said Charles S. Bullock III, a political scientist at the University of Georgia.

At the same time, Dr. Bullock noted, turnout has been weak in the northwestern part of the state, which is home to many working-class white Trump supporters. In Walker County, which Mr. Trump won with 79 percent of the vote, the turnout, as of Wednesday, was only 47 percent of the general election total, according to the website georgiavotes.com. 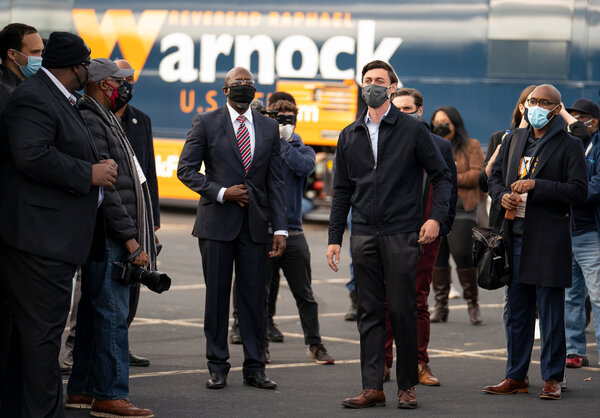 That may explain Mr. Trump’s decision to hold his rally on Monday in Dalton, a city known for its flooring and carpet manufacturing. It is also in the heart of the congressional district recently won by Representative-elect Marjorie Taylor Greene, the Republican best known for espousing elements of the QAnon conspiracy theory.

Mr. Trump announced the rally on Dec. 19. Democrats countered on Wednesday with their announcement that Mr. Biden would campaign on the same day in Atlanta. On Sunday, Vice President-elect Kamala Harris also plans to hold an event in Savannah.

Ms. Harris’s visit will most likely serve as a force multiplier for Democrats in Savannah, with a leading Black Democrat visiting a predominantly Black city to stump for Mr. Warnock, who is also Black and is a Savannah native. The move demonstrates how Democrats have embraced a strategy espoused by Stacey Abrams, the party’s former candidate for governor, that emphasizes paying attention to, and spending money turning out, the state’s minority voters.

While that strategy appears to have given Democrats an early edge, it remains to be seen if it will be enough to counter a surge of Republican voters who are probably waiting until election day to turn up at the polls, as has traditionally been the case.

“Democrats have shown up for the early vote, and the overt emphasis on Black voters has seemingly paid off,” Brian Robinson, a Republican strategist based in Georgia, said in a text message on Wednesday. “Republicans, though, still have a lot of votes out there they can get, particularly in northwest Georgia, where Trump is going Monday. The G.O.P. candidates will win handily among election day voters, so the bigger the turnout on Tuesday, the better the Republican chances.”

But Republicans had similar hopes for Mr. Trump in the general election, in which he fell short by about 12,000 votes in Georgia. And it is unclear whether Mr. Trump, in his visit to Dalton, will end up motivating his followers or causing more headaches for Republicans.

Mr. Trump’s tweet calling for Mr. Kemp to resign was already commanding some of the political spotlight on Wednesday. At a hastily convened news conference, Mr. Kemp did not address Mr. Trump’s comments directly, saying he would not be “distracted” from his goal of electing Mr. Perdue and Ms. Loeffler. The governor also said he was too focused on responding to the coronavirus pandemic to become involved in political infighting.

“That horse has left the barn in Georgia,” Mr. Kemp said of Mr. Biden’s victory in Georgia — dismissing Mr. Trump’s false claims that the state’s election was tainted by fraud.

How the jockeying plays out will not only affect the balance of power in Washington but also offer the first hints at how both parties navigate the post-Trump political future. Mr. Trump has proved to be a unique motivator of the Republican base, and the party is yet to find a figure who is equally adept at maximizing turnout among white conservatives.

Democrats are eager to prove that Mr. Biden’s success in November was not a fluke, and that voters want a robust liberal agenda rather than the Republican-led obstructionism that defined Mr. Obama’s administration.

Mr. Ossoff, who is facing off against Mr. Perdue, has sought in particular to make the election a referendum on Republican inaction on the pandemic. The latest issue at hand this week was whether the Republican senators would support a Senate vote on giving Americans stimulus checks of $2,000 rather than $600, a prospect that Senator Mitch McConnell, the majority leader, appeared to dash on Wednesday.

“People are in dire straits,” Mr. Ossoff said. “And if Senators Perdue and Loeffler — who are in the majority, and, let’s be clear, it’s the majority that controls floor action — and if they are serious about $2,000 relief checks for the people, then they should put maximum pressure on Mitch McConnell to move that legislation immediately.”

In a gaggle at her event in Macon, Ms. Loeffler avoided the question. Though she has said she supports the increased stimulus checks, she avoided placing pressure on Senate Republican leaders to bring forth the issue on the floor without caveats. Ms. Loeffler also avoided another hot-button Republican issue: whether to object to the presidential results on Jan. 6, when the Senate must ratify the Electoral College outcome.

“Leader McConnell and I have spoken about bringing another relief package,” Ms. Loeffler said. “But we’re in this situation because Democrats have blocked relief throughout this summer.”

Her carefully chosen words highlighted her current political pickle. In both Georgia and Washington, siding with Mr. Trump can also mean being in direct opposition to Republicans like Mr. McConnell or Mr. Kemp.

Mr. Washburn, the state representative, said the infighting among Republicans had made operating in the state more difficult.

He said he worried that the discord, and the Republicans who have questioned whether their votes will count in the runoffs, were hampering turnout for the party.

“Obviously we would prefer to have complete unity, but the situation is what it is,” Mr. Washburn said. “And we have to tap down any conversation that your vote doesn’t matter. Because it does matter.”