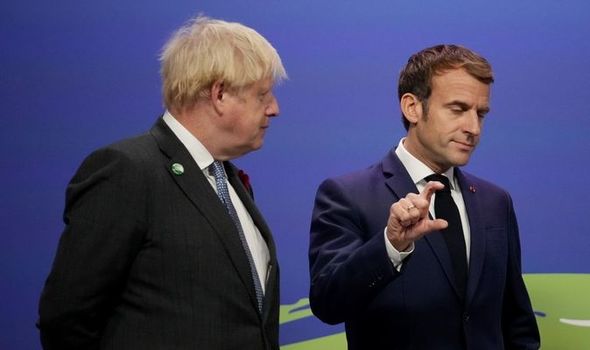 The French President also denounced the Prime Minister’s behaviour in diplomatic discussions as always “the same circus”, it was claimed.

The reports said the PM had privately admitted to Mr Macron he had to cater to “public opinion” by creating conflicts with the French to deflect the supposedly negative effects of Brexit.

Attitude “Johnson has the attitude of a good-for-nothing.”

According to the satirical magazine Le Canard Enchaine (The Chained Duck), Mr Macron vented his feelings during a trip to Croatia last Thursday, the day after 27 migrants drowned in a Channel crossing tragedy.

“As soon as he arrived in Zagreb on 25 November, Macron spoke to Boris Johnson on the phone about the tragedy in Calais,” said an article in the magazine.

During the chat, the French President’s aides learned the Prime Minister had published on Twitter a letter to the Elysee Palace with proposals for tackling the Channel crisis.

Mr Macron was said by the magazine to be incensed. He was reported to have told aides: “Bojo talks to me, he’s down to earth, everything’s fine, we’re having grown-up discussions – and then he sticks it to us, either beforehand or afterwards, in an inelegant manner. It’s always the same circus.”

Elaborating on his theme, Mr Macron was said to have argued that Brexit was to blame for increased tensions between Paris and London. The President allegedly said: “Very quickly, he realised that the situation was catastrophic for the British.

“There’s no petrol in the pumps, there’s a whole bunch of stuff missing.

“He positions himself as a victim, he makes France a scapegoat, he tries to turn every simplistic situation into a complex problem. We have been in this situation since March.”

Mr Macron said the Prime Minister had behaved in the same way in the dispute about post-Brexit trade rules in Northern Ireland and in rows about fishing rights. Mr Macron was quoted as saying of Mr Johnson: “In private, he says he is sorry to act this way, but he admits that above all he must respond to public opinion.”

Number 10 officials last night said the PM and the President had a close “working relationship”.